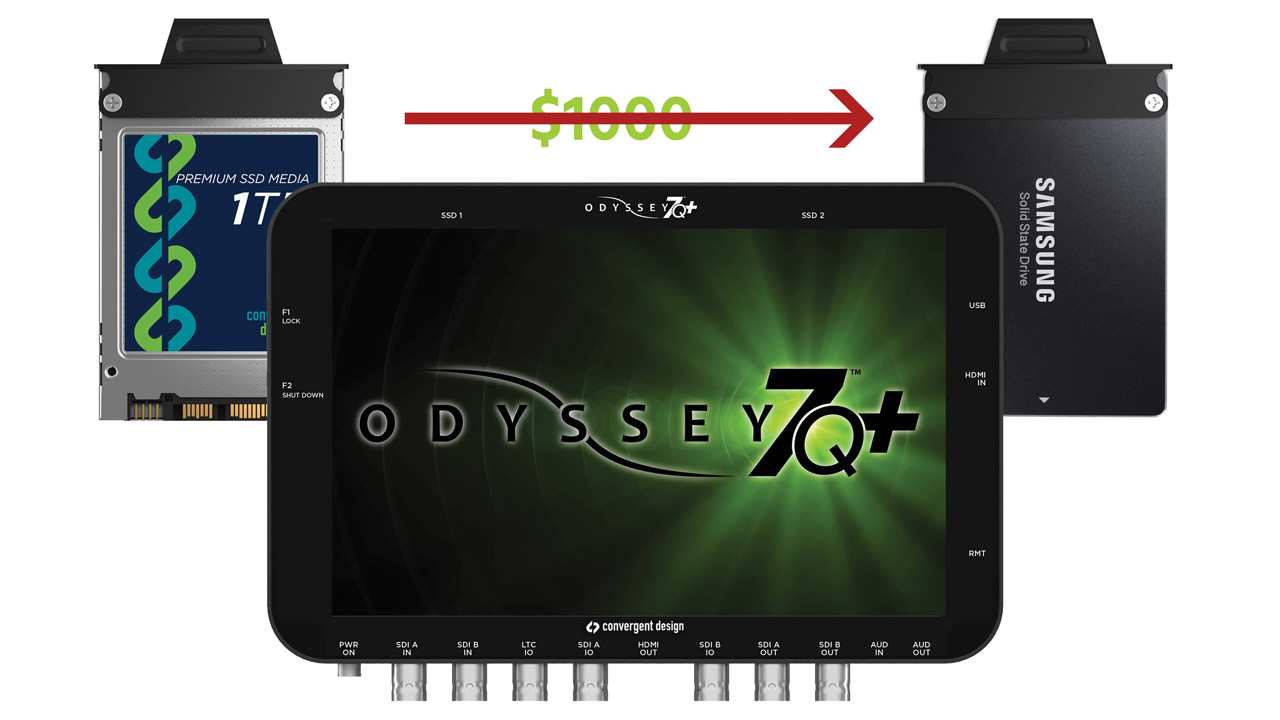 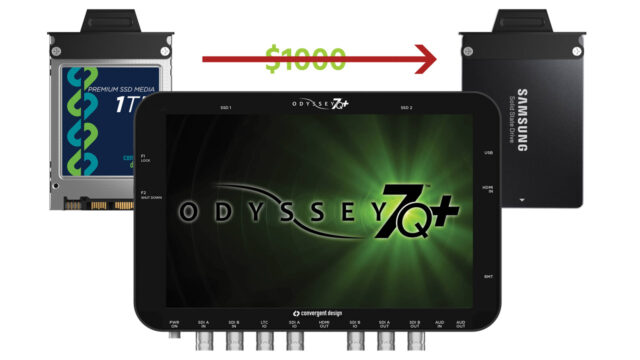 [UPDATE] The new firmware for the Odyssey7Q+ is now available:
Download Odyssey Firmware 2015.7

Convergent Design just announced a new free firmware update for the Odyssey7 and Odyssey7Q+ recorders and a major revamp of their Odyssey7Q+ SSD support and prices.

The Convergent Design Odyssey7Q+ OLED Monitor & Recorder is for many still the gold standard of disk recorders. Especially when it comes to recording RAW slow motion from cameras like the Sony FS700 or Sony FS7 it delivers astonshing results in a reliable and ergonomic package.

A few months ago the Atomos Shogun joined the market of 4K recorder and offered a significantly more affordable package. While it cannot record slow motion, just 2 days ago Atomos released an update that enables recording via the Sony cameras’ RAW outputs. 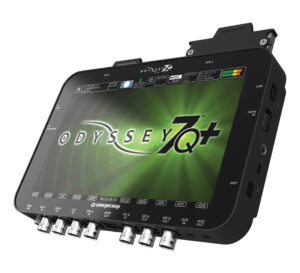 At $2.295 the Odyssey7Q+ is $600 more expensive versus the Shogun (Barebones Edition) that comes in at $1.695. The real difference however lies in that features have to be purchased individually on the Odyssey and the proprietary recording media has been significantly more expensive so far.

With the new upgrade Convergent Design opens up their recording media compatibility to third party manufacturer Samsung. This way some specific versions of Samsung SSD’s can be used with the recorder.

As you can see the Samsung 850 EVO 1000GB is the best value for the byte. In comparison to the proprietary Convergent Design media which was $1.395, this is a huge price advantage and makes the Odyssey 7Q+ all that much more attractive again.

Note that in order to record slow motion from one of the aforementioned Sony cameras you will need:

So a working package of this kind for the Sony F cameras with 2x 128GB would still cost a total of $3.488. In comparison you could get an Atomos Shogun (Barebones Edition) with a 256GB SSD for $1.804 [Updated], but it will not offer the slow motion or RAW recording capabilities.

Convergent Design also announced that they are lowering prices on their proprietary media by up to 44% and also that from now on a 256GB SSD, as well as 5 empty SSD caddies will be included with every new Odyssey7Q+ recorder.

The new firmware 2015.07 will be coming soon via the Convergent Design website.