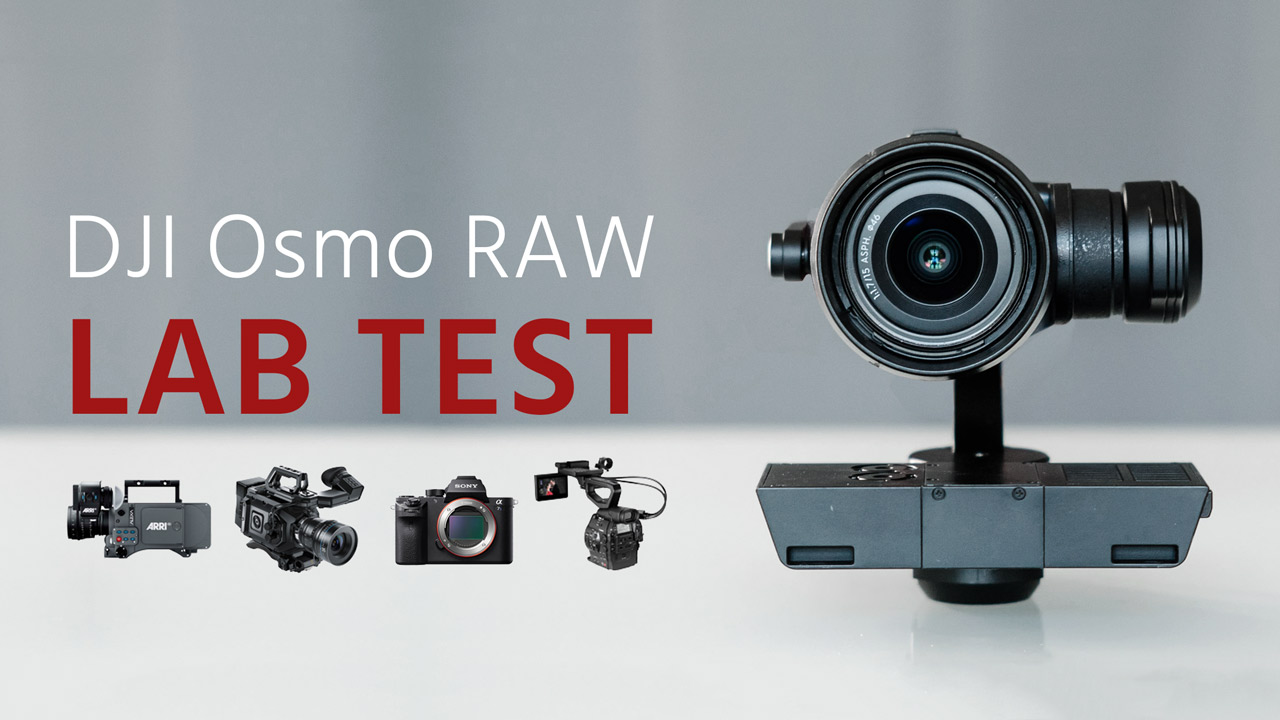 The DJI Osmo RAW has finally arrived at the cinema5D office, as you may have seen in Nino’s Osmo review. But the focus of our attention is the DJI Zenmuse X5R Camera, which can be attached to the DJI Osmo with the Osmo X5 Adapter and produce powerful cinematic RAW footage in 4K with Osmo stabilization in an ultra-compact form factor.

We were very curious to find out what the camera quality was really like. Here are our lab test results when compared to professional cinema cameras. 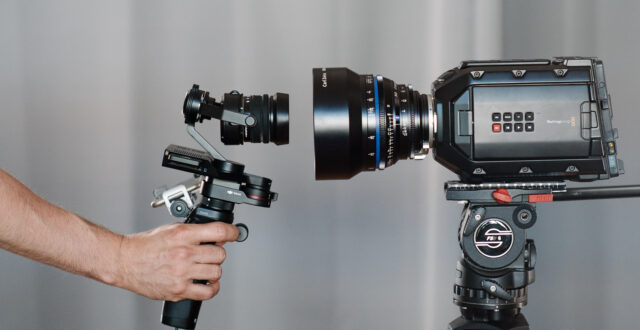 The DJI Osmo RAW version is quite a bold little camera. Very small, light and with a promise of 4K RAW that can also take to the skies when attached to the DJI inspire 1. The integrated stabilizer makes this an extremely convenient tool, and the fact that there’s a potential for high quality footage with its RAW recording makes it compete with much more professional and expensive cameras. We’ve tested the ergonomics of the device, now let’s see how the little Osmo RAW compares in terms of image quality.

Dynamic range is difficult to measure properly, especially on a RAW camera where processing is done by the user and not by the camera. We’ve gone through DaVinci resolve to create a flat image of our recording and measured it with our software.

A good dynamic range rating allows us to capture more shadows and highlights in high-contrast scenes. The X3 camera on the original DJI Osmo suffers from a very poor dynamic range, which is especially problematic when capturing landscapes with the DJI inspire 1 drone.

We’re testing usable dynamic range with a DSC labs XYLA-21 transmissive test chart. Unfortunately, our test lens, the Zeiss 50mm Cp2 macro, is not compatible with the Osmo, so we used the 15mm F/1.7 MFT lens that came with the Osmo X5R.

Our software measured about 12 stops of usable dynamic range on the DJI Osmo RAW (Zenmuse X5R camera). This is similar to the rating of the Sony a7S II, 3 stops more than the Blackmagic URSA Mini 4K and 2 stops less than the Arri ALEXA. 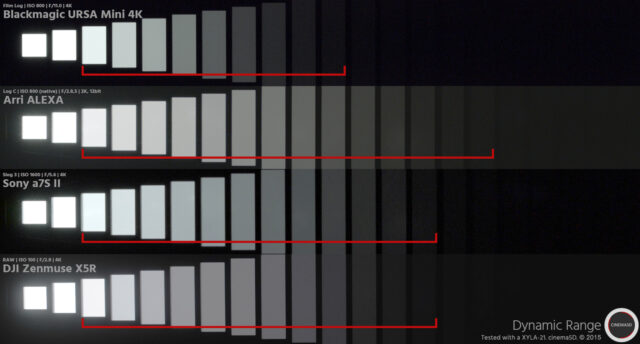 DJI advertises the dynamic range of the Zenmuse X5R camera at 12.8 stops. It is rare that manufacturers are upfront when it comes to usable dynamic range.

Note that a RAW camera doesn’t necessarily produce more dynamic range. Doing numerous comparisons with test charts, we have learned this over time. It is likely that the original Zenmuse X5 gives you more or less the same dynamic range. RAW on the other hand gives you finer gradations, more possibilities in post and an image that is more solid and can be graded further without destroying the image quality. When we pull up that information in the blacks there is noise, but a lot more steps are visible behind it, just like on the Blackmagic URSA Mini 4K that displays a lot of noise early on. 12 stops of usable dynamic range is a good rating for a cinema camera. It is also what the C300 mark II achieved. As always, the Arri ALEXA stays untouched with 14 stops of usable range.

The  Blackmagic Micro Studio Camera 4K is also small and shoots RAW, but is not an alternative as this one was limited to about 5-6 stops of dynamic range in our tests.

We determine image quality by looking at sharpness (resolution) and aliasing with the help of stars and tubes. Usually they reveal where an image breaks down in terms of resolution.

The shots below were taken at the best ISO speed of each respective camera. 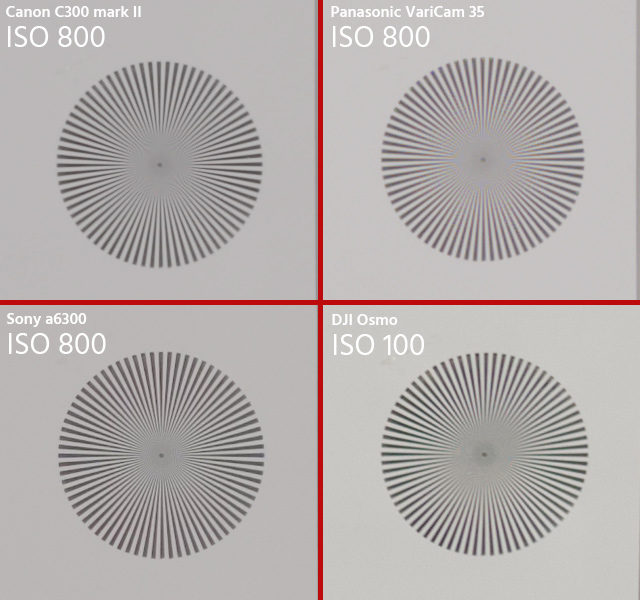 As you can see, despite any lens cushioning and lens softness, the DJI Osmo RAW is quite close to the Canon C300 mark II and more or less on par with the Varicam 35 / LT. The Sony a6300 is the only camera that leaves the others behind in terms of resolution. Who would have thought.

Looking at the a6300, it has become clear that size is not the deciding factor when it comes to quality resolution. The Osmo DJI RAW proves that yet again, with an impressive image quality that comes close to the bigger cinema cameras. Here are a few more comparison shots of other objects on the test chart:

In summary, I would say that in terms of image quality the DJI Osmo RAW can hold up remarkably well in comparison to professional cinema cameras currently on the market. 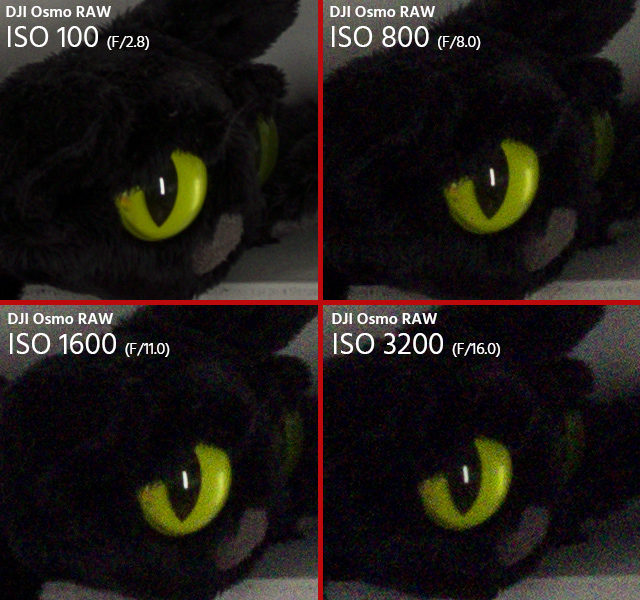 The DJI Osmo RAW X5R camera shines at ISO 100, but it quickly loses its power when you crank up the ISO. For the shots above I used minimal post processing. You can see that at ISO 800 there is already a considerable amount of noise in comparison to ISO 100. That said, look at the shot of the cat earlier on where the blacks were pulled a little and some noise reduction was applied. This has to be kept in mind when shooting RAW. You can still treat the image much better than from cameras that use heavy compression.

It’s clear that the Zenmuse X5R is not a lowlight wonder and the DJI Osmo RAW should be used at low ISO speeds. I would recommend not to go beyond 800 for high quality shots. Ideally you should stay low, because the Osmo RAW records at ISO 100 at all times. Any other ISO speeds you set in the app are just a “preview” and have to be processed (pushed) in post production.

The famous rolling shutter effect that haunts CMOS sensors can be especially troubling on shots where a lot of movement is involved. The Zenmuse X5R that rides the DJI Osmo RAW and flies on the DJI inspire 1 is certainly meant to be involved in a lot of moving shots.

Unfortunately, the Zenmuse X5R doesn’t shine here. With 25ms of readout time it is at the worse side of the spectrum, and most proper cinema cameras have much lower rolling shutter ratings. 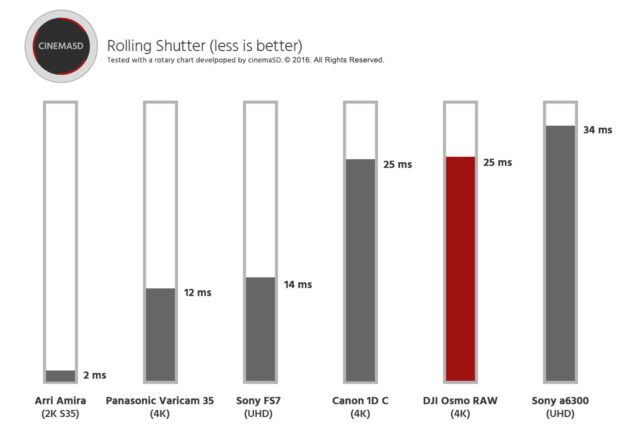 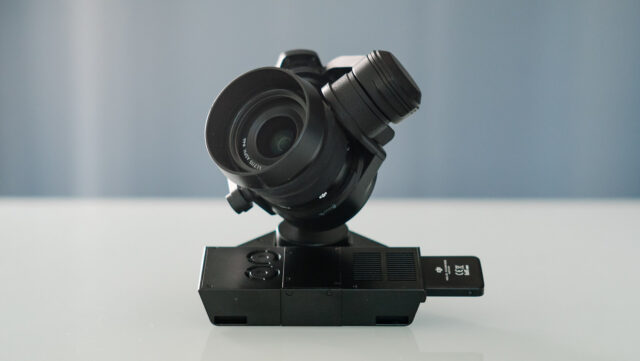 Look at that tiny 4K camera and stabilizer. The DJI Osmo RAW certainly has a niche of its own. A small, stabilized camera that delivers 4K RAW images at 24p. There’s nothing like it right now that delivers RAW, is so easy to use and can be mounted onto an affordable and powerful drone. The question is whether or not the RAW can keep up with cinema standards and truly deliver high quality footage.

It is quite difficult to draw a definitive conclusion from what I’ve seen. On the one hand, the footage we get is really powerful, has beautiful deep gradations, a high resolution, organic look and can really be played with in post production. If you’re used to Inspire 1 drone footage, this upgrade will simply blow you away and the difference to a professional cinema camera like a VariCam, Alexa or C300 mark II will be hard to spot when properly post processed. Of course the Zenmuse X5R wouldn’t simply replace a cinema camera, as such a camera is about more than the final end result of a picture you can achieve. An Arri ALEXA is certainly still in a different class altogether, but I think the Osmo RAW will become relevant in the cinema sector for certain applications.

There are also a few shortcomings you should consider. In terms of a “true cinema camera”, rolling shutter is absolutely terrible. The Canon 1D C from Canon’s cinema line rightfully has a place in the same ranks here. But especially because the DJI Osmo RAW is used in situations with a lot of motion, the strong rolling shutter can be a problem that might put many professionals off. Another downside is the mediocre lowlight performance. If you’re coming from DSLR’s this will be limiting, but if you’re used to Blackmagic or film cameras you probably won’t notice it.

All in all, the DJI Osmo RAW is a remarkable piece of gear. In the right hands, when the RAW is exploited with some time in post production, this can be an extremely powerful tool. The fact that this is not just a camera, but a solution as a miniature gimbal camera for on the go or in the air is intriguing. Is the price of $4000 a lot? Yes. Is it worth it? You decide. Let us know your thoughts in the comments.