It seems everyone is getting into the 360 game these days and Panasonic has unveiled an impressive new quad 4K 360 prototype camera at Inter BEE 2016 aimed at streaming sports and live events. Find out more below:

There are two large gaps in 360 degree technology right now in my opinion: 1)  resolution below 4K is just too blurry and 2) live streaming content is hard to find and delay issues still abound when it works at all. Panasonic is working hard to solve both of those gaps with their 360 camera prototype.

Four wired cameras mounted on a tripod are attached to a separate “brain” unit in this rig to stitch together a 4K image viewable in 360 with a VR headset. The fact that the system allows for onboard live stitching and then streaming means a VR live Super Bowl broadcast is getting closer and closer to being a reality.

The stitching process occurs with an image delay of only 0.3 seconds — which still doesn’t feel quite delay-free when comparing the image on the iPad with what your eyes see, but it is pretty darn fast. In my opinion, it is a smart move for Panasonic to target the live events and sports markets with this 360 camera should it one day reach market. I see VR tech pushing forward more rapidly at the 50-yard line than in the traditional hollywood studio system. 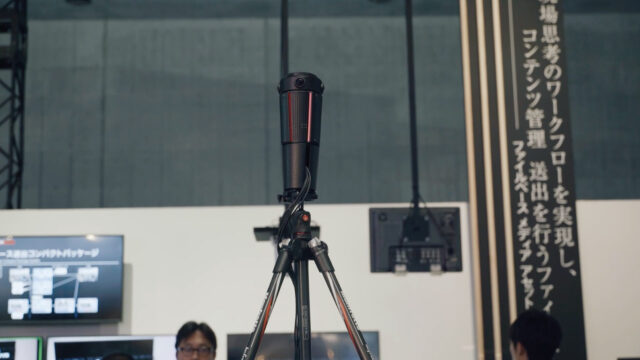 For obvious reasons, sports don’t have a long shelf life when it comes to viewing after the airdate, so live streaming will be essential if 360 / VR applications are to take off in the athletics realm. The good news is that broadcasters and leagues have the deep pockets necessary to put 360 cameras on the field once the technology catches up.

The clear leader in the VR sports live streaming space is NextVR, having streamed the opening night game of the NBA in 2015 in partnership with Turner Sports. Companies like NextVR are all developing proprietary technology for both live stitching/streaming and even image capturing in some cases and competition remains fierce.

In the end, whether 360 lives are dies will come down to if the audience is there and if production companies and broadcasters can make money off of the technology. Having been a part of the overhyped 3D mini resurgence in 2010 I am wary, but hopeful.

No word yet on when or even if the Panasonic 360 prototype camera will come to store shelves and at what price point, but the very fact Panasonic is working on this technology is a sign that camera manufacturers at least are embracing a VR filled future.