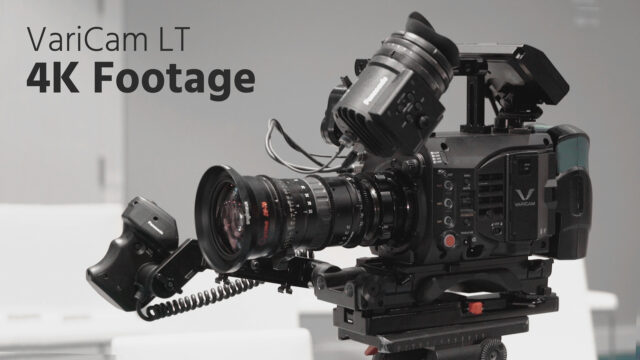 Earlier today the new Panasonic VariCam LT was introduced to the world. A single-operator cinema camera that brings the quality of Panasonic’s high-end Varicam 35 (introduced last year) into a more compact and affordable package. At the release event, we had a chance to take a closer look at the new camera and share some exclusive footage from German cinematographer Matthias Bolliger, shot right here at the event. 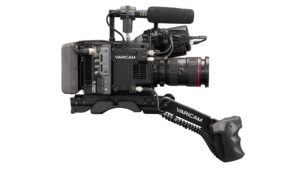 If you want to know exactly what the new Panasonic VariCam LT brings to the table regarding specs, then you should check out this article where I described the technical details.

We had a chance to get our hands on the VariCam LT and see how the camera feels on the shoulder. As each shooter has different preferences in terms of a rig ergonomics, it’s hard to generalize whether a camera offers a design that works for everyone and you should always try a camera yourself. During the brief time I had with the Panasonic VariCam LT, it was easy to see that they have thought about a lot of the small things that a single-operator shooter would be concerned with.

For example, the comfortable shoulder plate can be moved forwards and backward to balance the camera correctly, which is not possible on the FS7. The menu can be moved to the viewfinder, much like on the Arri AMIRA and there are dedicated menu controls on the left-hand side which can be easily accessed blindly. Unlike other “ergonomic” cameras, it seems like after a small learning curve the LT could become a tool that lets you be fast. That said, it looked like the camera booted just as slowly as the Varicam 35 which makes you wait 40 seconds until it’s ready to shoot.

The camera was well balanced, and everything felt right, except maybe the EVF mount that couldn’t be positioned correctly for me as it didn’t extend far enough to the left. 3rd party EVF’s can be used, as well as Panasonic’s OLED EVF that they had on the camera.

Looking at the footage by cinematographer Matthias Bolliger which he kindly shared with us (the video above—watch it in 4K through Vimeo!) I got the impression that the quality is very similar if not identical to what you would get from the more expensive Varicam 35. Panasonic’s press material also suggests that the sensor and processing are mostly identical and that the main difference between the two cameras lies in the processing power and format options.

If you look at the test shots, you can see the beautiful highlight roll off. It is very soft and organic and just like on the Varicam 35 it seems the color reproduction, quality, and dynamic range are preserved up and down the ISO range, which is critical when consistency and professional end results are required—an aspect that is rarely seen on cinema cameras these days.

The camera can switch from native ISO 800 to native ISO 5000. It seems as though low-light shots give you a very nice image quality, and while there is some omnipresent noise, the noise difference between 800 and 5000 is minimal according to Bolliger. This makes it an interesting camera for him, that can be used for normal shooting scenarios as well as low-light situations often encountered in documentary productions.

The camera also shoots slow motion at up to 240 frames per second in 2K which is a very nice add-on that, for example, the similarly priced Canon C300 Mark II doesn’t offer. In comparison to the Varicam 35 however, the LT achieves 240fps with a 2K center-crop and with a lower bitrate “LT” codec.

Many thanks again to cinematographer Matthias Bolliger for sharing his first shots not only with the press at the release of the VariCam LT but also our audience at cinema5D.

Make sure to check out Matthias Bolliger’s website at matthias-bolliger.de

More info about the VariCam LT in this article and at panasonic.co.uk