Back in 2016 Miggo, an Israeli company, introduced the Pictar One. A hardware device for controlling and enhancing the iPhone’s photo and video abilities. Now, a little over two years after their first campaign, Miggo are back on Kickstarter with a new and improved version of their neat device: The Pictar Pro. 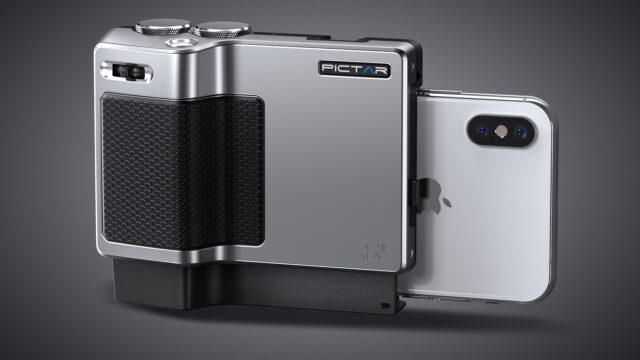 This new version sports a metal body, improved (and larger) controls, a built-in battery for wirelessly charging the phone (if the phone supports it), and, most importantly, advanced video capabilities over the original Pictar One. It works with all recent iPhones (from 6 to Xs including plus and max models) and a number of leading Android models.

This device turns your phone’s camera into a fully-fledged pro camera with all the hardware buttons and dials you would expect on a DSLR camera. Four external controls, several mounting points for accessories and the ergonomic shape of the unit itself let you operate your phone’s camera like the real thing. The magic ingredient, however, is the app that connects seamlessly with Pictar Pro. Combined, these two parts unleash the full potential of that tiny lens on the back of your phone. 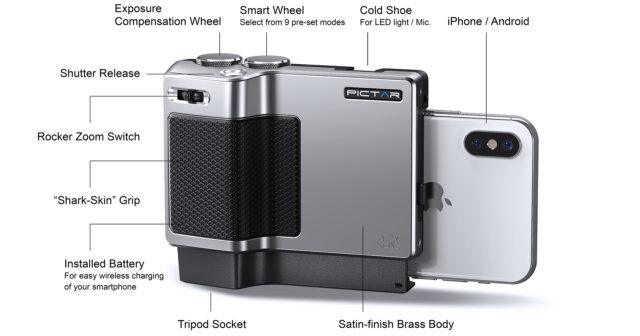 The Pictar Pro only comes in one version that fits all compatible smartphones. You don’t have to choose between the original and the plus model for larger phones anymore. Once you insert the phone into the Pictar Pro camera grip you’re all set. You don’t have to wait for a Bluetooth connection whatsoever because there’s no Bluetooth involved here.

The device emits a short, very high-frequency audio signal, one for each control element. These sounds can’t be heard by humans but your phone’s mic will pick it up and sends it off to the Pictar app. Inside the app these tones are being translated into control commands for the actual camera. That way battery life is increased and the frustration of wacky Bluetooth connections is decreased. 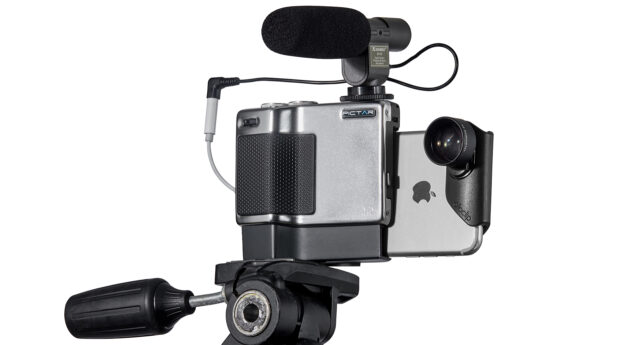 This new model sports a number of new features targeted at video shooters. A 1/4 20 tread is located at the bottom of the unit, a cold shoe mount on the top. Furthermore, you can open up a tiny flap on the side of the Pictar Pro in order to connect an external microphone directly to your phone.

A really cool feature is the ability to use a dedicated viewfinder rather than the bare screen of the attached phone. Once the little (and foldable) viewfinder is attached to the Pictar Pro the app will shrink the screen to just a tiny portion of the actual display to fit the viewfinders field of view. This is cool when shooting in bright sunlight! 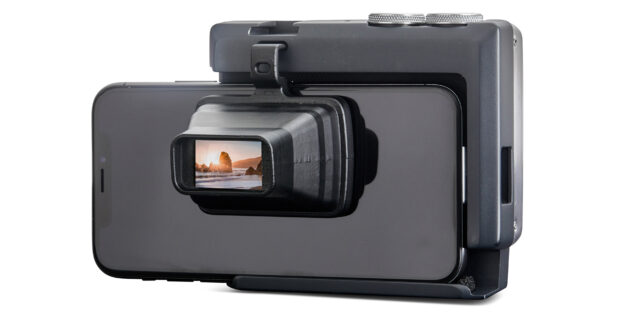 The new zoom rocker can be used to smoothly zoom in and out while in video mode. The original Pictar One used a dial instead of a rocker which resulted in not so smooth zooms. The zoom speed can be adjusted, of course. The new app, in conjunction with the Pictar Pro, now even features video stabilization and you now can control the frame rate of your videos 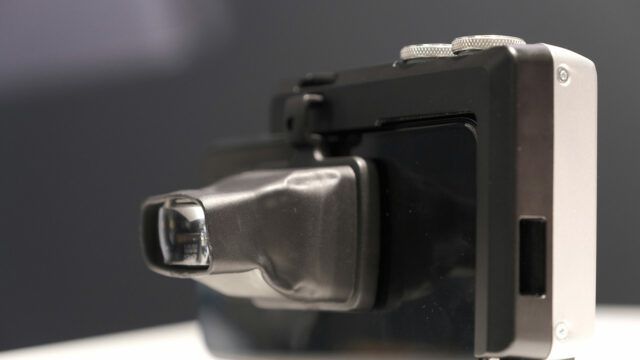 In order to use the Pictar Pro you need the dedicated Pictar app (available for iOS and Android). This is the brain and master of the hardware attached. In conjunction with the hardware controls you really get a serious camera. Pressing the shutter button only halfway through to lock exposure/focus and reframing your shot afterwards? Not a problem (and you can’t do that on your phone). Snapping photos in RAW or TIFF format? Sure!

In terms of video, the app lets you pull off things you simply can’t do with the native camera app of your phone. Such as controlling the zoom speed, displaying a histogram, increasing the shutter speed, controlling ISO, manipulating the frame rate or using manual focus rather than wacky auto focus.

Furthermore, since the phone’s camera section is unobstructed by the Pictar Pro you are free to use whatever clip-on lenses you like.

This list will be updated regularly so if you don’t find your phone on it, check the Kickstarter campaign page for updates! Hint: The new iPhone Xs, Xs max and Xr are supported, too.

Pictar Pro is available through Kickstarter, which means you can’t buy it but have to financially support their campaign and then get a Pictar Pro as a reward once it’s successful. Said campaign runs for almost 2 months from now. Pricing is $119 (early bird) or $129 (regular Kickstarter price) for the Pictar Pro only. Several kits are available, too. Shipping should start around March 2019.

Please keep in mind that Kickstarter is not an online shot but a crowdfunding platform. Anything can happen including the total loss of your “investment”. Since the original Pictar One campaign was a huge success, though, I think it’s safe to say that the guys behind it have a solid reputation of delivering a quality product in time. 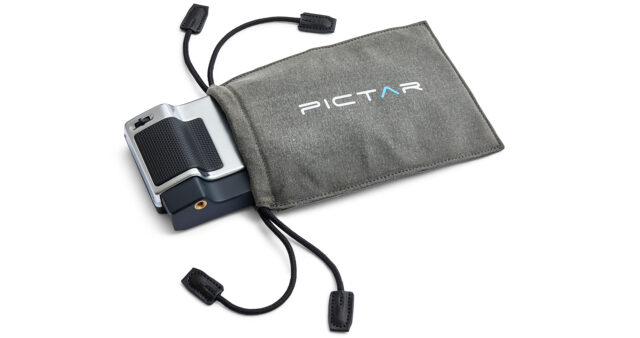 What do you think about the Pictar Pro camera grip? Share your thoughts in the comments below!