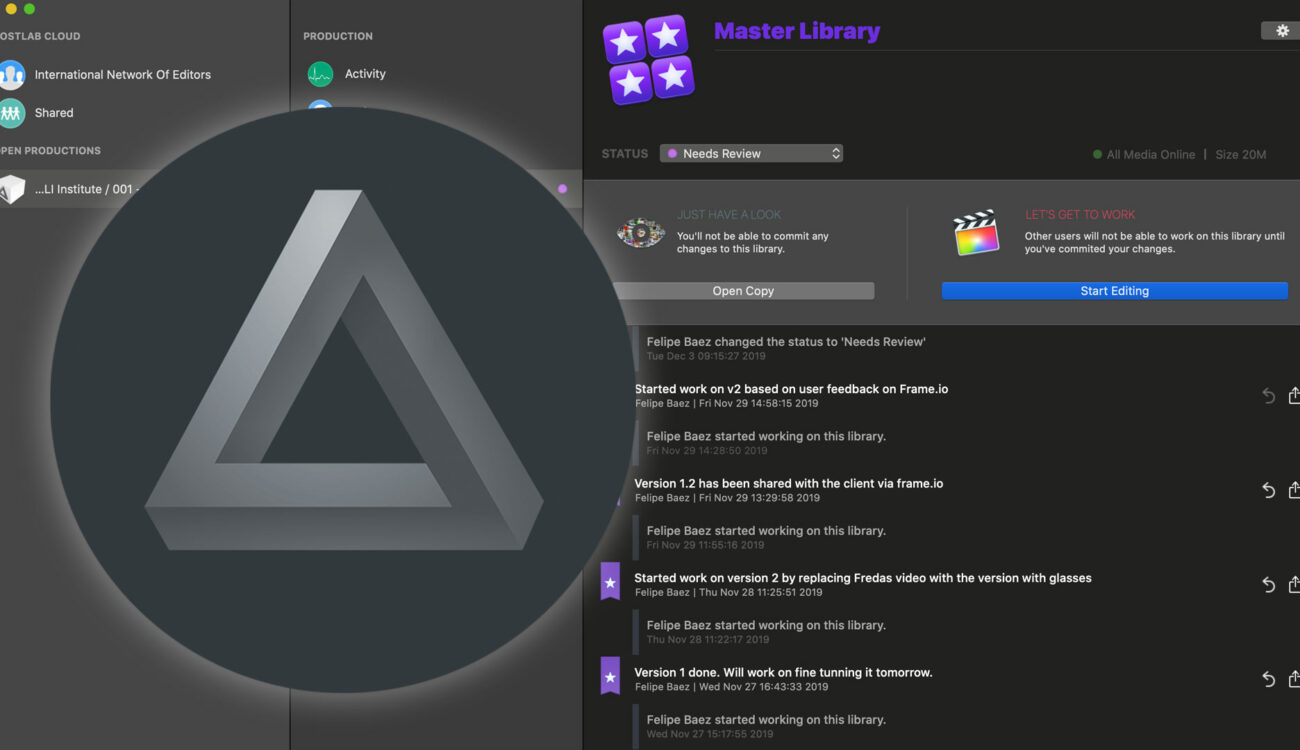 Postlab is a simple collaboration tool that keeps editors in sync across multiple machines. It is re-launching today under new ownership, with big plans for the future. So let’s see what’s going on under the hood and what’s on the roadmap!

PostLab was developed as an open-source project by a Dutch broadcasting company, and stood as a simple yet robust toolkit for those with the technical know-how to set up and run their own servers. They were acquired by Hedge in early 2019, who began developing a version more accessible to users without an IT team or background. When we reported on the acquisition in April, the new cloud-based service was coming out of beta and available to a limited number of users. Now, PostLab has fully re-emerged as a subscription-model app that runs alongside Final Cut Pro.

If you, like me, hear “collaboration plugin” and jump to Frame.io comparisons, you are not alone. This is a very different product with a very different goal. Frame.io is designed to streamline the review processes of rendered video, while PostLab keeps everyone in sync along the way.

At its most basic level, PostLab lets you share a FCPX Library. It holds the master project in the cloud, and collects all the changes users make on their local copies. When you begin editing, it locks the Library until you are finished. Once you have made your edit, it automatically updates the master and then distributes that update to everyone else. When you finish an editing session, you are required to quickly describe the changes you made. This prevents confusion over versions (wait, were you working on Rough_Draft_v1 or v2? Did we fix the title sequence yet?). It also provides a tailored solution more stable than a generic server or cloud storage solution.

PostLab is organized into “Projects,” each of which can contain multiple libraries, scripts, stills, and any other supporting files. The owner of these projects is then able to administer access rights, share it with others, and run a chat discussion about the project as well. (Not to be confused with the “Projects” FCPX itself creates, which are essentially just timelines – confusing naming from Apple since Final Cut Pro X launched.)

You can technically work offline, but that’s just a workaround, in case the worst happens. You’d end up manually uploading your changes as a new library to PostLab, then merging the two once you’re online. For maximum smoothness, you need to be connected to the internet while using Final Cut Pro X with PostLab. That said, there have been rumblings of an “on-premise version” that doesn’t require a connection coming in 2020.

Because of the way PostLab syncs the local copies of the Libraries and Projects, you will always have the most up-to-date version saved locally, no strings attached. If, in the middle of a project, you get fed up with the service, if their server crashes, if you migrate to Avid or Premiere, you will still have everything you need. 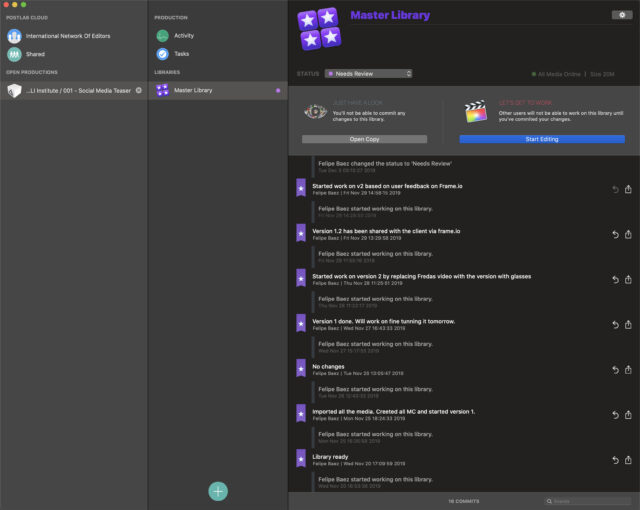 While PostLab was an excellent open-source project, it was also limited in scope. Without stable funding and a dedicated team, it could only grow so much. Under Hedge, the foundational code has been rebuilt from the ground up in a generic way that clears the road for future development on other NLEs.

As a primarily Premiere-based editor, I haven’t personally had a chance to use PostLab. I am very interested by the promise of it though, and look forward to the day when I can add it to my toolkit. I have many tiny frustrations with the ways that collaborative editing can go wrong or bug out. I’ve resorted to sharing proxies and active project files through a Google Drive folder before – in a professional setting no less! – because we didn’t have a solution like PostLab. You better believe that caused some bugs. The version control and automated updating of Projects is, to my eye, the killer feature. I’m excited to see continued development under Hedge’s leadership.

If this sounds like the app for you, jump on it now. Hedge is offering a 30% discount until the end of the year on their website.

What is your post-production workflow? What new features do you want to see from PostLab? Let us know in the comments!