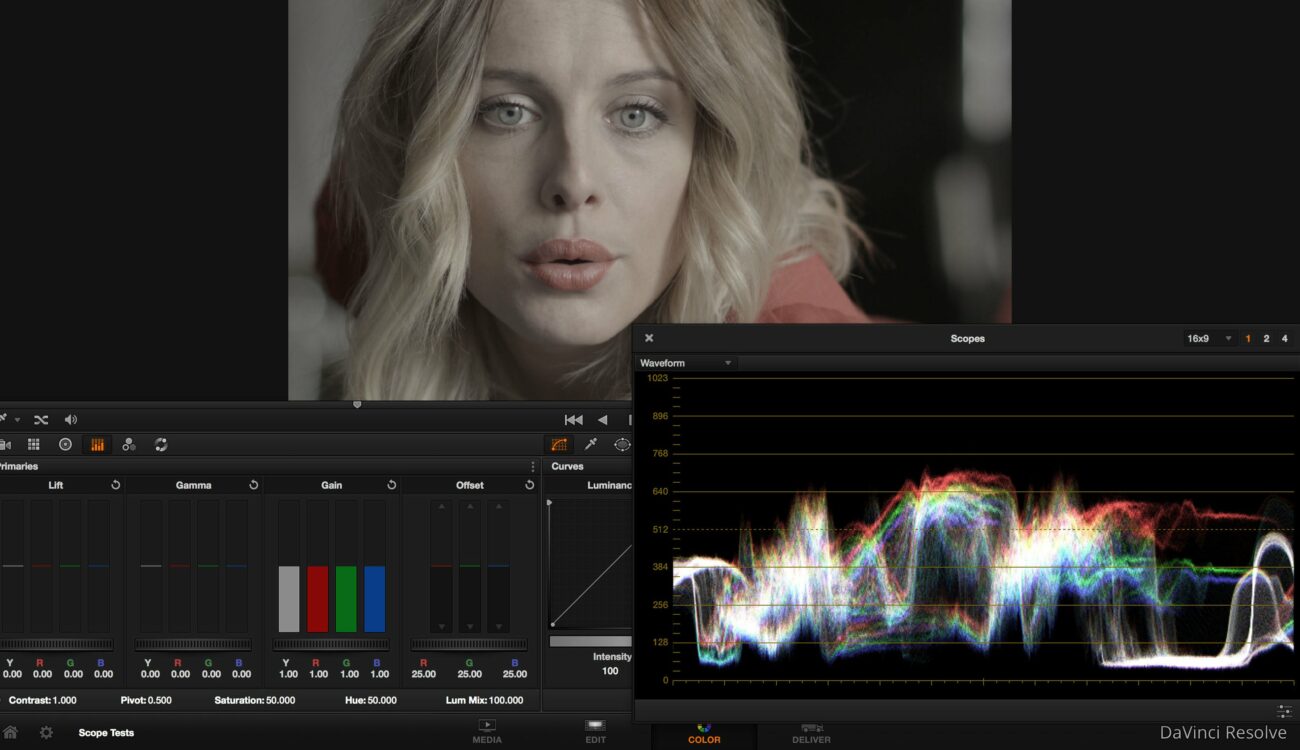 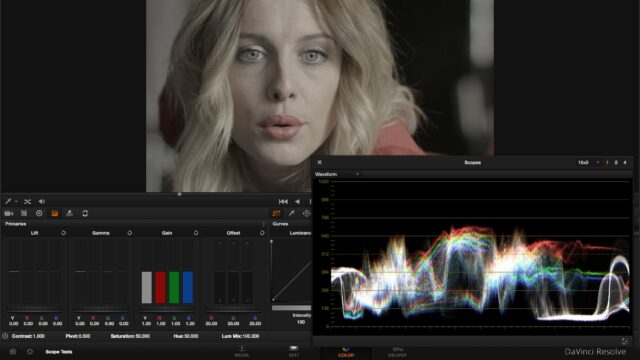 The colour correction and grading process is a strange but exciting combination of technical adjustments and artistic expression. These two require a switch in mindset and in toolset when moving from one to the other. Learning how to use your scopes will make everything easier.

Without correcting technical issues, balancing and shot matching first, you will be totally lost creatively when it comes to achieving your desired look consistently across sequences that should flow seamlessly.

The goal of correcting exposure and balancing luma, hue and saturation shot by shot is to make sure that every common element in each shot, under the same conditions is at the same brightness, hue and saturation. Of course the most important is often skin tones, but it’s also important to look at other elements as well.

It all needs to match in every shot in a sequence, and even overall levels from sequence to sequence, tonal ranges and luminance ranges should fit into a coherent balance.

Remember however, these elements need to match when under the same conditions!

Think lighting here. An object that passes from shadow to sunlight is clearly going to have a different luminance, and it should! You’re never going to try and “correct” that out. However, then the goal is to make sure whenever that object is in shade, it looks the same, and whenever it is in sunlight, it also then looks the same.

Luckily, this initial technical correction pass is the most measured and objective, and can be made very easy by tackling one aspect at a time, looking at the elements in your image and learning to use the various scopes properly.

I always tackle exposure correction and luma matching first, and it’s safe to totally ignore colour when adjusting overall luminance levels in your image. Sometimes I’ll even totally desaturate everything in order to clearly match luminance shot by shot, sequence by sequence without distraction.

Most often with exposure correction, and matching overall luminance levels, it’s a case of pinning down just three common points in your image and everything else will fall into place.

These three points are your darkest blacks, your brightest highlights, and something you know should be in the middle. Often this can be skin tones if you have them, but it could easily be anything in the shot that should be close to middle grey (when desaturated).

Not every shot contains a bright highlight, but most will at least contain something that is black.

You can easily refer to the Ansel Adams Zone System to pin those three points where they should be. I’ve introduced the Zone System in a previous article, but it’s here below for immediate reference here. 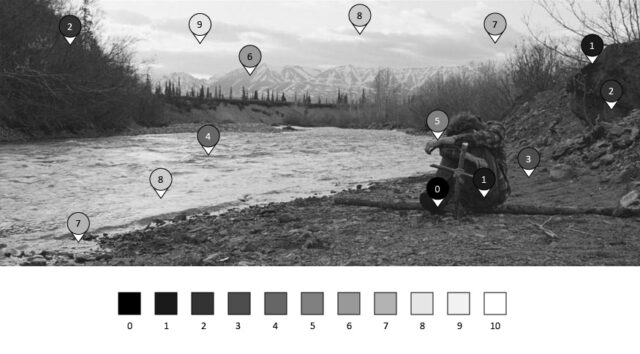 The easiest way to objectively check and manipulate luminance levels in your image is the waveform scope.

In DaVinci Resolve, the waveform scope sets up the full range of luma information in your image from left to right of the frame against a 0 – 1023 vertical scale. Zero is black and 1023 is white.

You can clearly see above that when you push up the luma level in your lift, your blacks get lighter. The waveform scope shows you that you’ve shifted “black” from 0 up to 128.

In the same way, if you decrease luma in your gain, your whites get darker.

Finally, changing the gamma luma value affects the mids. Above shows decreased luma in the mids and how it affects the waveform.

It’s easy to immediately see where the darkest parts of the image are sitting as well as the highlights, and where all your mids are in between by referring to the scale on the waveform scope.

With practice you end up being able to see the whole image just in the scope, and you will be able to quickly recognise where the elements in your image are in terms of luminance, and later RGB values.

One easy trick to isolate a certain part of the image in the scopes is to use a circular window to highlight just the element you want to check. This is useful when making sure that element is in the same luma range across multiple shots.

By temporarily desaturating the image and turning on the highlight, you can see clearly what luma value only the skin tones are at, this is incredibly useful for matching certain elements that need to look the same across multiple shots. 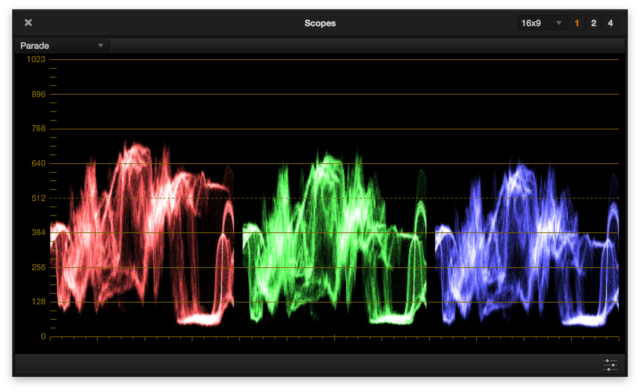 The RGB Parade scope is similar to the Waveform only it splits the image into Red Green and Blue separately.

It is useful in seeing the overall RGB balance in your image, for instance, if there is an obvious offset in one particular channel, and in making sure objects and elements in the shot that should be black, or white are true black or true white. Something that is true black, white (or grey for that matter) will have equal values across all channels.

Above you can see that true black through white will have equal RGB values in the RGB Parade scope.

If we purposely push only red into the shadows, and bit of green in the mids you’ll see the RGB Parade scope show the values start to separate out for each channel and are no longer equal. This example is artificially created but with a real world image, we can tell our blacks are not black just by looking at the RGB Parade scope.

A badly calibrated (or non calibrated) monitor can lie, but the scopes never lie regardless of monitoring. If the scopes are showing equal RGB levels for an object close to zero, you can be sure it is true black, if the values are equal and higher in luminance, you can be sure it is true grey, or white (depending on value) with no unbalanced tint to any particular hue.

Once you’ve matched and locked in exposure and luminance across every shot in a sequence and made sure your blacks, greys and whites are clean, you’re in a pretty good place to tackle hue and saturation. You can safely ignore luminance, because you’ve nailed that, and just look at hue and saturation.

Just as Waveform and RGB Parade don’t lie regardless of your monitor, neither does the Vectorscope. This is the greatest thing about these scopes, they are 100% reliable, trustworthy, accurate and objective even if your monitor is not.

The Vectorscope shows you hue and saturation. You’ll see the different points marked for the legal broadcast levels of Red, Green, Blue, Yellow, Magenta and Cyan.

If you load up a standard set of colour bars, you’ll see just how this looks on the Vectorscope. The trace shows exactly what the hue is and how saturated it is.

Black, white and any shade of grey register zero hue, and remain centred exactly on the scope. If the image is totally desaturated, there is no information to show.

The Vectorscope above shows the hue and saturation information for the entire frame.

By using the circular window trick to isolate a certain element in a shot, in this case the skin tones again, you can see only its exact hue and saturation level. This makes matching it from one shot to the next almost as easy as painting by numbers.

Remember this is all part of primary correction. We aren’t isolating anything yet. When you manipulate the hue for lift, gamma or gain, (shadows, mid-tones or highlights) you are affecting the entire image, not just an isolated selection. It’s easy to muddy your blacks, or whites, so it’s important to also pay attention the RGB Parade scope.

Just as pinning three points for luma corrections often balances everything else out, often correcting or shifting hue slightly as needed in the mid-tones or maybe highlights to match prominent tones (skin tones for instance in the mids) will achieve the overall balance you’re looking for. Rarely do I push around the shadows if the RGB Parade scope is showing my blacks are balanced and correct.

Anything that is needed outside of this overall balance, such as a correction only to isolated hues within certain luminance levels needs to be done with some form of isolation as a separate pass.

When making isolated corrections, the window trick with the Vectorscope still works a treat to make sure that element looks exactly the same under the same conditions shot by shot.

I hope that this has given you an idea of just how important the scopes are to getting your images balanced correctly, and when they are used one step at a time, first looking only at luma, and then at hue and saturation, it’s not at all difficult to match shots even if they look quite different right out of the camera.

For another look at the same principles with some great examples and additional details please take a look at this article on W(a/o)ndering Filmmaking – http://waondering.com/2015/05/18/continuity-of-colors-matching-exposure-and-color-balance/

Also worth reading: A Guide To Using Waveform Monitors As Artistic Tools in Color Grading by Tektronix, it will ask you to register some details in order to download the pdf.