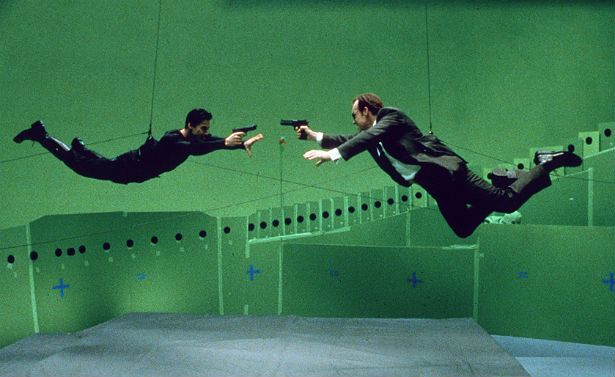 You certainly remember 1999’s iconic feature film “The Matrix” which has certainly had a profound impact on a lot of science fiction films in the decade that followed and on me personally. Apart from its content it established a number of styles that were unknown in filmmaking before, among them what became known as the “Bullet Time effect”. From “The Matrix”, courtesy of Warner Bros.

Bullet Time describes something that is seemingly frozen in time, like a still frame, but the camera is dollying/flying around it at the same time. Basically an impossible shot to shoot with one camera, that’s why they used MANY cameras and triggered them at the same time. A computer interpolated the in-between-frames. In 1999, that was a big deal, in 2013, you can do it yourself with countless of VFX tutorials for it online, here’s one.

The downside: you STILL need many cameras. That’s where it becomes tricky for most people.

Not so for NASA engineer Mark Rober – he built a DIY bullet time rig with ONE GoPro camera. Of course it’s not as perfect as the big Hollywood solutions, nor as versatile, but it is indeed big fun: he uses a ceiling fan motor to rotate the camera extremely fast around a static platform, with a neutrally lit background. The effect: it looks like the object (and whatever you do with it) is spinning super fast. Add the GoPro Hero 3‘s slow motion ability of up to 120fps in 720p, and I am sure you can get even more impressive results.

Now, why has nobody built this with a DSLR yet??