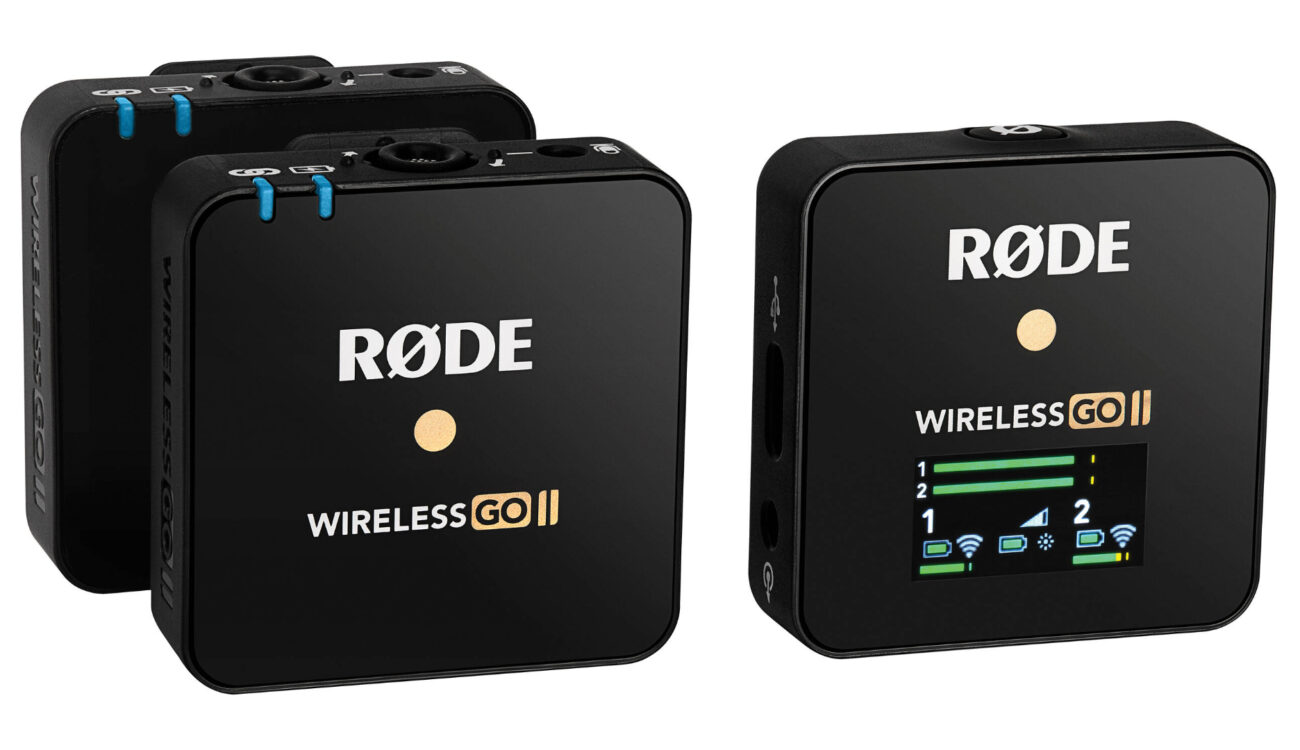 by Olaf von Voss10 days ago

Australian audio specialist RØDE has just announced a successor to its ever-popular Wireless GO system. The new RØDE Wireless GO II honors its name, since the receiver now communicates not only with one, but with two individual transmitters.

Back in 2019, the original Wireless GO system was a huge success, as it was one of the most affordable, easy-to-use, plug’n’play 2.4GHz digital wireless audio systems out there at the time.

YouTubers and other professionals jumped on the RØDE bandwagon, but one thing remained a desire: connecting two audio sources to the receiver instead of just one. With the new Wireless GO II, you can do just that: Feed two individual (mono) sources or a combined stereo signal into just one transmitter.

To be clear right from the start: The RØDE Wireless GO II system is a completely new product. Although they look very similar, unfortunately you can not upgrade the original.

The above video gives you a nice overview of all the new features.

On first look, not much has changed: The form factor is the same, the units are still very compact and lightweight (receiver: 32g / transmitter: 31g), the transmitter still features an onboard omnidirectional mic – no external lav mics needed for minimal clutter. Both, transmitter and receiver still come with internal batterie which can be charged via USB-C.

So what’s new then? Well, here’s a list to get you started:

This is probably the most remarkable (and most requested) improvement. The Wireless GO II system now consists of two transmitters and one receiver. You can either record two individual audio channels with only one (two-channel) receiver, or combine both incoming channels into one stereo channel for recording on downstream cameras/recorders.

Each transmitter can also record its own audio channel internally, very handy for fail-safe recordings or as a backup when you are working in RF-heavy environments.

Furthermore, the 2.4GHz digital tranmission has been updated to “Series IV” performance, resulting in an extended range of up to 200m (line of sight). This is good news, as with digital transmission you don’t just get a slightly distorted signal once the connection is disturbed, but no signal at all. The magic of ones and zeros…

The transmission is secured via 128-bit encryption. Both transmitters come pre-linked to the receiver out of the box, so you should be up and running in just a few minutes.

All these features are not exactly revolutionary, but rather evolutionary, which I think is a good thing. All the quirks of the original version have been fixed with the RØDE Wireless GO II system. As the company puts it:

The Wireless GO II is a huge leap forward in terms of useability and versatility, while retaining all the elements that made the first edition such a success. It represents RØDE’s mission to innovate and continue evolving our product lines, always with creators in mind. The Wireless GO II is once again going to change the way people record audio for their content.

A 3.5mm jack output on the receiver can be connected to a downstream camera (a flat cable is included), but you can also connect a PC, Android phone, or iOS device via a USB-C port. No intermediate devices are needed, just simple plug’n’play audio recording.

As a nice touch you can record a second “safety” channel at -20dB, just in case audio levels get too hot while recording (compressed: upt to 24hrs, uncompressed: up to 7hrs, no SD card needed). Very handy. Speaking of controlling input levels: A three-stage pad in in place which can be extended to a whooping 10 stages.

The built-in lithium-ion battery should be good for around 7 hours and the also offer a power saver mode.

This new app gives you complete control over your RØDE-branded devices. Not only the new Wireless GO II but also other gear such as the VideoMic NTG or the AI-1. The app is needed to enable features like on-board recording for the Wireless GO II transmitters or the extended 10-stage pad.

The new RØDE Wireless GO II system is available now. It sells for $299, which is quite a bit more expensive than the original Wireless GO but you get one extra transmitter so I think this a pretty fair price for what you get. A bag, all necessary cables and a set of furry windshilds (with a new and improved locking mechanism) are included. External lav mics are of course optional.

What do you think? Do you have a set of Wireless GO already? Do you think this is worth the upgrade? Share your experiences in the comments below!