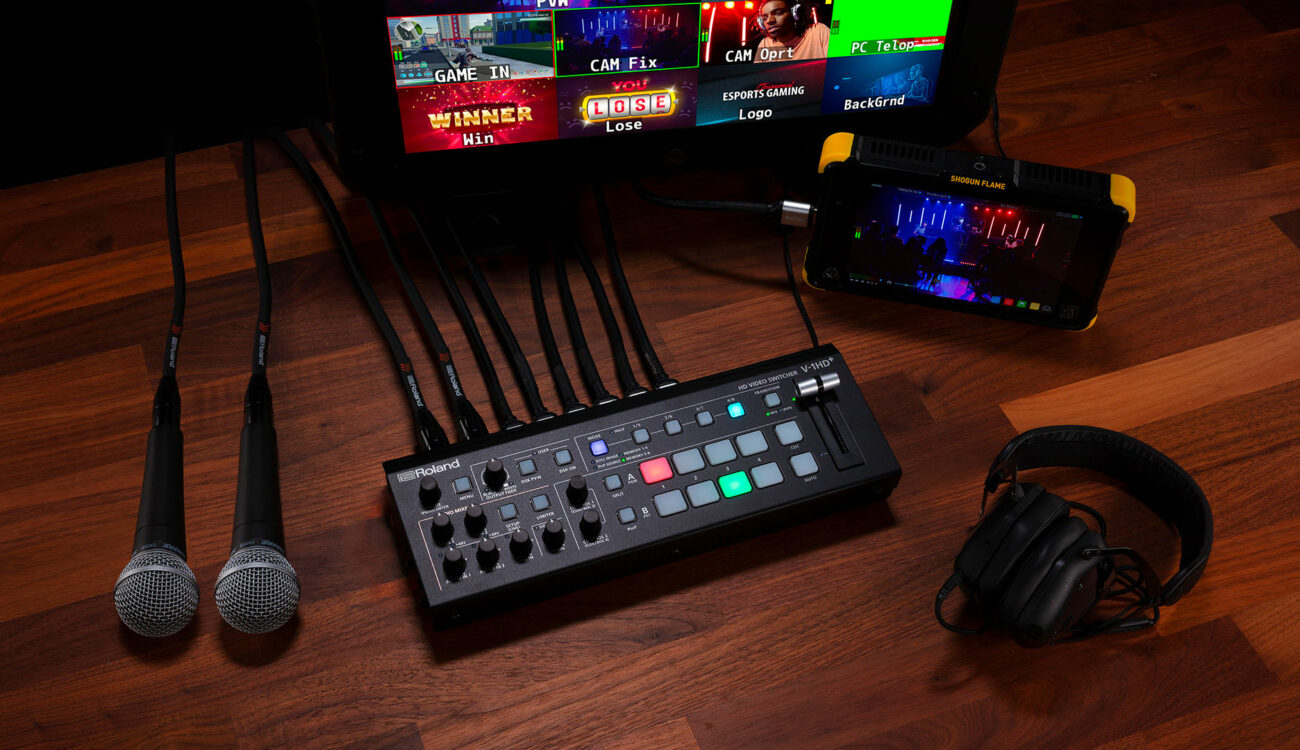 Roland recently released a new video switcher with live streaming capabilities: the Roland V-1HD+. This successor of the popular V-1HD features four HDMI inputs, XLR/RCA/Mic audio inputs, and it can trigger Atomos recorders via its HDMI output. Let’s take a closer look at it!

With the pandemic, live events recording/streaming are now something nearly every filmmaker and production company has to offer. To help you with that, Roland released an update to their popular V-1HD video switcher that was released five years ago: the Roland V-1HD+.

This new version features a plethora of inputs/outputs ports at the back of the unit, including:

The front panel of the V-1HD+ looks familiar to the previous version with its big T-bar, A/B programs buttons, transitions buttons, and so on. However, this updated version includes numerous new audio volume control buttons with peak lights to adjust audio on the flight.

If you want to go one step further with audio mixing (with effects like compressor, noise gate, equalizer, and a high-pass filter), this live switcher features a 14-channel digital audio mixer that allows you to integrate HDMI audio with mic/line sources.

The Roland V-1HD+ also features a couple of recall memory presets. By pressing a button, you can call up one of four still images stored in the V-1HD+. You could capture stills from a connected input source if you didn’t have time to prepare your gig early or have a late-minute request. Finally, you can use these images as DSK lower thirds or full-screen backgrounds.

Like every good live video switcher in 2020, the Roland V-1HD+ features a couple of built-in effects, including a live-keying tool and the ability to add layered graphics on top of your footage easily.

If you plug the V-1HD+ into the optional Roland UVC-01, which is an HDMI to USB UVC Encoder, you’ll have the ability to Live Stream your event on the web. The USB output of the UVC-01 connects to the USB port of your computer that recognizes it as a webcam so you can stream easily to Facebook, YouTube, or Zoom, for example.

Last but not least, the Roland V-1HD+ includes tally light support and remote record triggering of Atomos recorders such as the Atomos Shogun 7, so you can record your entire event.

In direct comparison to the Blackmagic ATEM Mini Pro that features built-in recording capabilities, 4 HDMI inputs, and retails for $595.00, the V-1HD+ can seem pricey. However, if you need all the extra input/outputs such as XLR audio inputs and dual HDMI output, the Roland can be a great option.

What do you think of the Roland V-1HD+? Did you already use the first version? Do you think all the inputs/outputs ports might be useful for you? Don’t hesitate to let us know in the comments below!