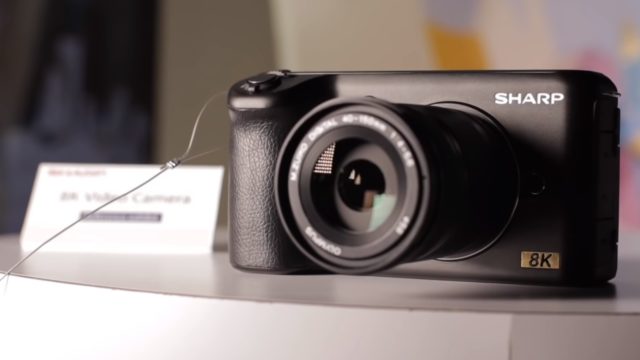 Sharp just teased a new camera with micro four thirds sensor capable of 8K video recording at CES 2019. The official announcement is planned for the NAB 2019 show, but Kinotika managed to get some information from Sharp representatives and to do a hands-on video with the dummy prototype.

The connection of the term 8K resolution and Sharp (since 2016 owned by the Chinese company Foxconn) is neither new nor surprising. They have been producing TVs with 8K resolution for a while now. Even in the field of 8K recording the company is not a new player. Already back in November 2017 during Inter BEE  show in Japan Sharp announced the 8C-B60A – super 35mm camera which records in 8K 4:2:2 10-bit. (See our interview with Masazumi Kaino-san from Sharp). The camera was primarily aimed for the Japanese broadcast market – as in Japan 8K is generally more accepted and used than in rest of the world.

Because of their 8K TV portfolio it is actually no wonder Sharp pushes 8K in the production field so much.

Please note that there is no official information from Sharp about this camera yet as it should be announced at this year’s NAB show in April. Sharp happened to have a dummy camera now at CES on their booth as a kind of  teaser. The camera does not even have an official name yet. Dave Altizer from Kinotika  however, got his hands on the dummy prototype and published a Youtube video about it.

The Sharp 8K camera will have a micro four thirds sensor and will be capable to shoot in 8K resolution (7680×4320) at up to 30fps with H.265 compression (Sharp is supposedly working on a 60fps 8K mode). When it comes to media, Sharp 8K cameras will use UHS-II SD cards. Honestly, I am a bit concerned about some specs.

Firstly, SD cards will be able to provide only a limited bitrate and this in combination with the 8K resolution can be quite tricky. For illustration, with 8K we record with four times more pixels than with 4K (and 16 times more pixels than with FHD). The H.265 compression is roughly twice as effective as H.264, but the files are not easily editable. Of course it will also depend on the codec used, which has not been announced yet.

Secondly, micro four thirds sensor with 8K resolution will have at least 33Mpx which means the pixels will be really tiny. According to Slashcam (article in German) the pixels will only have a 2,25 µm long side which is approximately the size of pixels in cheap “point-and-shoot cameras” or smartphones. Physically smaller pixels will probably result in the sensor creating a lot of noise with higher ISO values and will possibly not have a great dynamic range. 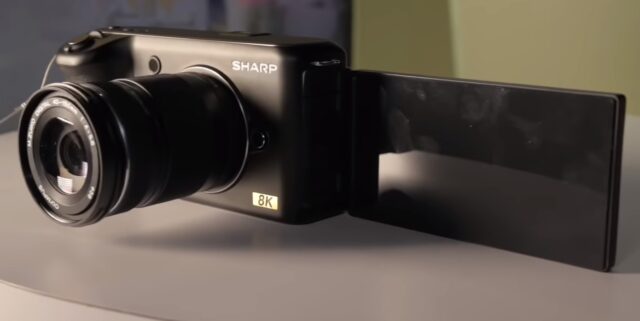 Furthermore, as mentioned in Kinotika’s video, there will be some kind of stabilization on the sensor (electronic or physical). The camera will have a huge 5″ flip out screen (Panasonic-GH-style) which I find is a great idea. I just hope the tilting mechanism will be rugged enough given the size of the display. As mentioned there are couple of physical similarities with the Blackmagic Pocket Cinema Camera 4K, like the overall size of the body or the connectors on the left side – Full size HDMI, USB-C, headphone, microphone jacks and Mini XLR port.

The camera should retail for less than 5,000$ which would be unprecedented for a device which records in 8K. I am curious about the final specs to be revealed at NAB. As much as I like the micro four thirds mount, I am a bit sceptical about its ability to handle 8K resolution. For instance, the requirements in terms of sharpness for lenses will also be higher with 8K.

What do you think of the new Sharp 8K MFT camera? Do you think recording in 8K will soon become a thing in the consumer/prosumer sector? Let us know in the comments section below