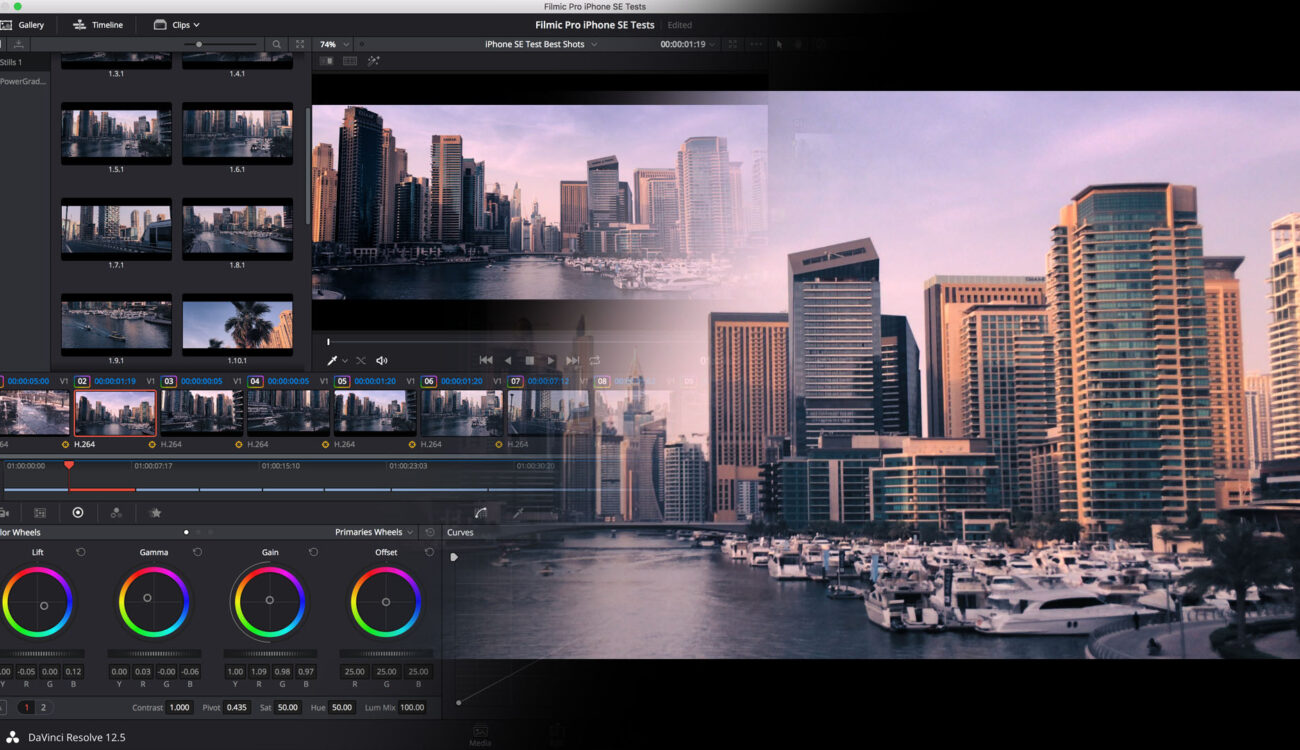 A couple weeks ago, I was out with my iPhone SE and a little camera app called Filmic Pro. Once graded in Resolve, the results blew me away.

Actually, two things really impressed me. Firstly, the amount of control the Filmic Pro app gave me. And secondly, how far I was able to take it in the grade. I posted a quick write-up on my blog last week, but I’m going to get into more detail here.

If you haven’t heard of Filmic Pro yet, you’re about to be introduced to your phone’s best friend. Please do yourself a favor and quit wasting your time with PokemonGO. Remember: you are literally dying, every second of every minute, of every hour… I’m going to show you a far better reason to spend your limited time on this earth wandering the streets pointing your phone at things.

Filmic Pro is not the only pro camera app worth mentioning, though. I plan to get into another fantastic app called Mavis in another article. But for now, it’s FilmicPro’s turn.

Before you ask, yes, Filmic Pro is available on Android, but I’ve only used it on iOS so my experiences relate to shooting with an iPhone.

What is Filmic Pro? 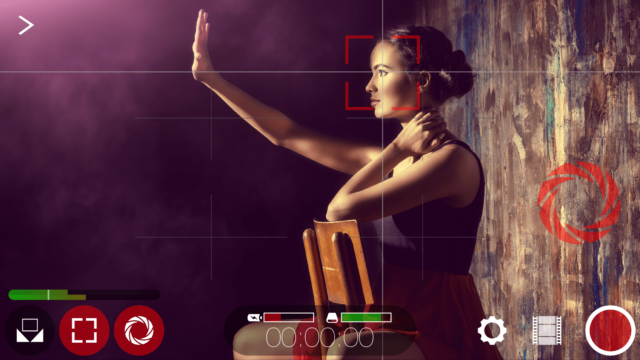 Filmic Pro is a video camera app aimed at pro mobile-video creators who want manual control over the camera, with the ability to finely control parameters, set up custom presets and – perhaps most importantly in my opinion – max out the video recording bitrate.

I am sure, however, that you’ve heard of the film “Tangerine” which was a hit at Sundance, and subsequently picked up by Magnolia Pictures for theatrical release. Tangerine made news headlines because it was shot with Filmic Pro on the iPhone 5s with some additional accessories, which we’ll touch on later.

A few other accolades and achievements:

How does Filmic Pro work? 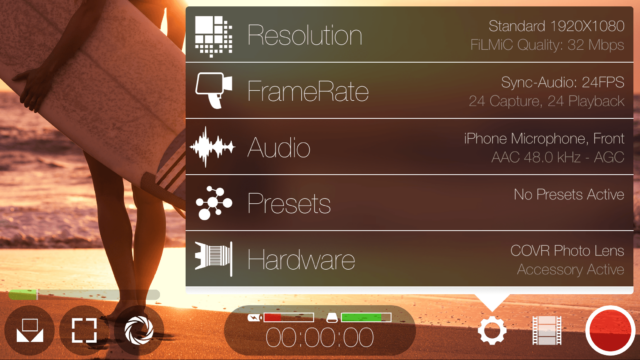 For the princely sum of a mere $9.99 you can buy the only video camera app you’ll ever need for your phone. All it takes is a simple iTunes app store purchase, download, install, and you’re ready to shoot. Easier and quicker than any pro camera firmware update will ever be.

Filmic Pro gives you manual, granular control over all the functions necessary to shoot professional grade video with your phone. Functionality depends on the device, but if you’re on the latest generation Apple iPhone’s you’ve got everything that the hardware offers you.

There are a few important things to keep in mind when shooting video with the iPhone.

The iPhone (and all phone cameras as far as I know) have a fixed aperture lens. In the case of the iPhone 6s, 6s plus and SE, it is fixed at f/2.2, which means the primary control over exposure is shutter speed, and the ISO setting. The iPhone sensor base sensitivity seems to be its lowest limit, at ISO 25, which would make sense considering the pixel pitch. I’m not sure if this is the case, but under midday sunlight for instance, the required shutter speed to maintain correct exposure at ISO 25 is at least 1/2000th sec at the fixed aperture of f/2.2. This is fine for still photos, but it’s the equivalent of a 4.32 deg shutter angle at 24fps for motion.

Assuming a normal shutter angle of 180 deg at 24fps, the shutter speed you want to achieve a cinematic feel to motion in the frame is 1/48th sec. To achieve this under strong direct sunlight will require a 6 stop reduction in light hitting the sensor, which is an ND 1.8. I have yet to test the iPhone with a strong ND, but I did try it through a ND 0.8 (almost 3 stops) and had terrible color shift and IR pollution. I have yet to test it with an IR cut filter.

I haven’t tested the iPhone’s dynamic range properly but it feels to me that the limit is somewhere between 7-8 stops. You can light for this in a controlled situation with no problem, and the magical golden hour in the early morning or late afternoon light should prove no problem for the iPhone either, but midday sun is going to produce very bad clipped highlights or turn shaded areas into silhouettes no matter what you do.

You can see from the frame grab above that highlights were clipped, and there was nothing to recover in the grade either. This was under harsh direct midday sun, in the summer, in Dubai… so pretty extreme contrast, but still it shows the limitations of the iPhone’s dynamic range.

I did shoot after sunset, but none of the shots were really usable. As you would expect of a sensor with a low base ISO, it’s going to have very limited low light performance. I would say this is certainly true of the iPhone.

So far, I haven’t used any special accessories, cases or lenses with my iPhone SE. There are a number of good options for this from various manufacturers, but the two to catch my eye are:

Moodog Labs Anamorphic Adaptor – This is the lens that gave Tangerine its signature widescreen look. This is a clip-on anamorphic (1.33x) lens which costs $175.

ExoLens with Optics by Zeiss – A set of three Zeiss comprised of a wide-angle, a telephoto and a macro. Currently, only the wide-angle is available. 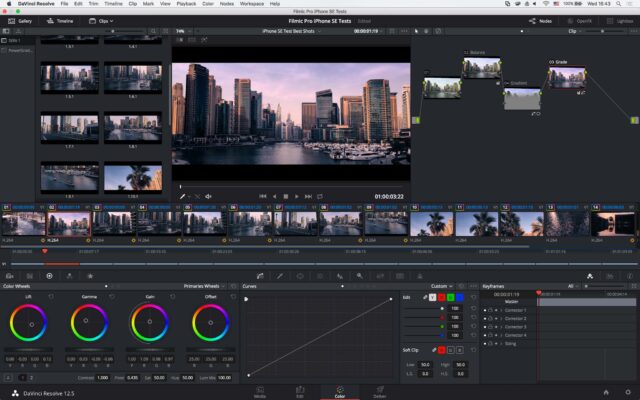 Perhaps the most surprising part of this whole experiment for me was getting the footage into DaVinci Resolve. My expectations were understandably low, as I’ve worked with 8-bit 4:2:0 H.264 before and I’ve experienced how quickly it falls apart.

However, I was able to balance the image from the iPhone very nicely and then take it to quite an extreme stylised look without noticeable banding or noticable compression artifacts. First of all, I will say I would never work in a UHD timeline nor expect an UHD deliverable from the iPhone. I was more interested in seeing how Resolve would perform a high quality scale down to 1080p, and how much better, or cleaner the resulting 1080p image might be. As it turns out, the 4K UHD media wasn’t nearly as limited as I thought it would be. In fact, the 4K UHD image was so sharp and clean at 100Mbps that I managed to crop (zoom) in up to 200% on some shots on my 1080p timeline and I doubt anyone would be able to tell. I’ve got some iPhone SE video frame grabs up in the article on my site which show the image crop of 4K UHD source media at 150% and 200% on a 1080p timeline.

The Future of Mobile Cinematography

Filmic Pro has turned my skepticism into a solid belief in the whole mobile videography movement. In the words of Chase Jarvis “The best camera is the one that’s with you”, and as our phone cameras improve technically, this is an exciting field which is only going to get better.