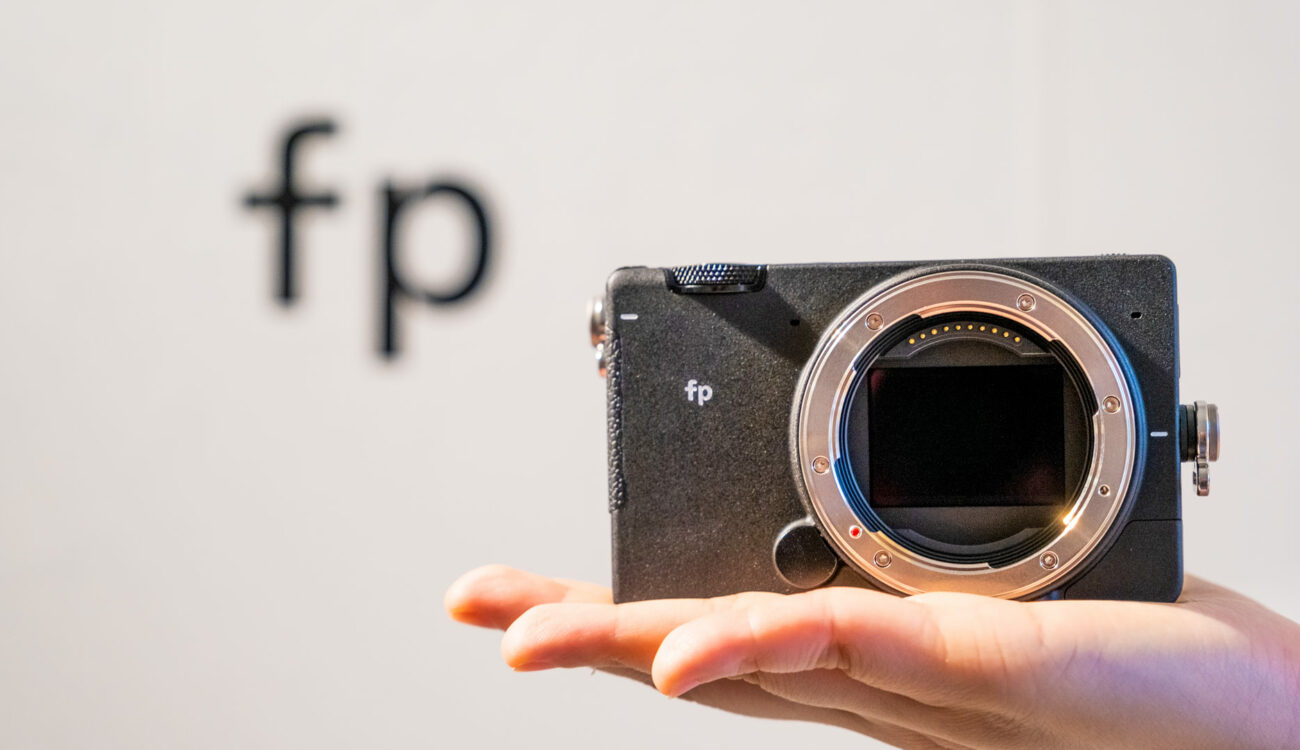 That one got us by surprise! Along with the introduction of quite a few new lenses for Sony E-mount as well as L-Mount, SIGMA has just unveiled their newly developed SIGMA fp camera, sporting a full-frame 24.6MP backlit sensor! It comes with some welcomed tricks and fresh ideas such as a dedicated switch to set the camera either in stills mode or in cine mode. 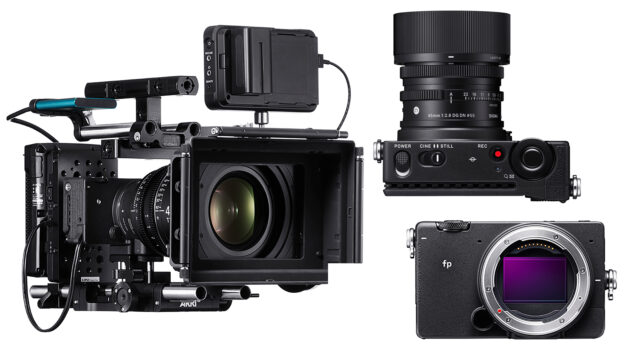 So here it is: SIGMA’s first camera with true dedication for cine applications. It’s based on a traditional BSI Bayer sensor but this camera is unlike any camera I’ve seen in a very long time. According to SIGMA, this camera is free from genre or categories and it’s designed to be a true user-centric camera.

The camera itself is really tiny, more a box than an ergonomic camera. That’s because SIGMA wants this camera to be as modular as possible to be able to cater for most shooting scenarios. From stills shooters to indie filmmakers, the SIGMA fp can teanform into anything you like it to be. That’s the idea.

The back-illuminated Bayer CMOS sensor is 36x24mm with an effective resolution of 6,072 × 4,056 pixels, resulting a total of 24.6 megapixels [in an earlier version we mistakenly wrote 60 megapixels]. The camera uses the new L-Mount which makes total sense as SIGMA is part of the L-Mount alliance and already produces L-Mount lenses. 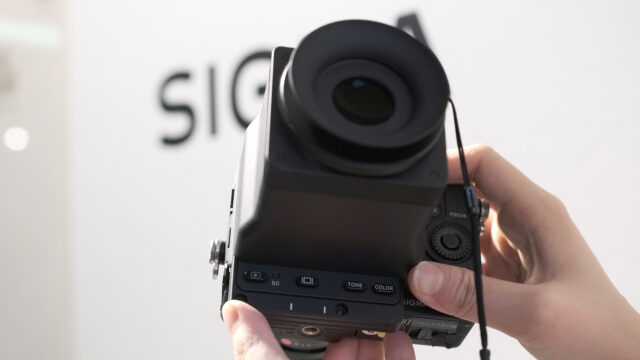 The SIGMA fp comes with a dedicated switch for putting it into either stills or cine mode. And each of the modes transforms the whole camera system in order to only display the items of importance to each use case. No more digging the menus for that specific video setting! Very nice. Furthermore, it comes with a dedicated video record button.

The SIGMA fp records either raw CDNG in 8, 10 or 12bit (externally to SSD) or it records plain h.264 into a .mov container either in all-i or GOP mode. Supported resolutions include:

I couldn’t find any intel about color sub-sampling yet but will add these information once I have them. Another thing which is still a bit unclear is the fact that SIGMA states a 1.5 crop in the specifications. Maybe that crop applies to video recording (or UHD recording, at least). It also could be just an option (as seen in the menu – video above @ 2:34), which would be the best possible solution, of course. We will update this article as soon as we know for sure. 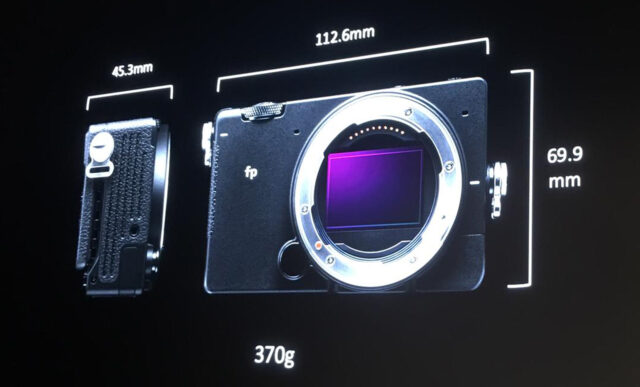 still from the presentation of the SIGMA fp.

For external recording, the video feed can be send out through USB 3.1 (GEN1) to a fast outboard SSD or through HDMI (4:2:2 8-bit only as it seems) to an external recorder. SIGMA specifically names ATOMOS Ninja Inferno and Blackmagic Video Assist 4K as supported devices. More makes and models should follow I assume.

Note: The in-camera playback function of recorded CinemaDNG frames will be implemented later with a firmware upgrade so as of now you can shoot CDNG but you can’t play it back on the camera itself. Another curiosity: In their press release SIGMA claims that the fp is able to record 12-bit raw CDNG externally through USB 3.1 while further down in the specifications it reads that the camera is able to record 12-bit raw CDNG internally. We will have to wait and find out what’s actually the case here. 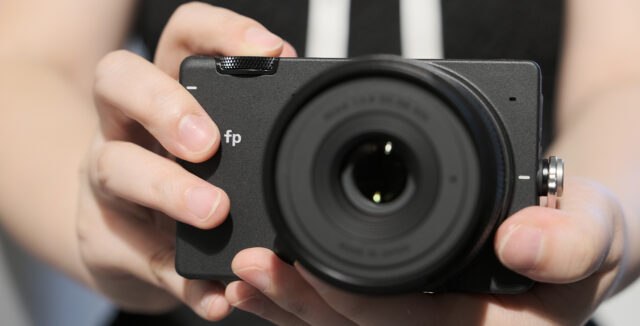 The fp camera records to one of the following types of media: SD / SDHC / SDXC Memory Card (UHS-II compatible). Furthermore you can use an external USB3 SSD which will be bus-powered. The BMPCC 4K springs to mind! 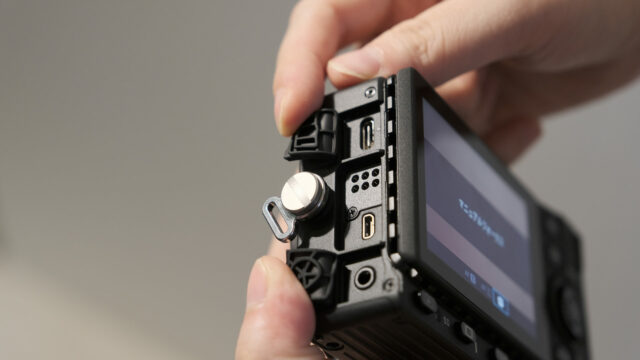 Since this camera sports not one but two cameras in one body, let’s run through the features of both modes! In general, this is really a nice (maybe even overdue) feature to have in modern mirrorless hybrid cameras. Using the dedicated switch you can flick between stills mode and cine mode effortlessly without any menu digging. 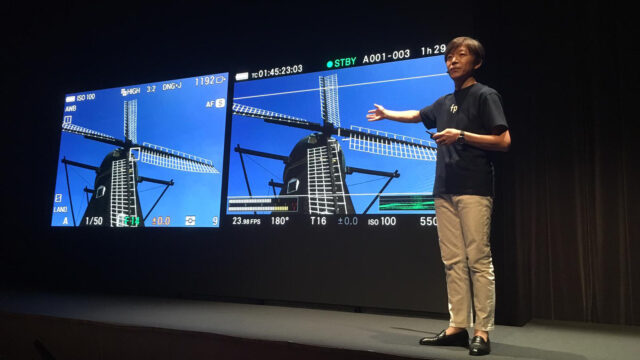 Furthermore, in each mode you only get the relevant information displayed on the screen and these information reflect the mode you’re working in. For example you’ll get a 16:9 image in cine mode without any overlaying icons. You can, however, enable some overlays such as audio meters or a waveform monitor. Additionally frame guides can be displayed (and adjusted of course).

TC will be displayed in cine mode but not in stills mode. Exposure correction is a feature stills photographers need, video shooters not so much. You get the idea. I think this feature alone is a huge breakthrough for video capabilities on small mirrorless cameras such as this SIGMA fp. Other manufacturers should think about separating both modes of operation as well!

The SIGMA fp is a tiny camera, indeed. With overall dimensions of 112.6×69.9×45.3mm and body weight of 370g, without battery and card, the SIGMA fp is not your average mirrorless camera. Maybe that’s why the fp stands for fortissimo & pianissimo: Strong and light at the same time. 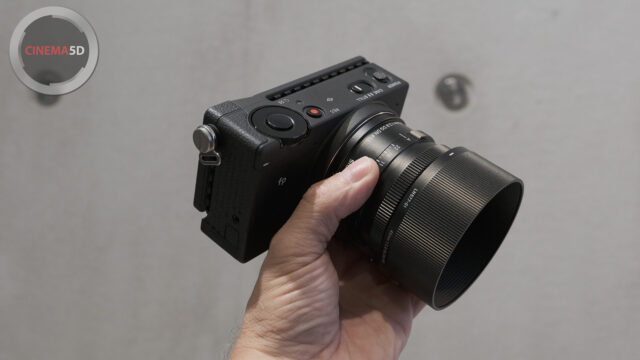 The rear TFT screen can’t swivel or tilt. It sports approximately 2.1 million dots and it’s a touchscreen, of course. The camera offers a 3.5mm mic input and, as a scratch audio source, a built-in stereo mic. It also offers a tiny speaker for audio playback but somehow SIGMA forgot to implement a headphone jack. That’s really a bit strange since this camera is clearly aimed towards video (at least in cine mode), so I can’t think of any reason to not implement a headphone out.. Maybe SIGMA adds this with a future module of some kind. Let’s just hope proper audio has not been forgotten here.

The SIGMA fp offers a a so-called director’s mode, i.e. director’s viewfinder. With it you can mimic another camera’s sensor size as well as film cameras and even anamorphic lenses. Available and build-in camera profiles include the ARRI ALEXA LF, Mini LF, AMIRA, Sony VENICE, RED MONSTRO 8K and many more. So this camera could even be a directors accessory on fully-flegded productions. Not exactly necessary but still a nice addition. In a later firmware upgrade you will also be able to record and playback video while in director’s mode. 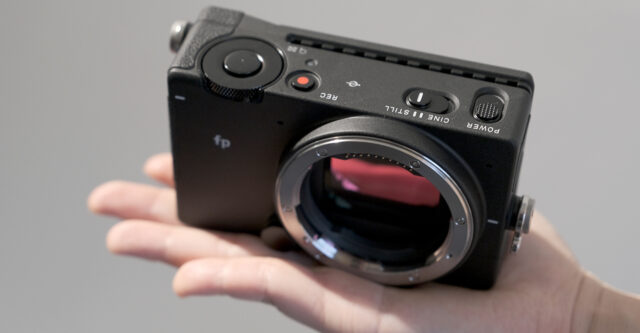 With a whole stack of accessories for this new camera, SIGMA lets you transform it into whatever camera you like. Add a handgrip and a hot shoe for adding a flash? No problem! Need a proper viewfinder and a large handgrip along with a mount converter for shooting video? Not a problem! 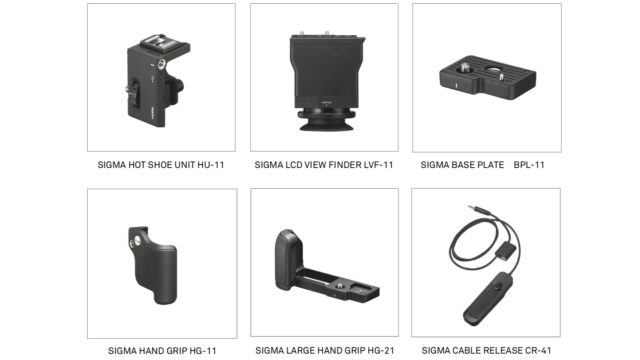 You really can transform this camera to match your exact needs for the given job. Pretty neat I’d say. For a full review we need to go hands-on of course but from what I can see here this SIGMA fp could be a really capable tool for stills shooter and indie filmmakers alike.

In terms of power, the fp uses a SIGMA lithium battery (Li-ion Battery BP-51). And since the camera sports USB, you can charge the battery through that USB port, but only if the camera is turned off. 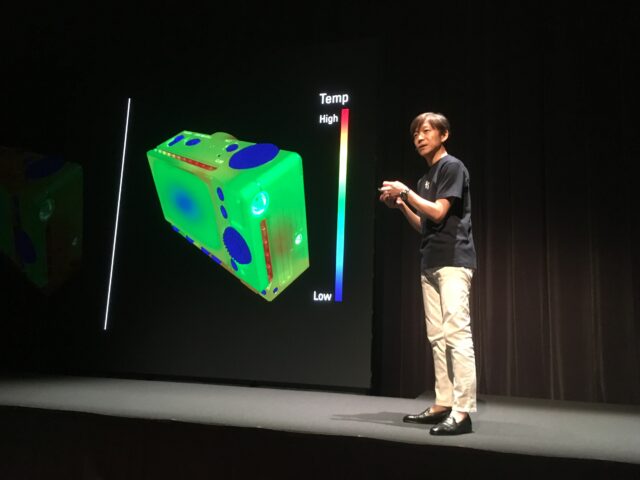 The SIGMA fp is set for a release later this year (around fall) but there’s no word on pricing yet. 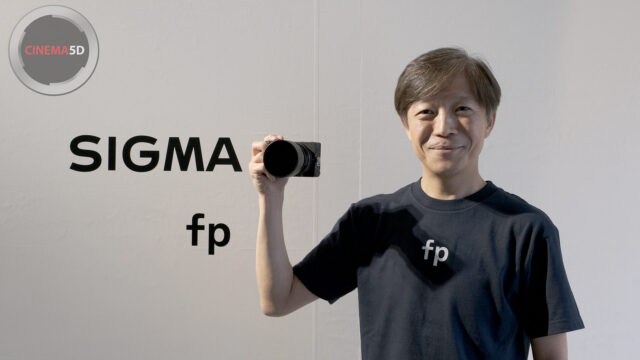 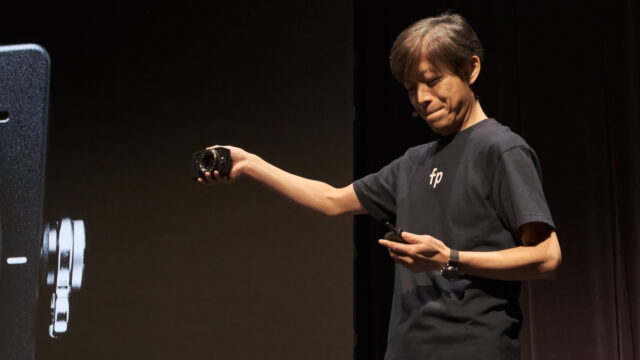 I love this photo. A moment of pride

What do you think? Is this the camera you’ve waited for? Share your thoughts in the comments below!