During Inter BEE 2019, we had the chance to talk with SIGMA about the upcoming firmware update for the fp camera. We’ve been told that a firmware update will bring exciting new video features such as in-camera playback of cinemaDNG footage, and something that a lot of shooters are waiting for: a LOG picture profile and RAW output video recording via HDMI. Let’s take a closer look at it! 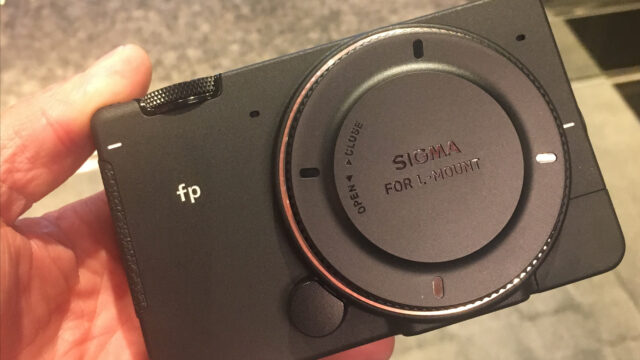 Inter BEE 2019 is now over, the SIGMA fp is shipping for some weeks now, and it’s a trendy camera amongst filmmakers.

The SIGMA fp is a compact full-frame mirrorless camera capable of recording Cinema DNG 12bit RAW to an external SSD at up to 30 frames per second in 4K UHD, and up to 120 fps in HD – Cinema DNG 8bit internal recording to SD card is possible too. The camera features an L-mount, it is competent in low-light conditions, and, the build quality is top-notch.

For more information, you can take a look at our review here and our exclusive behind-the-scenes on how the SIGMA fp is being made.

During Inter BEE 2019, we had the chance to talk to Takuma WAKAMATSU – SIGMA’s product planner – about the upcoming firmware update for the SIGMA fp cinema camera. Earlier this month, the camera already received a firmware update to fix a couple of bugs mainly related to CinemaDNG RAW recording.

SIGMA has already announced that the following features are coming on the next round of firmware update:

But the BIG news is, that at a later stage further enhancements to the camera will be made. Those will be pushed via a firmware update too:

Nice to see that SIGMA is listening and doing its best to enhance the video capabilities of their new camera!

Those upcoming firmware updates should be free of charge and will come during next year.

What do you think of this upcoming firmware update? Do you already own the SIGMA fp camera? Let us know in the comments below!