Simon Says, a transcription software solution, launched a new version of their on-premise Ai transcription application for both Mac and PC. In addition to their cloud-based solutions, the on-premise app is suitable for sensitive content as it transcribes video files locally on the user’s computer. 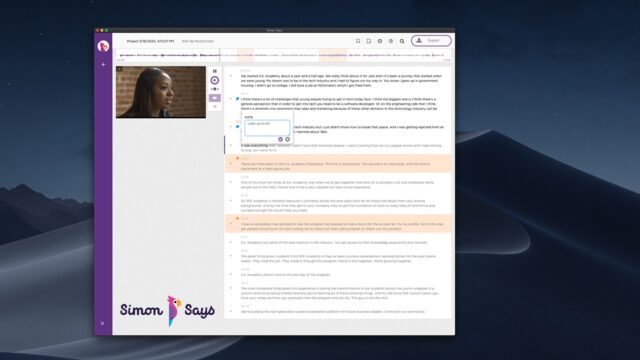 In case you never heard of Simon Says, it is a transcription software for video. It automatically converts spoken text in audio track into written text, so it’s useful when creating subtitles, script, or translating a video. Simon Says can export to multiple formats for easy integration with most NLEs and it is compatible with many languages.

Simon Says offers both a cloud-based solution and local on-premise applications. Recently, they launched a new version of the on-premise AI transcription solution. What does it mean?

The updated on-premise transcription solution goes hand-in-hand with an improved Mac/PC application that now has a more accurate A.I. engine and faster interface. On-premise means, that the software runs directly on the customer’s computer – there is no need to send the video files for transcription to a remote server. This can be especially useful for sensitive content where higher security is needed.

As Simon Says states, “on-premise transcription is something that customers have been demanding a lot”. They received many requests from productions to offer a transcription solution in which the data remains local. Some productions have compliance requirements such as that of their client agreements, their IT departments, and frameworks like TPN, MPAA, CDSA, SOC 2, and HIPAA.

Simon Says has been testing the on-premise solution with early customers since 2018 and much of their feedback was implemented in this update. According to the company, their early customers are seeing 95%+ accuracy rates with the transcription, especially when the content has little or no background noise.

The app should be able to run on any modern laptop, both Mac and PC. Setup takes only around 15 minutes. Workflow is quite simple – import, transcribe, export. With seamless NLE and workflow integration, the workflow is quick and intuitive. Users can drag and drop dailies in, swiftly export transcripts out, straight into Avid Media Composer, Adobe Premiere Pro, Final Cut Pro X, DaVinci Resolve, and others.

The pricing of the cloud-based solution from Simon Says is based on a pay-as-you-go model (which costs around $15 per hour of material) or subscription model, where the cost per hour is lower, but there is a monthly or annual fee. The on-premise solution is available with a minimum of 100 hours, but there is no price on the website. For more information, visit the Simon Says Pricing website.

Do you need to do transcriptions often? Which software do you use? Were you familiar with Simon Says? Let us know in the comment section underneath the article.