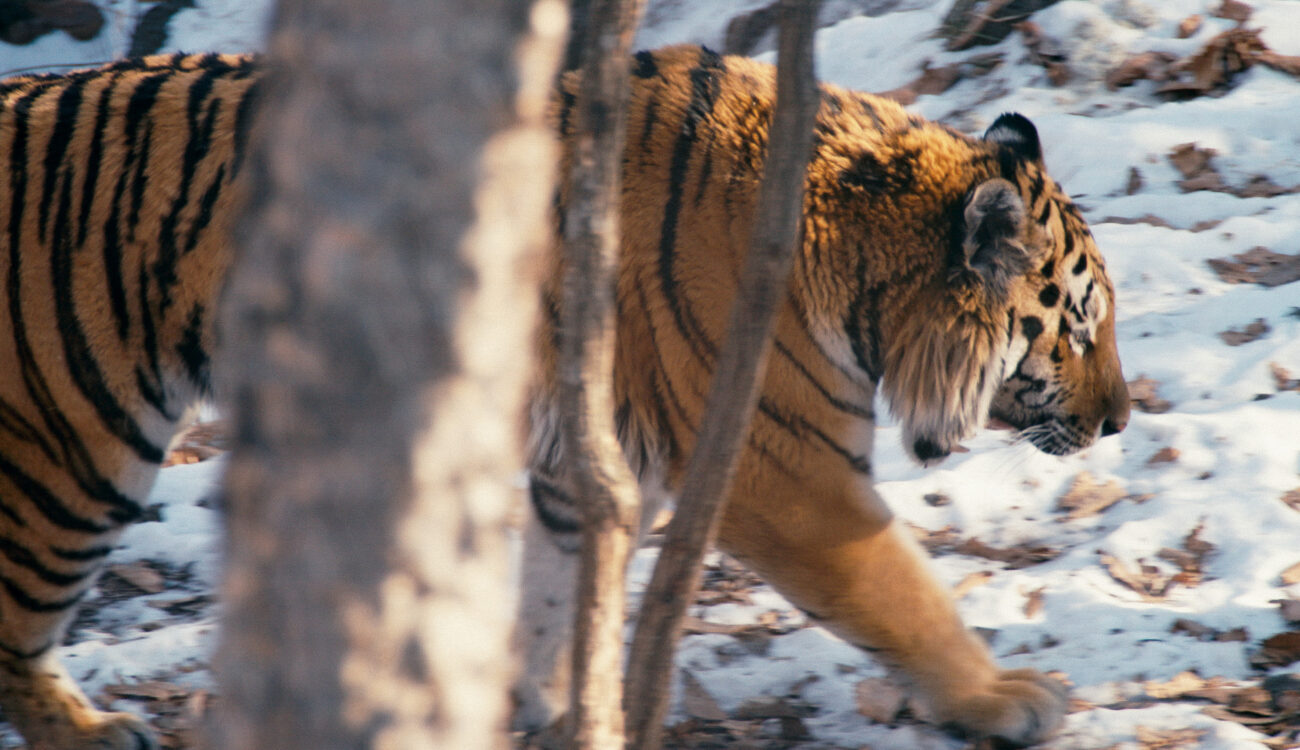 You may know documentary DP, Matt Porwoll, from his work on the gutsy academy award nominated documentary, Cartel Land.  We also featured him last year at Sundance for his work on the movie The Trade. He’s back at the festival with a new film, Tigerland, helmed by veteran doc director, Ross Kauffman (Born into Brothels).  Tigerland follows the fight in Russia and India to protect tigers from extinction. 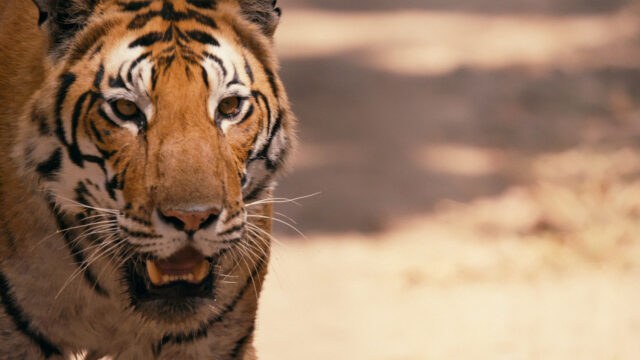 DP Philosophy: As a documentary cinematographer, I always try to soak in an experience and capture it in a way that best conveys the character’s experience. This is oftentimes difficult, but it’s also what I love most about vérité documentary. The more time you spend with your characters, the more you can relate to them, and ultimately the better insight you can give to the audience. So with that, I try to build relationships with the characters that are built on trust. In the moment, I don’t like to have a lot of people in the room. Ideally, just the director, camera and sound. Many times its just camera and sound with the director watching wirelessly outside the room. The less it feels like we’re making a movie and more that we are active participants in the moment, the better off it’ll be. This approach passes down to how I like to work with the crew. When I have a camera assistant with me, I like someone who can anticipate; thinking ahead to what might come and prepare for it. I like someone who can wear many hats, because in documentary production, less is more. When I know there is someone just outside the room prepared with what I might need, while also keeping that entire process hidden from the characters, the better off the film will be. Obviously this can be a difficult endeavor, but if it can be our guiding principle, then we’ll be in good starting place when things get challenging.

cinema5D: What camera body did you choose for this film? Why?

MP: We chose to shoot Tigerland on the Canon C300 MKII for a variety of reasons. This was a story that begged for beautiful images shot in 4K, but also had the challenges of a vérité documentary that required flexibility in build size and an ability to hold up under harsh shooting conditions. I have been a longtime user of this camera, and have found it extremely capable of delivering on all of those requirements. On this film, both Ross Kauffman, the director, and I were shooting, so we could build out the camera to our liking from a compact body-only setup all the way up to a full should-mounted rig. It’s incredibly flexible in that regard. We found ourselves shooting in all kinds of environments, from riding on snowmobiles in Far East Russia to the back of dusty trucks in India, with temperatures ranging from 35° below 0 to 110° F. I don’t know of any other camera that could handle this extreme range of conditions without constant care and attention. And to top it off, we shot in DCI 4K with Canon’s beautiful color science to deliver a gorgeous image.

In addition to carrying 2 C300 MKII’s in Russia and 3 bodies in India, we brought along a DJI Osmo to Russia for filming off the back of snowmobiles, employed a DJI Inspire 2 shooting in CinemaDNG/RAW for aerials, and a RED Epic Helium for slow motion in India.

cinema5D: What optics did you pair with the Canon C300 MK II and the RED Helium? Did your lens choices vary by region or environment at all?

MP: The lenses played such an important part in the look of the film. We wanted our two main storylines to have a different feel, while also having ways of blending them together in the edit, so we tailored our lens choices around that.

In Russia, we wanted to convey the cold, stark feel of winter, so we chose to use the Canon CN-E Compact Zooms 15.5-47mm and 30-105mm T2.8 for the vérité scenes. Theses lenses are incredibly sharp with good contrast that beautifully draw out those qualities. For our atmospherics, we used the Canon K35 primes. These lenses have a gorgeous quality of lower contrast, interesting flares and a lot of character.

In India, we wanted to complement the richness of color and light, so we used the K35s as much as possible. The images produced from these lenses feel like you’re in a dream. When prime lenses weren’t appropriate, we used the Canon Compact Zooms, but paired them with a Tiffen ¼ Black Pro Mist to soften the highlights and slightly reduce the overall contrast. For all of our wildlife footage, we had the Canon CINE-SERVO 50-1000mm T5.0-8.9. This was an amazing lens to work with, not only for its incredible telephoto ability with tigers or the setting sun, but also in-scene with the ability pull back to 50mm and really feel the location. 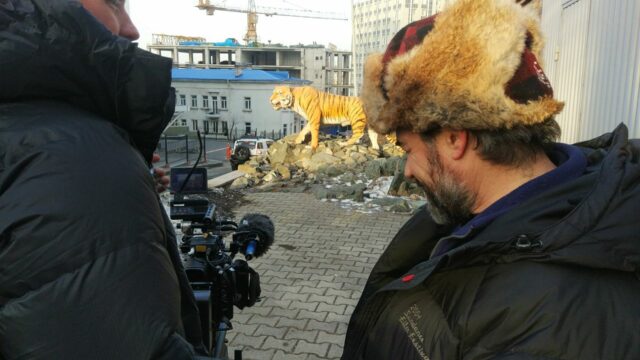 cinema5D:  Talk to me about your process working with Director, Ross Kauffman. Did you reference specific films to get on the same page regarding the look of the project?

MP: From the beginning, Ross Kauffman had a very clear vision of how he wanted the film to look. We knew there would be a blend of vérité, archival and animation elements, so we discussed how to give these elements their own feel, but also allow them to blend seamlessly for the edit. Despite this being a documentary, many of Ross’s visual inspirations came from the narrative films of Terrence Malick like The Tree of Life and The Thin Red Line. We wanted the atmospheric imagery to have a grace and beauty to them that properly conveyed the majesty of the landscapes and the mysticism of the tiger. With these films in mind, we tried to capture something that evoked our own feelings of being in these beautiful environments. The camera and lens choices played heavily into making these shots a reality.

cinema5D: Were you both on the same page the entire project when it came to doc coverage?

MP: Both Ross and I come from a vérité documentary background, so even though there’s a good amount of this language in the film, there were new challenges for us to actualize with visual poetry. We constantly talked about the ethos of the tiger, its impact on people’s imagination and so on. We did some digging into our own perceptions to see the best way to visualize these impressions. It was a wonderful experience for me to work in this way with a fellow documentary director. 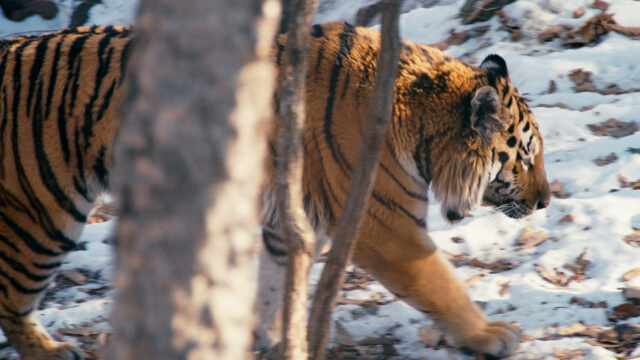 cinema5D: Any new gadgets find their way into your kit for this project?

MP: Despite having multiple camera bodies and a full zoom/prime lens package, we tried to keep our gear to a minimum since we were shooting a vérité film. With that said, the one tool that was incredibly useful to have was a DJI Ronin 2. It had just come out while in pre-production, so I decided to upgrade my original Ronin for this project. We found it incredibly helpful with shooting tracking shots of our characters and rigging onto our safari vehicle for driving shots through the tiger preserve. I feel the shots produced from the Ronin 2 really helped elevate the footage in the film.

MP: So that we could use the same cinema zooms in both Russia and India, we employed the Tiffen 1/4 Black Pro Mist in India to offer a different feel to the images produced. I also always carried a set of ND’s, ND Soft-Edge Grads for landscapes, a Polarizer for richer skies and killing reflections and a Clear filter for the dust.

cinema5D:  What does the future of documentaries look like in your opinion? It seems like we are in a bit of a golden age.

Documentaries have exploded in popularity over the last 5-10 years. Its incredible! Through this expansion, the expectation of the quality has gotten much more critical. Gone are the days that a doc is expected to not look as good as narrative films. As a documentary cinematographer, this is exciting, but also quite challenging. I grew up learning from the greats of vérité filmmaking where the mantra has always been content over style. Sadly, I think this emphasis has been turning towards style over content, but it has also lit a fire under us all to maintain the integrity of the stories we are telling, while also pushing us to make them look as good as possible. It is certainly an incredible time to be working in the art form.

To see more of Matt’s work you can visit his website HERE.

Distribution: You won’t have to wait long to check out this wildlife conservation doc. Tigerland was acquired in advance of the festival and it airs on March 30th on the Discovery channel.