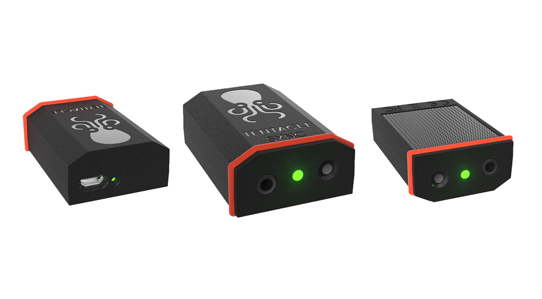 Tentacle Sync is a little black box that works with both your camera and audio device. It generates audio timecode, which along with their software (or any program that acknowledges audio timecode sync) will sync your visuals and audio.

To pick up where the above video was a little vague – just like a microphone, Tentacle sync connects to your audio device/camera via an audio channel; it’ll use up one of your XLR channels/mini 3.5mm jack mic input.

It then produces timecode as an inaudible tone, for XLR devices this would be down the respective channel you select, and on cameras like a DSLR/mirrorless with a mini jack connection, it will send the timecode tone down one of the stereo channels.

You sync both Tentacle Sync bricks via their mini jack inputs (one slaves from the other); you’re then good to connect them up to your video/audio devices for the day.

You may be wondering then, what about reference sound? Well, technically with Tentacle Sync you don’t need reference audio, as it doesn’t rely on waveforms to sync devices. But for piece of mind, Tentacle Sync has a built in microphone.

PluralEyes revolutionized the (for many indie filmmakers) unfamiliar process of dual system sound after companies got into a price war with cameras and started missing fundamental features (ahem, audio) with their releases.

The software package owned by Red Giant allows you to throw multiple sound and video sources at it, syncing audio by analyzing repetition in the waveforms. And coming in cheaper than Tentacle Sync, it’s surely the better option, right?

In many regards, PluralEyes is the better option. The initial outlay is cheaper, and when you add 2 or 3 cameras into the mix the margin extends in PluralEyes favour. However, PluralEyes relies solely on familiarities within the waveforms; if your camera records bad reference sound or your third camera is a long way from your main audio source (i.e. picking up additional ambient interference) then it doesn’t work.

Here is where Tentacle could be a valuable device on set, you can be in another room to your audio device and still sync seamlessly. It will quite simply work in every situation and is more compatible with established workflows in TV channels (you might have used a Clock It timecode generator before).

The full Tentacle Sync package comes with their software that will quickly sync files. As mentioned previously, you do not require this software for sync; Tentacle Sync generates LTC-Timecode according to the SMPTE-12M standard and will therefore sync with any compatible software.

Tentacle Sync provides a host of cables to allow you to link up your respective camera/audio device. It ships as standard with a mini jack cable, a move that suggests their main target audience.

Each brick contains an internal battery allowing up to 40 hours use. Recharging is achieved via micro USB. A Velcro back allows you to connect to any surface you require, it would be nice to see a 1/4 20″ thread also.

Check out the IndieGoGo campaign for more info on Tentacle Sync and rewards.