Operating heavy cameras over long shoot days can be hard on the body and there are several products on the market that aim to transfer the weight of the camera to your hips.  The Ergorig takes a unique approach to that weight transfer in a form factor that stays fairly compact. I stopped by the Ergorig booth at Cine Gear to give the new support system a try. 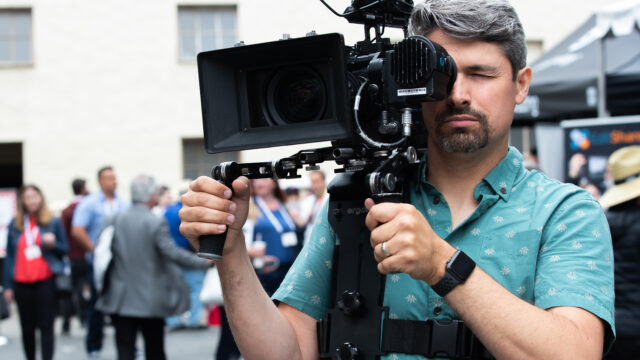 I personally shoot on the shoulder all the time throughout a variety of different genres and the act of carrying a heavy camera takes a toll by the end of the filming day. Standing at 6ft 2 inches I’ve struggled in the past with other support options on the market that raise my height as much as a foot or more (door frames were not designed for this). 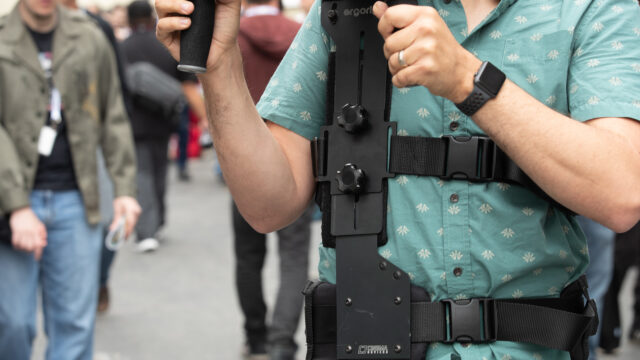 The Ergorig gives you what amounts to a second spine and prevents you from hunching over while maintaining a form factor that doesn’t extend much beyond your normal body size. It forces good posture and has a nifty shoulder design that floats the camera slightly off the shoulder, but not to the extent that I felt like I was losing control over the shot. 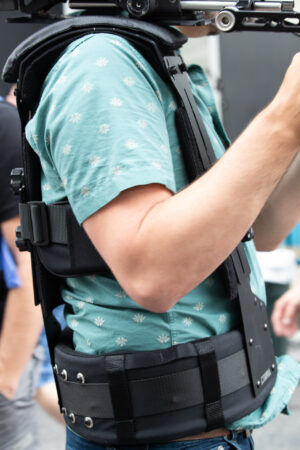 At $1850.00 it also comes in slightly cheaper than several camera support competitors, but it obviously wouldn’t help you with the weight of a gimbal, for example. For now it only comes in two sizes (standard and small) though you are able to make incremental adjustments to fit your particular measurements beyond those two core sizes. The Ergorig weighs just 5lbs and took only a minute or two to size and put on.

During a quick show floor demonstration, led by Jesse Feldman from Ergorig, I shouldered an Alexa that weighed in at about 37 lbs while wearing the Ergorig and it definitely transferred the weight in a positive way. I’d love to see how the rig fairs under constant use over a period of months. We’ll reserve final judgement until we’re able to get our hands on a unit for a full review, but early signs are promising.

For more information on the Ergorig you can visit the manufacturers website HERE.

What do you think? Does this seem like a good solution for those long shoot days of filming with a shouldered camera? Let us know in the comments below!