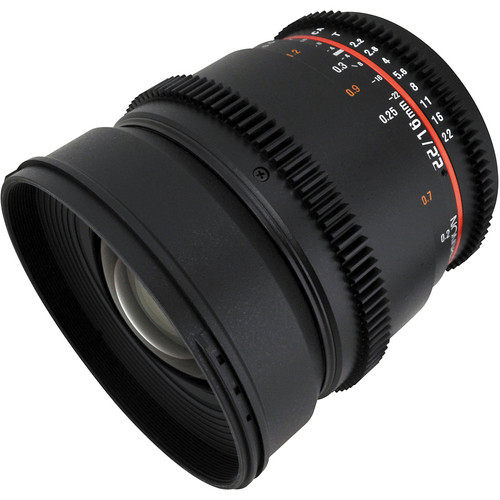 Also known under the names Rokinon and Bower (list of best deals here), the newest addition to Samyang’s famous cine-lenses is a 16mm wide-angle lens with a T-stop of 2.2 (equals more or less F/2.0) which has just gone on sale.

The new 16mm wide angle “cine” lens that covers the APS-C sensor size retails for $489 which makes it along with the rest of the line-up another addition to the most affordable cine lenses on the market.

What Samyang means when they say “cine” is that the lens has a gear included in its design on the (stepless) aperture as well as the focusing control which is a convenience for filmmakers using focusing units. There are also hard stops which are required to keep the focus precise. What Samyang’s “cine” lenses are lacking however in comparison to other cine lenses that retail for 10 times the price is the following which you should know: They are made out of plastic and don’t have the same rigidness, they do not have the front diameters to accommodate matte-boxes and they do not have the large focus throw that expensive cine lenses are known for. However these lenses are still a great choice for budget filmmakers as they are covering a few of the filmmakers needs.

The optical qualities of Samyang’s cine line is very good for the price and numerous positive reviews confirm that while being a famous pick among filmmakers with small budgets.
If you are looking for lens bundles: In our cinema5D gear-guide we now have two great bundle deals: We chose these bundles as an entry level lens starter kit and you will not find a better price for these anyhwere else. LINK

Also check out our updated list of all Samyang cine lenses and the best deals: LINK