During Inter BEE 2018 we talked with japanese filmmaker Katsuhido Masuda, who is using a very tiny toy drone with 1080p camera for his video productions. As drones are getting smaller and tiny cameras better, are they going to be the future of filmmaking?

Drones are getting smaller and their cameras better very quickly. A good example would be DJI with their Mavic Pro, Mavic Air and Spark line of drones, which can all be considered quite small. Maybe it is still not small enough though. As capable camera units get smaller (smartphones be the evidence), I believe there is still plenty of room in miniaturizing camera drones.

During Inter BEE 2018 we met and interviewed japanese filmmaker Katsuhiko Masuda, who is runing a video production company producing for example VR content for Oculus. He built a very tiny toy drone with FPV camera and uses it now for his productions. He flies the drone often in interiors and through considerably tight spaces to give another perspective to his images. 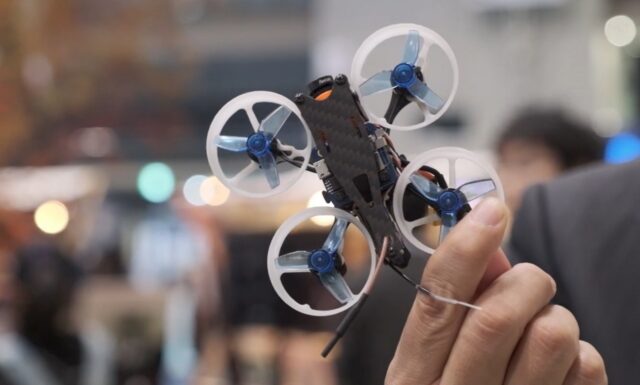 The concept of using a very tiny toy drone for filming is not new. You might still remember the impossible drone shots from Robert McIntosh, who used his great drone piloting skills to promote his own After Effects stabilizing plugin ReelSteady. In case you did not see them or you want to refresh your memory, here are the links to our older articles – Impossible drone shot I and Impossible drone shot II. The resulting videos are very impressive thanks to the multiple very tight fly-throughs.

Robert used a very tiny toy drone and attached a stripped of GoPro Hero4 camera to it. The takeoff weight of the whole setup was only 120 grams including the LiPo flight battery and foam roll cage. The battery had to be tiny so the drone could carry it and therefore the flight time was only couple of minutes. The footage straight out of the GoPro was of course not stabilized, but ReelSteady plugin managed to get a smooth resulting clip.

The point is – this is the most interesting thing about filming with such a small drone. It can fit in very tight spaces and it usually is more agile which is vital for filming in interiors. Very low weight is on the other hand not so great for exteriors as even the slightest wind will affect the micro drone. 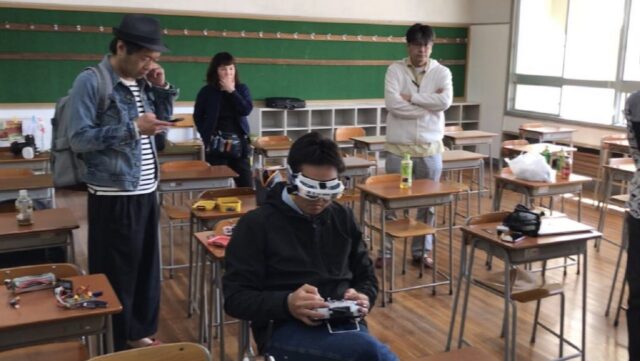 Operating the micro drone with the FPV Goggles. Source: Videosalon.jp

According to the japanese website Videosalon, the micro drone which Katsuhiko uses for his shooting is a slightly modified racing drone Nano Vespa 80 HD DVR. The camera unit used on the drone is capable to record 1080p video in up to 60fps and save it to micro SD card. Unfortunately no info about the bitrate or codecs. The overall weight of the setup is 68.4g. Drone operator can fly the drone with FPV goggles.

Comparison: left side – Robert’s Drone with the GoPro, right side – Katsuhiko’s drone.

Both micro drones (Robert’s and Katsuhiko’s) look actually quite similar and have similar size. The camera unit used on Katsuhiko Masuda’s drone definitely is much smaller than the stripped down GoPro Hero4, but it logically also offers lower video quality. Katsuhiko told us it is a 1080p FPV camera. He also stabilized the footage, so the resulting resolution is probably a bit les than full HD. In my opinion the image quality is sufficient, but there sure is lot of space for improvement and image-quality-wise I am still more convinced by the stripped down GoPro (which on the other hand was bulkier).

Disadvantage of these small toy drones is the flight time. It usually does not exceed few minutes, because the battery cannot be too heavy to keep the drone compact and agile. Katsuhiko’s drone can fly for only about 2 minutes. Such a short flight time requires a certain workflow and lots of practice as every mistake means replacing the battery and taking-off again.

Important part of design of the micro drones is that the propellers are protected with guards. Without them close flying by the actors would increase the danger of injury.

I am looking forward for the very tiny cameras to get better, add high bitrate and 4K capabilities. I don’t think this should be a big issue – flagship smartphones already have such a technology in their camera modules. Putting them in a smaller package on the back of a tiny toy drone should be possible.

In terms of stabilization – I don’t think physical gimbals can be the right future for very tiny drones. I would say it will rather be some kind of good electronic stabilization, like for instance the hypersmooth in the GoPro HERO7 black. For non-stabilized footage there is always the option to do it in the postproduction. ReelSteady seemed to do a good job, but there are other options too. In this case it is vital for the small camera modules to get higher resolutions as post stabilization eats up some part of it.

What do you think of the footage filmed with the tiny toy drone? Do you see it being used more in the future? Let us know in the comments underneath the article.