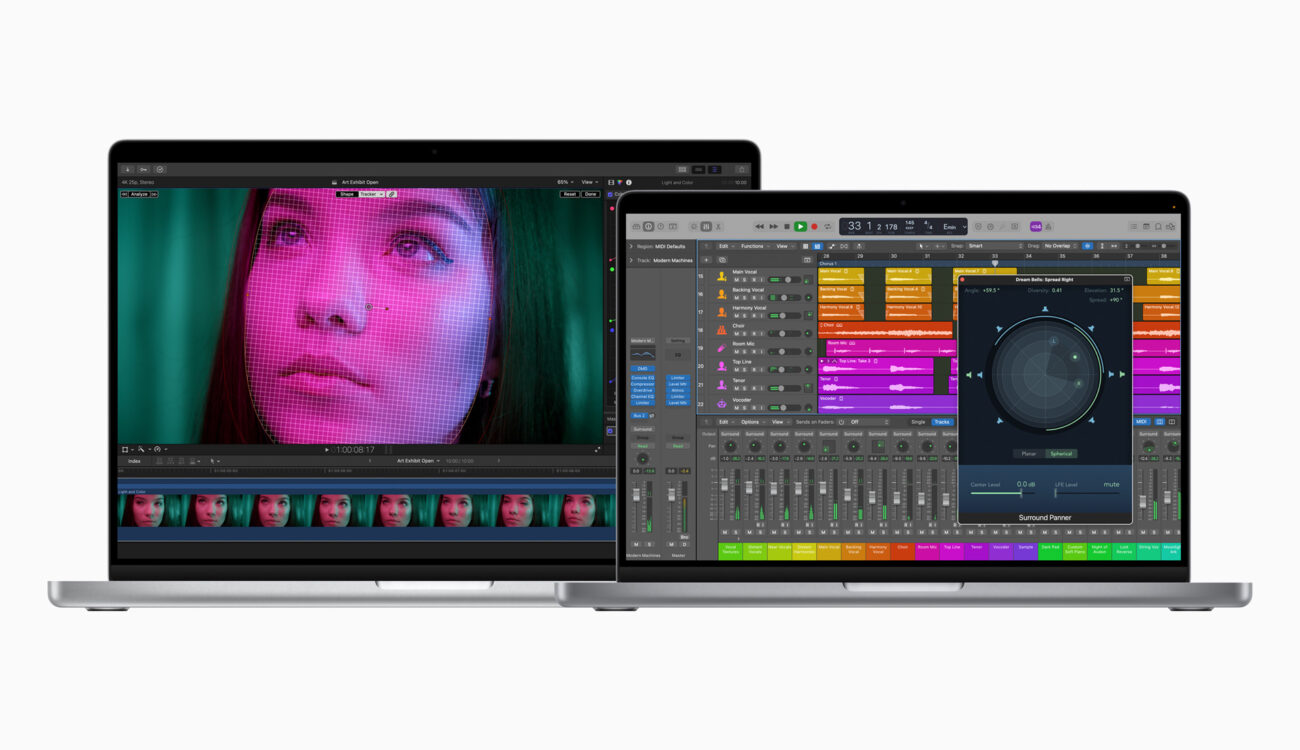 In the wake of the recent announcement of new MacBookPro hardware Apple also dropped updates to its Pro Audio and Video apps: Apple updated Final Cut Pro and Logic Pro. They both got new features and optimizations for the M1 Pro and M1 Max chips in the new MacBook Pro. As the new hardware is not out, we can’t test the performance yet. But there is some interesting new stuff in the updates for Apple Final Cut Pro and Logic Pro – let’s take a closer look at it!

The pro audio software now allows creating and exporting songs as Dolby Atmos music files. These are compatible with Apple Music’s spatial audio. Existing Stereo projects can be converted to Dolby Atmos using a new mixer. 13 plugins were updated to support surround channels in Dolby Atmos. Apple claims that when running on an (unspecified) new MacBookPro — users can expect workstation-class performance. Logic also comes with the new producer packs that launched with GarageBand this summer.

Aside from optimizations for the M1 Pro and M1 Max chips, Apple’s NLE gained a couple of interesting features.

Videos recorded in Cinematic mode on the new iPhone 13 lineup can be edited with Final Cut Pro and Motion. Giving editors the ability to adjust the depth effect of any shot and use keyframes to change it over time. By clicking on a face or object in the viewer, editors can add or delete focus points.

FCP and Motion now got a 2D tracker built in, which for many editors is a dream come true. The neat tracker implementation offers point cloud tracking and machine learning to lock on to objects in the frame. Titles, graphics, generators, and videoclips then move, rotate and scale with the tracked object. Effects can also be tracked by using their shape mask feature. This way, tracking color correction to a face or pixelating a license plate is now possible. When tracking a flat surface and using the distort tool, it’s possible to do things like sticking a logo to a wall or replacing a TV screen. Obviously dedicated planar trackers do a better job, but it’s nice to be able to quickly track something without leaving the timeline.

Aside from numerous bug fixes, there is also a new effect called “neon”, which is basically an advanced glow filter. Under the hood, FCP gained support for 3rd party apps being able to get XML and media files out of FCP – in a neat bundle. This opens up more possibilities for apps and services like frame.io or Kyno to interface with the editing program.

As always with Apple pro software updates for Apple Final Cut Pro and Logic Pro are more of an evolution than a revolution. Things were added, improved, and fixed. This makes an already stable and reliable NLE even better. Nevertheless, there are many features that FCP editors, including myself, are missing in this update and are hoping to see.

Please share your thoughts in the comments below. It’s no secret that I love FCP and like to share my knowledge with other users. So, if you have a request for a tutorial or quick tip, please put that in the comments as well.