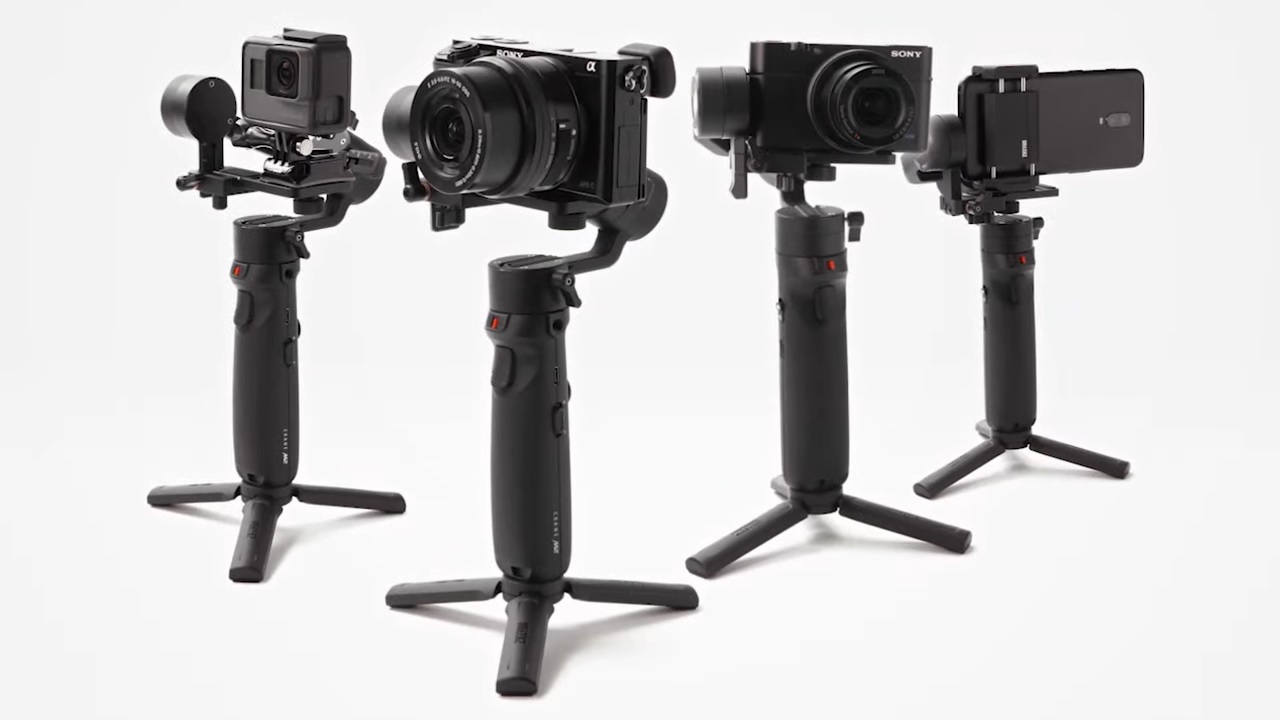 The Zhiyun Crane-M2 was just announced and it is smaller than most of its competitors. It weighs 1.1 lbs (500g) and can carry compact cameras, light mirrorless cameras, mobile phones, and action cameras weighing up to 1.58 lbs (720 g). It features enhanced camera control via Wi-fi and Bluetooth, new stabilizing modes, and up to 7 hours battery life. Available now for $269. 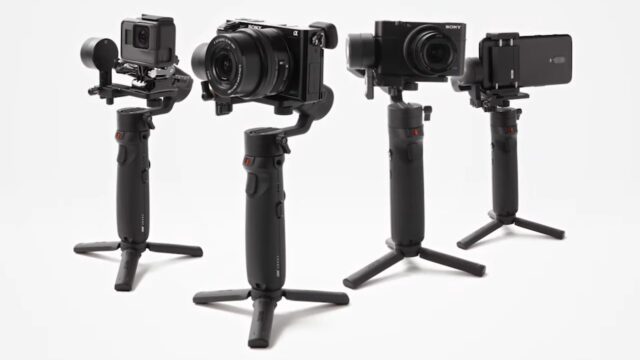 Zhiyun-Tech is a Chinese company specializing in electronic gimbal stabilizers. They have been on the market for a few years already and their CRANE gimbals have gotten quite popular.

In general, despite their overuse in many fields of filmmaking, the popularity of gimbals has been steadily increasing over the past years and manufacturers are trying to offer products for all weight classes of cameras. DJI introduced their compact gimbal for mirrorless cameras last week with the Ronin-SC. Gudsen introduced the MOZA Aircross 2 for lighter payloads during this year’s NAB.

The Zhiyun CRANE-M2 is truly a compact tool – the dimensions of the gimbal are 10.5 x 2.7 x 5.4″ (267 x 69 x 138mm) and it weighs 1.1 lbs (500g). It works with multiple devices including compact cameras, light mirrorless cameras, mobile phones, and action cameras – maximum payload is 1.58 lbs (720 g). Please mind, that a dedicated accessory is required for mounting mobile phones or action cameras.

The gimbal has a new quick release plate which makes it much easier to remove the camera from the stabilizer and remount it again. The scale mark and positioning memory lock mean that balancing only takes seconds. The axes can be locked in position by one button and prevented from swinging around during storage, which lets the CRANE-M2 fold up and lock quickly to fit into a backpack or even a pocket. 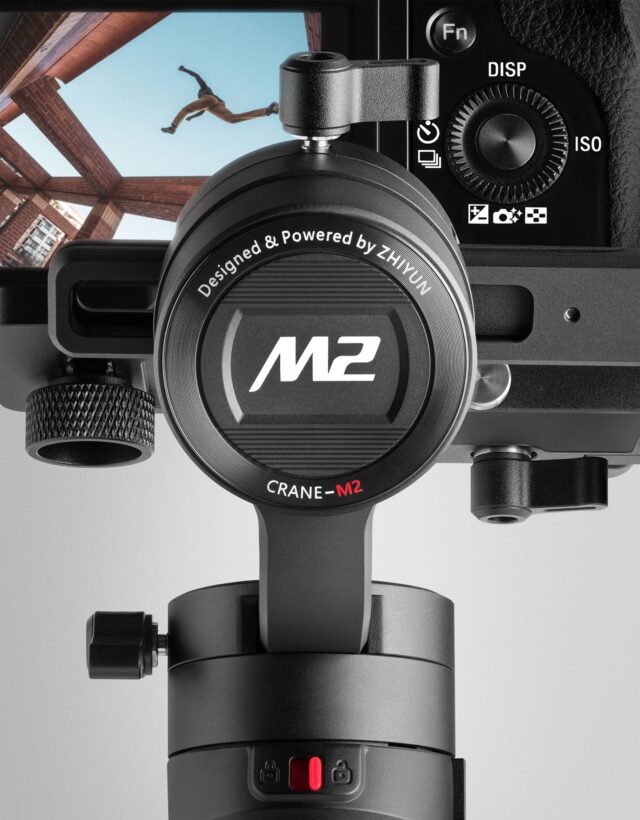 The handle provides easy access to all the controls. For example with a single push of the slider on the handle, users can operate the camera’s zoom. There is a bright OLED display which shows gimbal mode, Bluetooth and Wi-fi status, battery level and other important parameters. 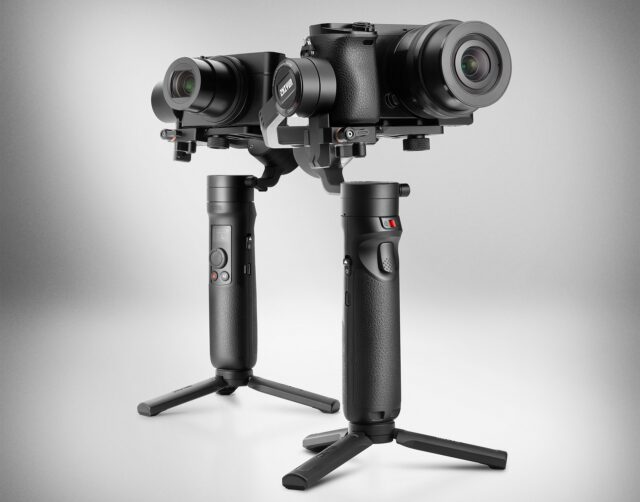 CRANE-M2’s Wi-fi and Bluetooth features provide seamless wireless camera control through the gimbal handle and Zhiyun’s ZY PLAY app. Zhiyun-Tech published a list of cameras which are currently supported for the wireless controls:

For smartphones, Zhiyun only states that most popular smartphones on the market are supported. The ZY PLAY app brings more additional features like remote control, time-lapse, panorama and vertigo shot. 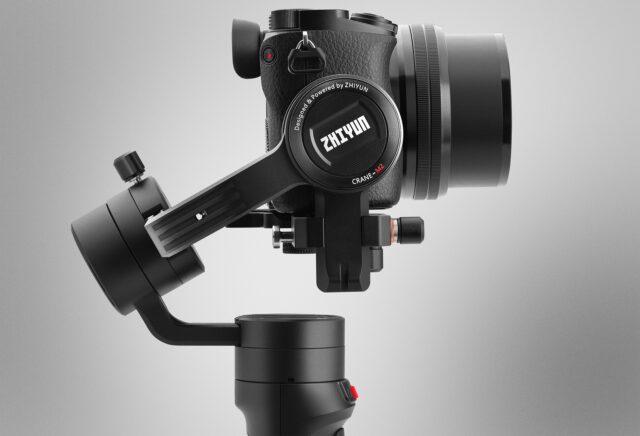 The Zhiyun Crane-M2 also features ¼-inch threaded holes to attach audio, lighting and monitoring equipment. The battery runtime is up to 7 hours. CRANE-M2 itself can charge cameras, phones and other devices, and it can also be charged from a power bank or other source.

It will be interesting to see which setups can work with such a small gimbal – to look for its limits. When I briefly checked the FUJIFILM X-T3’s weight, which (according to B&H, body with battery and memory card) is 1.19 lb (539 g). I think it might even be possible to mount this camera with a lightweight prime lens. I am curious to see.

We will update this article with buy links from our sponsors B&H and CVP when those become available.

What do you think of the new Zhiyun Crane-M2? Do you need a compact gimbal like this? Which camera would you use it with? Let us know in the comments below the article.