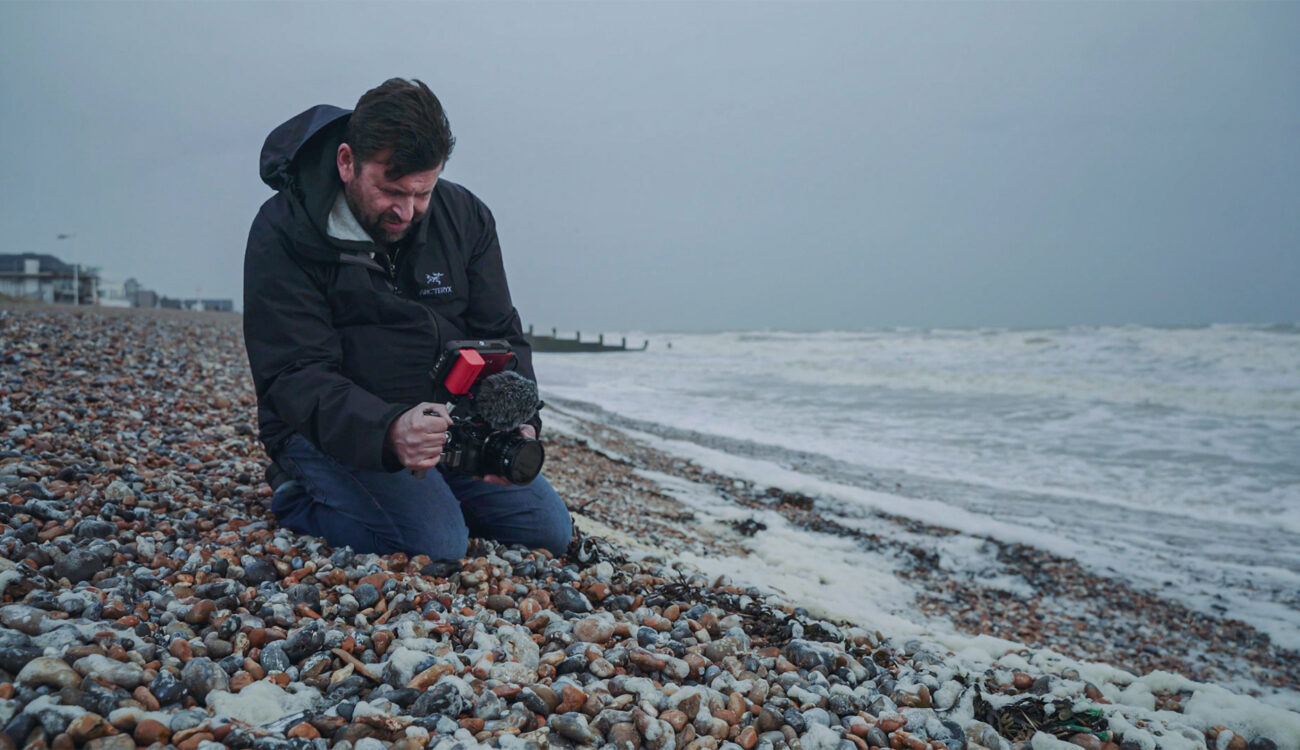 Problem-solving is at the heart of filmmaking. But while the unexpected is always just around the corner at any shoot, a marked spirit of adaptation is even more vital for solo shooters and small crews having to deal with day exteriors, miserable weather, and a ticking clock.

As an outdoor filmmaker, I can’t recall how many times I found myself in the mountains facing lighting conditions that were exactly the opposite of what I had wished for. And still, despite weeks or even months of preparation, you always need to be ready to take a detour from the original creative plan to make the best out of what nature has to offer. Put simply, you just cannot afford to get back home empty-handed.

That’s precisely the topic of the Story and Narrative module of Philip Bloom’s Filmmaking for Photographers course on MZed. In this insightful lesson, Philip takes on the challenge of shooting a real estate video for the perfect summer resort, a beautiful beach house in Southern England, in the middle of the winter. That’s a demanding task, to say the least.

With a career spanning more than 3 decades, Philip Bloom knows the importance of proper pre-production. Therefore, since he didn’t have the luxury of location scouting for this project, he did his homework in advance. He carefully looked at pictures of the location online, put down a detailed shot list, and imagined the warm, summer tones he was looking for. However, as it often happens in real-world scenarios, the reality did not match his expectations.

First, the weather forecast for the 3-day shooting window wasn’t very promising, with predicted overcast skies and fierce gusts of wind. Moreover, as he first walked into the house, he soon realized that the available mixed lighting wasn’t very flattering. To top this off, the model he involved to make the property look more lively was only available for a little over 24 hours between Day 1 and Day 2.

The importance of multiple backup plans

Clearly, the only way out of such a testing situation resides in your ability to think outside the box, let go of your creative ego, and make adjustments as you go. And the way Philip slaloms between the different issues is simply brilliant.

To start off, rather than hoping for the impossible, he develops multiple backup plans. His first strategy consists in letting the camera roll even during bad weather hours while making the best out of the brief sunshine slots.

In the end, this approach resulted in two very different edits to choose from: one emulating hot summertime, and the other showcasing the harsh shooting conditions. While the former seems to be the most appealing (and logical) option to attract would-be renters for the property, Philip demonstrates how a little bit of humor can turn a probable failure into a potential success (note the copywriting trick below, which gives a twist to the ending of the “bad weather” edit).

Moreover, Philip made sure to bring home some empty interior shots of the property. Although these traditional real estate views are far from Philip’s creative intent and assignment, they can still be a relevant asset for the client. Finally, as a last resort, Philip suggests building the possibility of a re-shoot into the budget and contract of every gig involving outdoor exteriors.

According to Philip’s original plan, the model’s role was that of connecting the beach house and the natural world, thus emphasizing the advantageous position of the property. However, while recreating a golden hour look indoors can easily be done with a basic lighting kit and some CTO gel, you cannot say the same about faking sunshine on a beach hit by strong winds and sandstorms. Hence, Philip had to find a visual alternative to shooting on the shoreline.

In the end, he still managed to convey a naturalistic feel thanks to wise camera placement. Indeed, in scenes in which the landscape is clearly visible outside the windows, Philip ensured to crop out elements, such as branches and trees, that could blatantly reveal the strong outside winds. A simple, effective workaround.

Another ingenious tweak to the original shot list that helped Philip achieve his goal against all odds was his decision to add some night interior scenes. Indeed, he could use candlelight to create a warm, cozy environment inside, while bad weather was hiding in the dark.

More from Philip Bloom on MZed

Although Philip Bloom’s Filmmaking for Photographers course is aimed at photographers moving their first steps into the world of motion picture, it can still be a valuable resource for established filmmakers.

However, if you’re looking for something even more suitable for aspiring filmmakers, make sure to check out Philip’s Cinematic Masterclass on MZed, an extensive 9-hour journey through the craft of independent filmmaking.

What else do you get with MZed Pro?

As an MZed Pro member, you also get access to over 300 hours of filmmaking education, plus we’re constantly adding more courses (several in production right now).

What’s your approach to shooting day exteriors? Do you have any tips to avoid getting back home empty-handed? Share your experience in the comments below!