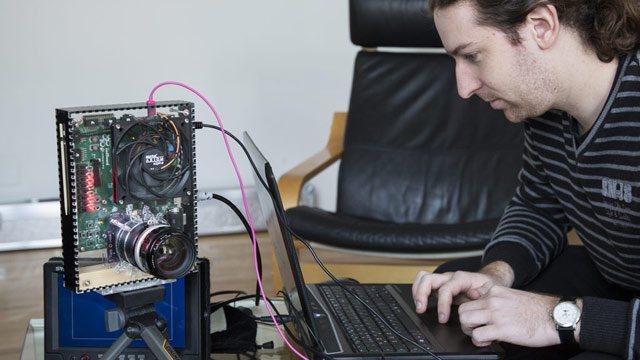 The development of the Apertus° Axiom open-source camera is advancing. Another milestone in Alpha development was reached yesterday when the team successfully unlocked the hdmi output of the camera.

Sebastian Pichelhofer, project leader at Apertus° stopped by at our office and presented his camera Prototype that is scheduled to go into crowd funding later this year.

The “camera body”, as you can see is still in its Alpha stage, housed in transparent plastic and connected to a PC as an input device.
For the first time since the prototype was manufactured late last year the team managed to output and display a “deep color” (12 bit) hdmi signal to a monitor (and even to an Atomos Samurai), meaning it is the first time they are able to record moving images and bringing them closer to a working device. If you can’t remember what the Apertus camera is planned to be here’s the full list:

We hope this project is going to be successful and there won’t be too many obstacles ahead so crowdfunding can really start later this year.