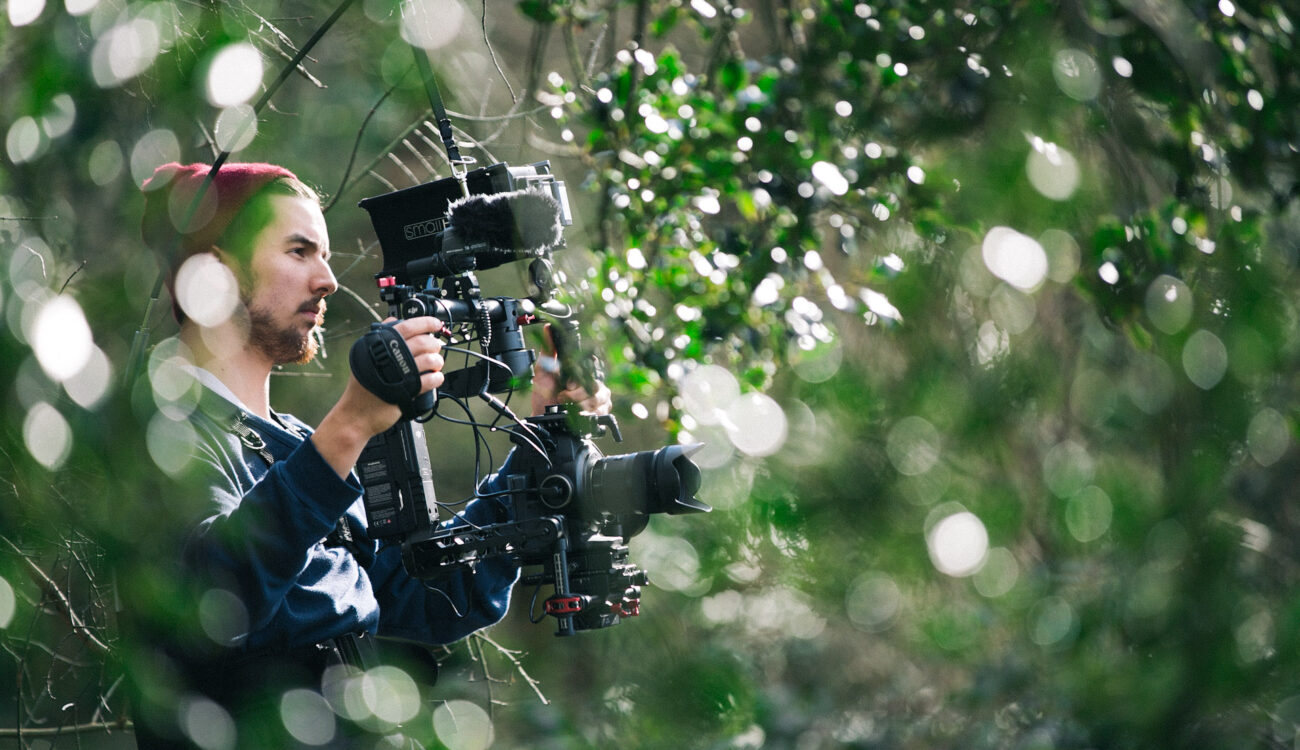 Atlas Camera Support is designed to relieve the weight of your camera setup. I tested it out alongside my DJI Ronin to see how well it performs with a heavy gimbal stabilizer.

Anyone who owns a DJI Ronin will tell you just how heavy it can be, I use mine alongside my Canon C100 and despite it being a relatively light camera, you won’t last long with it hanging off the beastie Ronin. The Ronin itself is heavy; at 4.2kg it’s nearly 3 times the weight of a Movi M10.

I was therefore very intrigued when I stumbled across the Atlas Camera Support. A system that relieves the weight of a camera setup via flexible rods and vest.

The Atlas Camera Support is available in both single and dual rod setups, the latter spreads weight evenly over both shoulders and across your back, it no doubt prolongs your ability to shoot long takes, but comes at a cost.

I was sent both systems to try out, the camera support is designed to work with any camera setup in whatever rig you choose but I wanted to test it specifically with my Ronin to see how it well it works with a gimbal stabilizer. If your shot is a simple linear track, you’ll benefit from the added support and balance the 2 rod system provides, but as soon as you want variety in height and direction of your gimbal it will limit your movement.

You have very little twist function with a 2 rod system.

For these reasons, I did no further testing with a 2-rod system, solely using the Atlas Camera Support single rod setup.

The weight of your setup will determine what package you choose. Atlas provides quite a few options, three stages (lightweight, middleweight and heavyweight) with three further weight options per stage.

Use a few cameras and not sure which one to pick? Not to worry, Atlas offer combo setups also, simply pick you payload range and you’ll get sent out a few different strength rods. I was sent over quite a few to try out, but ended up using one rod almost exclusively, which to my knowledge was the standard Middleweight rod. I did hand the Atlas kit over to a regular F55 shooter to take a look at from a heavyweight point of view, and they did express a concern for the relatively little amount of metal you’re left with to take the weight of the camera setup.

I agree it does look thin here, (all medium to heavweight rods were the same in this regard) but I haven’t experienced any problems with it.

The Atlas does a fantastic job in relieving weight from your setup.

Whilst it’s not recommended to do so I did experiment for review purposes, and yes you can let go of your stabilizer completely and the Atlas will take all of the weight.

It’s actually quite tempting to just let the Atlas do all the work, but what you’ll find is that your footage will bounce, it’s important to hold the Ronin and support a small percentage of the weight whilst operating; it will affect your footage if you simply let it take the brunt.

At a guess, I’d say I could operate the Ronin and C100 setup for around 2 minutes before fatigue sets in, with the Atlas this figure is blown away. I can run over half an hour without experiencing major discomfort.

I did consider a quick side by side video comparing timings holding the Ronin with and without the Atlas, but it would’ve consisted of me standing in front of camera for an awkwardly long, boring amount of time proving the point. Take my word; it’ll add tens of minutes to your takes.

You’ll eventually feel discomfort in your back, as the vest alleviates the weight from your arms and over your shoulders. You’ll find fatigue much more progressive here though, rather than the simple ‘give way’ feeling you get when your arms have had enough. The vest is universal fitting for all Atlas systems, regardless of rod numbers or strength (this makes it easy to change your rod strengths with future camera purchases).

It has two slots on the rear, for single rod setups simply pick your favourite shoulder to arc from.

You attach a Velcro ring pull to both the rod and gimbal, and a snap hook simply links the two together. At first, the support isn’t the easiest bit of kit to setup on your own. Reaching up & back to a rod hanging somewhere over your head can feel like the predicament you sometimes get in when trying to put on a jacket with an inside out sleeve.

You’ll get used to it however, there is a knack to it.

Any regular users of the Ronin or like stabilizers I’m sure will have migrated to chest height setup when placing the device back on a stand. This will really help you with hooking up your Atlas Camera Support and save a lot of time and man power. Since being sent the support for review, Atlas has released a great looking quick release system for mounting the rod to your camera

So a dual rod setup is too restrictive, but how does a single rod setup perform with the Ronin? Well, you do lose some freedom, the fact that you’re connected to the gimbal via an over hanging rod makes it more difficult to do more dramatic height shifts during takes, it also disables the ability to pass the Ronin onto another operator. Twist is limited, and you have to be careful in height changes to ensure the Atlas doesn’t take the weight over completely and affect your footage.

However the weight relief is a huge advantage, the ability to run long (shoulder rig long) takes means you can shoot with your Ronin unlike before.

I connected the single rod Atlas to the top handle of my Ronin, and this still gives me a fair amount of twist action and I was also able to get moderate height shifts.

It’s a case of finding the right balance with use of the support, there’s shots that simply won’t be possible with it attached. You’ll probably find yourself re thinking shots of how it can be used however; it does that much for you.

Here’s a comparison of two systems both ranging in the 10-14lbs category (4-6kg):

It’s fair to say that the Easyrig is a more substantial product. It has side struts that provide a more stable support that is no doubt much better for your back (the Atlas can dig into you over time).

Whether the Easyrig justifies a price tag over 3 times more than the Atlas however remains to the seen.

For the Scan Readers

For Gimbal stabilizer use, a single rod Atlas must be considered, as dual rod setups are too limiting. Buying a DJI Ronin created a new problem for me, the ability to sustain long stabilized shots, the Atlas Camera Support offers a solution, it single handily solves all the grief my poor twiggy arms have been cursing me for as of late. Whilst it’s not suitable for all gimbal shots, and its appearance certainly raises an eyebrow or two when in the field, I simply won’t go on a Ronin shoot without this bit of kit anymore.

A lot of people will have bought the Ronin to save costs on a MoVi setup, and a lot of those operators will know the pain I talk of when discussing its weight. Atlas offer a very good solution to this and it won’t break the bank.