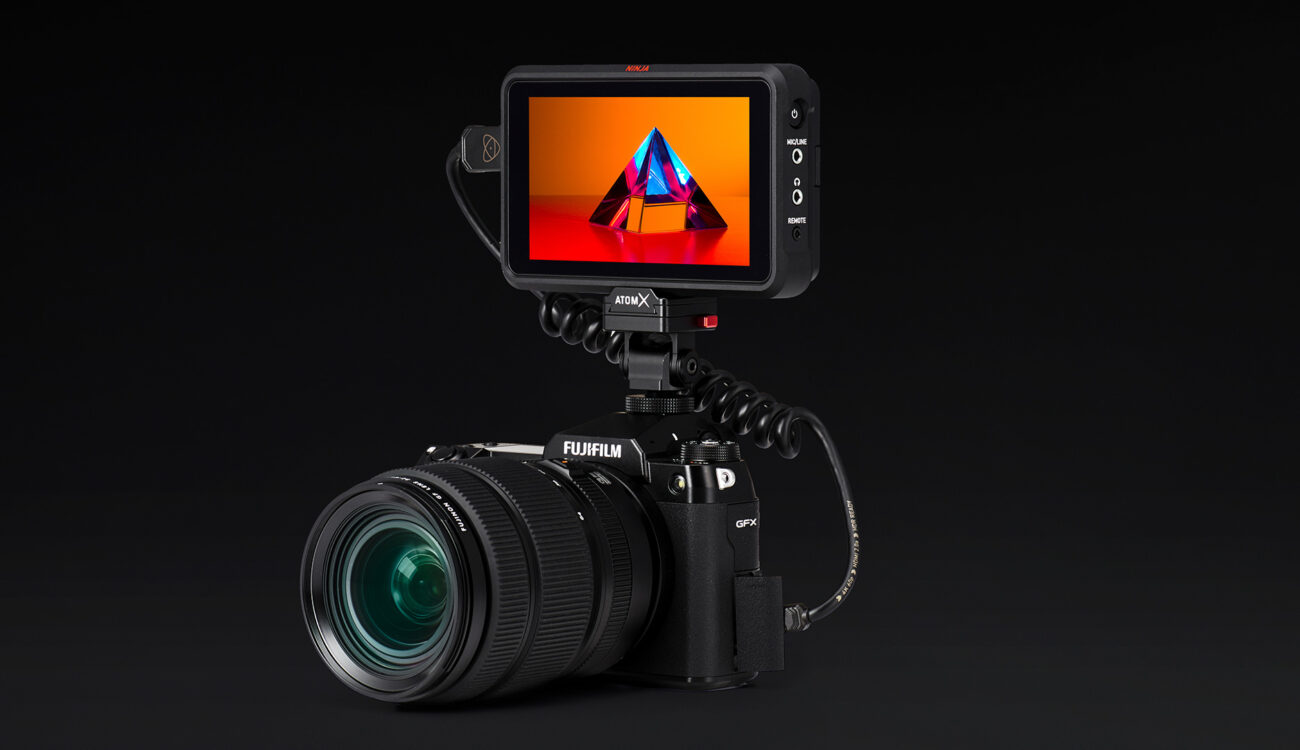 In the wake of FUJIFILM’s announcement of the GFX100S camera comes another very interesting disclosure: Atomos reveiled that their Ninja V will be able to record ProRes RAW from FUJIFILM’s GFX100S large format camera.

The Atomos Ninja V is an accurate 5″ 1000nit HDR high-brightness monitor/recorder. It already supports recording 4K ProRes via its HDMI input and ProRes RAW from a variety of cameras. The Sony a7SII, the Panasonic Lumix SH1, the SIGMA fp, and the FUJIFILM GFX100 (the GFX100S’ big sibling) – just to name a few.

When combined with the new FUJIFILM GFX100S, it will be able to record Apple ProRes RAW over HDMI. The Ninja V will record up to 4Kp30 12-bit ProRes RAW video. It’s downsampled from the huge GFX100S’ 102MP resolution 43.8 x 32.9mm BSI CMOS sensor.

Unlike with other cameras, FUJIFILM will support White Balance and ISO in an upcoming firmware update during Summer, 2021. The camera will then pass on all the metadata needed to allow for the maximum amount of flexibility in post.

The Benefits of ProRes RAW

Atomos’ Ninja V being able to record ProRes RAW from the FUJIFILM GFX100S, combines the visual and workflow benefits of RAW video with the incredible real-time performance of ProRes. This will give filmmakers enormous latitude when adjusting the look of their images and extending brightness and shadow detail, making it ideal for HDR workflows. Also, both ProRes RAW and the higher bandwidth, less compressed ProRes RAW HQ will be supported. Manageable file sizes speed up and simplify file transfer, media management and archiving. ProRes RAW is fully supported in Final Cut Pro, Adobe Premiere Pro and Avid Media Composer, along with some more.

Exciting times — being able to record large format video with a relatively cheap package is very tempting. With the continuing success of ProRes RAW, I just hope that Blackmagic Design will finally bring itself to support the codec in its DaVinci Resolve software.

Are you excited about the prospect of shooting ProRes RAW in large format? Do you use the GFX100 already? Are you thinking of buying the GFX100S and combining it with an Atomos Ninja V? Let us know in the comments!