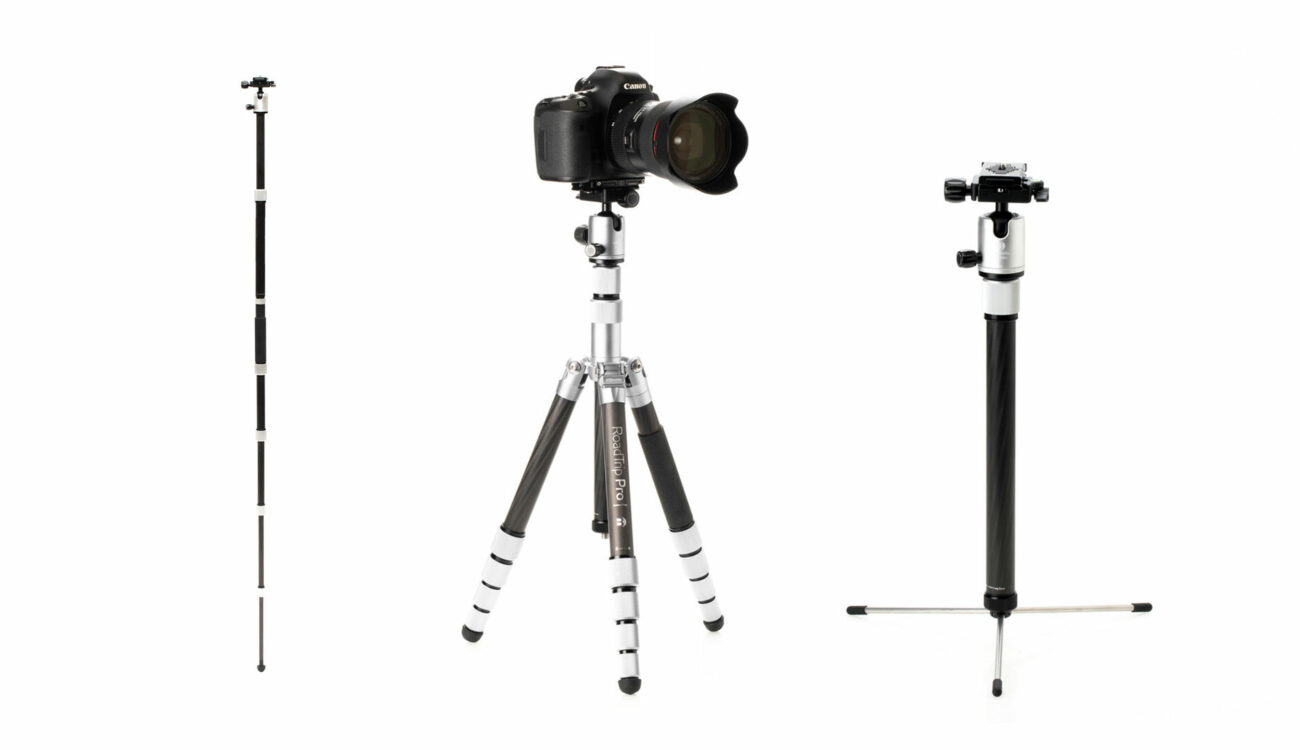 Benro recently released a new travel tripod for content creators on the go: the Benro MeFOTO RoadTrip PRO. This six-in-one tripod doubles as a monopod, boom pole, selfie stick, high hat, and it even has a built-in tabletop tripod. Available in either aluminum or carbon fiber, the MeFOTO RoadTrip PRO is only 15.16in/39cm long when reverse folded. Still, it has a maximum height of 60.03in/152.5cm with a maximum payload capacity of 17.63lbs/8.0kg. So let’s take a closer look at it!

If you’re often on the road, a travel tripod is a must-have. Indeed, having a compact and lightweight tripod at your disposal could make the difference between bringing sticks with you or not.

Numerous offerings from various companies are already on the market, like the Peak Design Travel Tripod, the Manfrotto Befree 3-Way Live Advanced, or the iFootage Gazelle Uprise TC6 that I’ve already reviewed. Benro already launched the MeFOTO RoadTrip last year, but this time, they are back with the PRO version that is much more versatile.

The Benro MeFOTO RoadTrip PRO is one of the most compact travel tripods currently available, with a reverse-folded height of only 15.16/39cm.

As a direct comparison, the Peak Design Travel Tripod, which can be considered a benchmark, is 15.35/39.4cm high. Furthermore, in terms of length and width, the MeFOTO RoadTrip PRO is 3.14in/8.0cm in both axes.

As you can maybe tell, it’ll be fairly easy to bring this Benro travel tripod with you on the road or strap it to the side of your camera bag. However, it can go to a reasonable height; if you extend all the legs and the center column, it can reach 62.2in/158.0cm, which is 6cm higher than the Peak Design offering.

No matter if you’re shooting stills or video, the MeFOTO RoadTrip PRO should be able to support most camera packages with a maximum payload capacity of 17.63lb/8.0kg.

To extend the 5-leg sections of the Benro MeFOTO RoadTrip PRO, the company went for a twist-lock mechanism. As a filmmaker, I usually prefer flip locks for safety and peace of mind, but the twist-lock ones are usually much faster. Also, for more flexibility, you can adjust the angle of each leg independently at three different angles.

The legs feature rubber feet, and you can unthread them to replace them with the included spiked feet for more stability outdoors. Within the tripod’s removable feet are a 3/8″-16 to 1/4″-20 adapter stud and an accompanying straight screwdriver.

As I already mentioned, this travel tripod features a two-section center column, which is removable and reversible for low-angle shots. On top of the center column, the MeFOTO RoadTrip PRO comes with a ball head – you can, of course, replace it with your favorite flat-base tripod head – which is Arca-Swiss compatible.

The Arca-style quick-release plate that comes with the tripod has an interesting design. Indeed, mount the plate 90°, and your phone mount is ready to go. The spring-loaded clip secures your mobile device in place, and it even has a cold shoe to attach accessories. That’s very smart if you want to take selfies or vlog with your smartphone.

Six in one travel tripod

The Benro MeFOTO RoadTrip PRO has plenty of tricks up its sleeve. First, it’s a travel tripod, but it becomes a monopod if you remove the center column and the padded leg.

Next, you can combine both to create a selfie stick if you detach the leg tube and phone holder QR plate.

Last but not least, inside the center column, you’ll find an internal small leg set. You can use these legs in conjunction with the center column, leg, and head to create multiple configurations, like a tabletop tripod, high hat, and so on.

The MeFOTO RoadTrip PRO is available in three colors – black, pacific blue, and silver – in either aluminum or carbon fiber version. Both versions take the same amount of weight, but the aluminum version is heavier at 3.61lb/1.64kg compared to 3.02lb/1.37kg for the carbon fiber one.

All versions and colors of the Benro MeFOTO RoadTrip PRO are available now. The aluminum version retails for $249.95, and the carbon fiber version is $299.95. The tripod comes with the ball head and a carrying case with a shoulder strap. As a direct comparison, the Peak Design Travel Tripod starts at $349.95 for the aluminum version without a bag and with a limited tripod head.

What do you think about Benro’s latest travel tripod? Do you already have a compact and lightweight tripod in your kit? Don’t hesitate to let us know in the comments below!