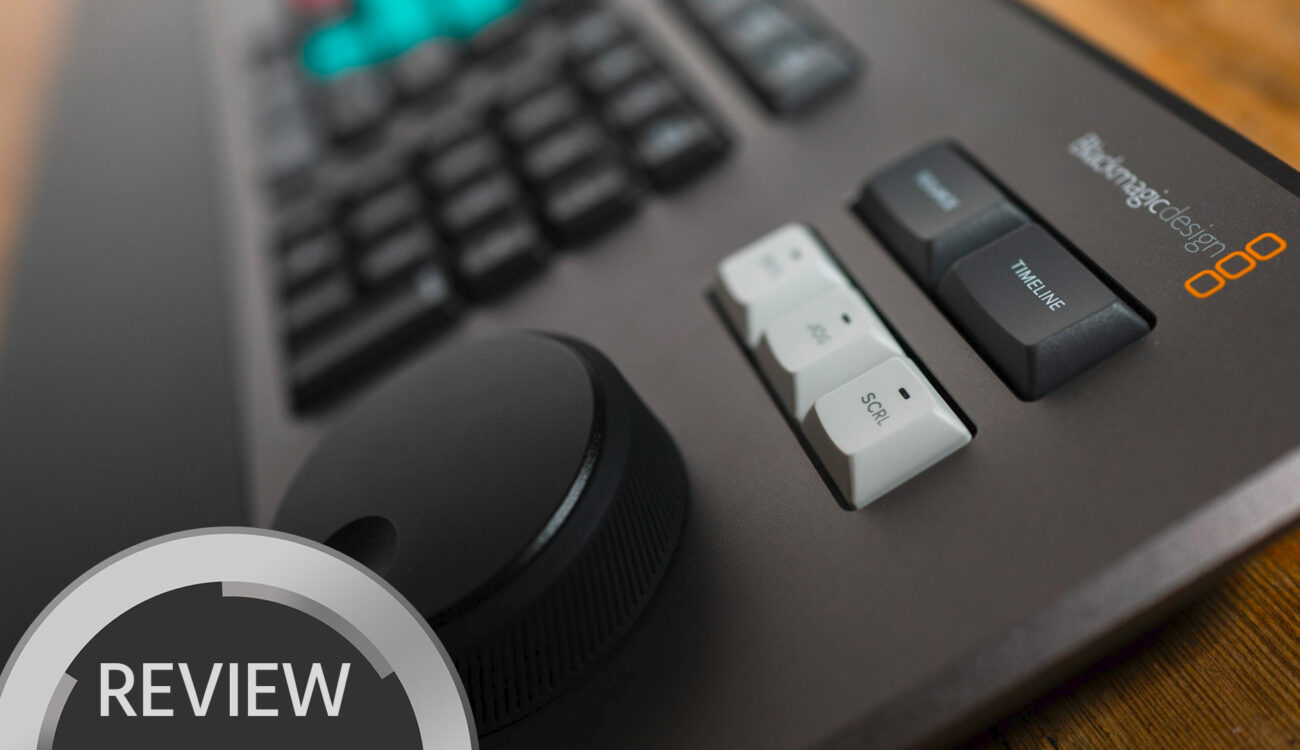 NAB 2019 saw the somewhat surprising introduction of the Blackmagic Design Editor Keyboard. A $995.00 keyboard for video editing, containing specialized keys and a multi-mode jog wheel, with functions that are hard to even imagine, much less assign to keyboard shortcuts, a mouse, or any combination of third-party control panels. We took a closer look at this keyboard and put it through its paces. Here’s our take. 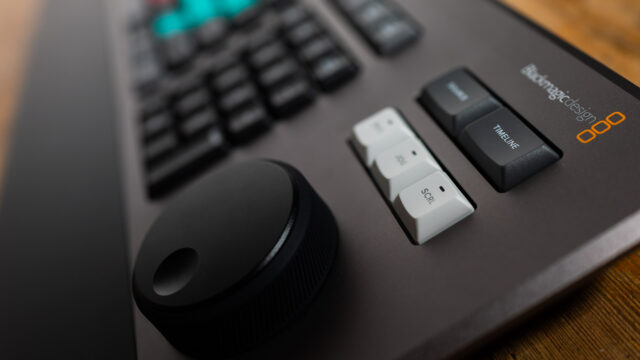 Blackmagic has been offering their full-sized Advanced Panel for grading in DaVinci Resolve for years now and these have become standard inventory at grading houses all over the industry. But it was only a few years ago that Blackmagic started taking into account the needs of smaller production houses and individual filmmakers or colorists which couldn’t afford the $30,000 Advanced Panel, as well as the rather large grading suite to put it in, by offering the Mini and Micro Panels. However most major versions of Resolve since version 14, seemingly building on the software’s almost unchallenged dominance in the color grading realm, have been trying to improve on DaVinci Resolve’s usefulness to editors, VFX artists and sound editors alike, brushing up on the editing side of things by adding loads of features already present in other NLEs and integrating Fairlight and Fusion into Resolve without any additional cost upgrading. Consequently, versions 15 and 16 have, at least across Youtube and the Blogospheres, seen people announcing their switch to Resolve in troves, either from Adobe Premiere or Final Cut (arguably not as much from Avid though).

So is this new keyboard part of the same strategic push by Blackmagic Design to further differentiate and distinguish DaVinci Resolve as a full-featured editing suite for editors or teams without the dreaded, time-wasting round trips? And who would actually seriously buy a keyboard for a thousand dollars? We will try and return to these questions a bit later on. 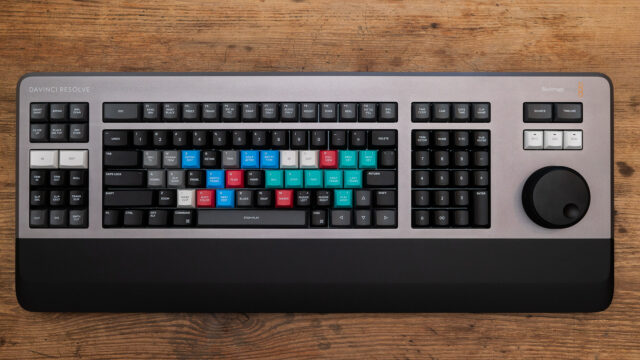 Let me start out by saying that even if this keyboard was twice the price, the build quality would still feel outstanding for the price. It feels like the Blackmagic Design Editor Keyboard could survive bouncing around a case or rack for years and maybe even survive a drop – but don’t quote me on that. At the core of the keyboard is a US-style QWERTY setup of keys with the arrow keys integrated into the main block of keys and the “Home” key integrated into the Num-block. Function groups are color-coded, although the keys for those groups are not always grouped together. To the left of the QWERTY-block is a set of 17 special function editing keys, to the right of the Num-block you’ll find 5 more keys and the main event of the show: the jog wheel. The key switches themselves seem to be pretty premium mechanical ones, like those found in high-end gaming keyboards and feature a nice bounce and satisfying click – just don’t expect typing on this keyboard to be quiet. 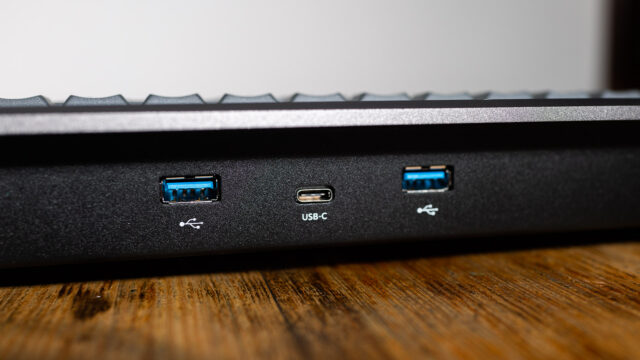 The panel surrounding the keys is metal, with a subtle grey coating and feels like you could drop a hammer on it. The handrest is plastic, coated with soft-touch rubber, that feels very comforting if not cushy even for extended use. The backside houses the main connection, a USB-C port that will also power the keyboard, as well as the other two USB-A ports to the sides of it. The bottom plate is plastic and has the standard rubber stoppers, two risers and four mounting connections for screws. 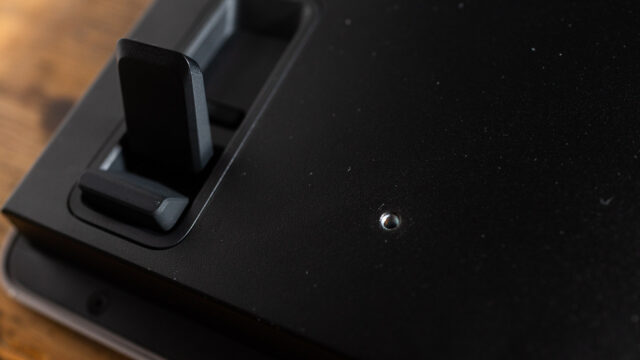 Star of the Show: the Jog-Wheel 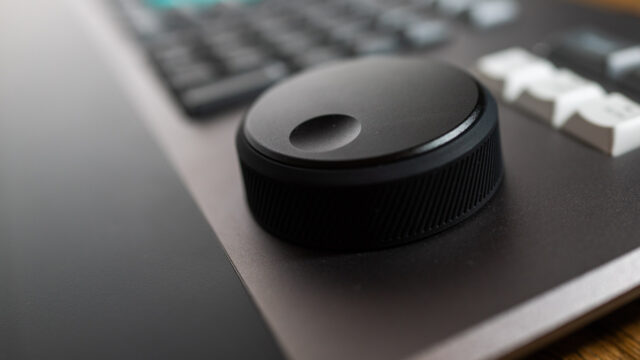 Let me just say this: the Blackmagic Design Editor Keyboard’s wheel is just a pleasure to use. I have used the attainable competitors like Tangent’s control panels, Loudedeck+ and the Contour Shuttle wheels. However, this jog wheel is in a class totally its own in this price range and will probably hold its own in any. Its top side is metal, with the traditional indentation for a finger to turn the wheel, while its sides are made of textured rubber. The wheel as a whole can be clicked and the three keys above it will control its function to either shuttle, jog or scroll across the timeline. To be clear: this will not only change how the software reacts to the wheels input, it will change how the hardware reacts, with the wheel just turning until you physically stop it in the scroll- or jog-mode, but introducing two hard-stop reference positions at three and nine o’clock with nice resistance in shuttle-mode. This is simplifying the way most traditional jog wheels worked, where you had the inner circle be the non-resistive part and an outer, second ring for the resistive shuttle-function. The wheel itself is nicely weighted, feels substantial and has fantastic balancing for just the right amount of inertia. A decisive flick will keep it turning for seconds on end, while one finger on the rubber sides will make it stop immediately.

What Normal Keyboards Can’t Do 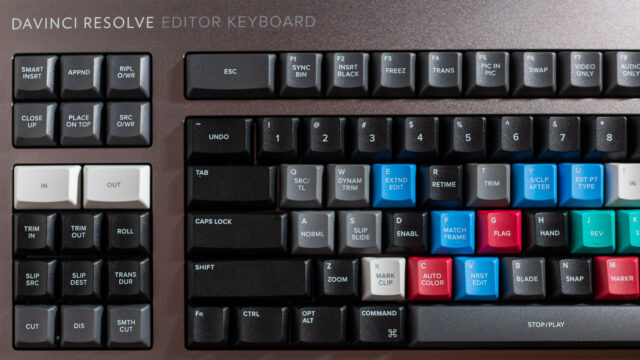 Now gushing about the jog wheel aside, a thousand dollar keyboard should provide tangible improvements over the way normal keyboards work: improvements that make you a faster, more efficient editor, with all the improvements that might entail for your particular working situation. Let’s examine the categories in which the keyboard tries to deliver on that:

Obviously, the second, and above all, the third category are central to the Blackmagic Design Editor Keyboard’s value proposition. Personally, my most used action here was trimming on the cut page. It works by just moving the play head over the clip you want to trim, then with your left hand holding down “Trim In” or “Trim Out” and starting to move the jog wheel. This will then make a two-up display of the bordering clip and the one that is being edited appear in the viewer, as well as two rows of film strips, giving you reference as to how many frames you trimmed into the clip the playhead is over. The trim will automatically make everything after it ripple and that is that. You are free to move on to the next edit. While people might argue that an expert level shortcut user might be just as fast, it is doubtful if she might be just as fast with the level of precision offered here. 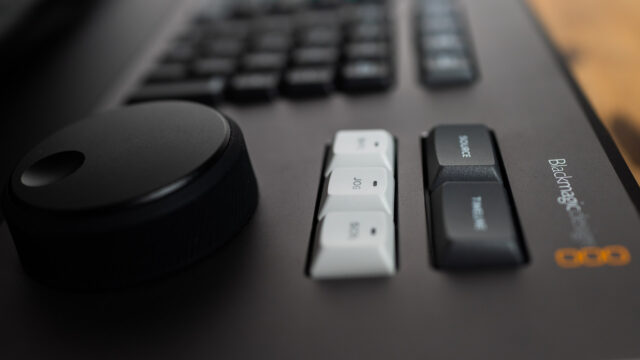 The slip keys work in a similar fashion, just for the Slip operation, and the transition duration will allow you to change the transition the playhead is closest to with the jog wheel, or do a roll on the clip the playhead is over. Overall, this is probably the best, most unique part of the experience the Blackmagic Design Editor Keyboard offers and one of the smoothest, most enjoyable trimming experiences around. 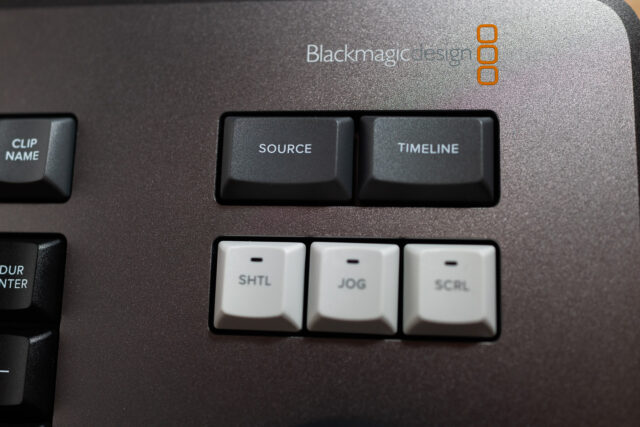 That said, those unique two-hand actions utilizing keypresses in combination with the wheel are mostly concentrated around six keys on the left-hand side and the respective editing operations. And while these may be important operations, the Blackmagic Design Editor Keyboard does present a rather opinionated take on how people edit, which to me seems to be geared towards getting a quick-turnaround first cut in an ENG environment. This might also explain the presence of keys, that I for one, wouldn’t see myself using in my work ever, like “Smooth Cut” (a transition meant to hide jump cuts by dissolving from one clip to the next) or “Close up” (basically automatic punch-in). So if that is not your usage profile, you might get a pretty expensive keyboard for not a lot of benefit. 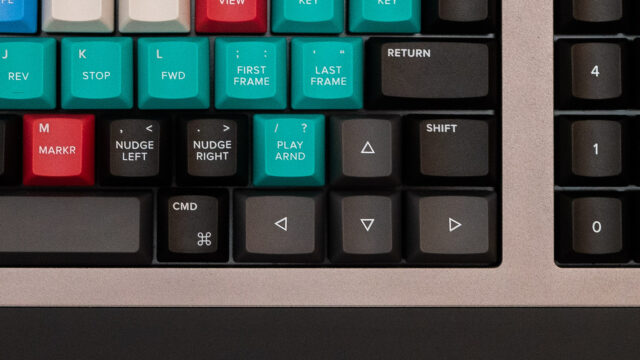 Then there are the placement of the arrow keys, inside the QWERTY-block, which I couldn’t warm up to even after a month of use, the missing “End” key, with the “Home” key being present nonetheless, and maybe the most serious concern of all: the inconsistencies between the Cut and the Edit page. Make no mistake, the Blackmagic Design Editor Keyboard feels most at home on the Cut page and there are even keys that will work on one page but not on the other (“Trans”, “Sync-Bin”, “Trim Editor” and “Pic in Pic” only work on the Cut page, while “Hand” only works on the Edit page. On the Fusion or Fairlight pages even the Trim functions won’t work, and the Color page will just allow you to jog through your clip.

So Who Is It For Then? This brings me back to the questions asked at the beginning of this review. The Blackmagic Design Editor Keyboard does seem to be part of Blackmagic’s commendable efforts to expand Resolve’s user profile and also effectiveness per profile: Editor, VFX-artist, Colorist, Sound Editor, no matter what you actually do Resolve has you covered pretty extensively. But the Cut page in particular, and the Blackmagic Design Editor Keyboard as its hardware incarnation are a pretty divisive concept. Are cutting and editing really different activities, in that they require different user interfaces? Do you have a team where it might make sense to split those activities among different people? Do you wrangle so much footage, that the specialized trimming functions will make you that much faster, that they tangibly benefit your business? The answers to these questions will probably determine how useful the Blackmagic Design Editor Keyboard will be for you – that is, if you are fine with using JUST DaVinci Resolve for the whole process as the keyboard will just function like any other keyboard in any other NLE.

There is something to be said for the innovative concept, immense build quality and the beautiful concentration on the craft of editing, which a keyboard like this is able to support and I commend Blackmagic for being bold enough to dream it up and make it. It deserves a second version to iron out all the weird quirks and make it a product in itself, rather than an accessory to the Cut page. It will not become part of my desk setup just yet, but with some fixes to the minor quirks mentioned and some usefulness outside Resolve, it really just might.

Would you spend $995.00 on a keyboard specialized in editing? Are you excited to try the Blackmagic Design Editor Keyboard? Let us know in the comments!

If you want more reviews like this one, please support cinema5D by buying from one of our partners B&H or CVP below! It doesn’t cost you a cent more but helps us continue what we do best.