cinema5D invited Senior Blackmagic Design trainer Simon Hall to give a short workshop covering basics of editing in DaVinci Resolve 16. He explained key features of Media and Edit pages of Resolve and briefly touched the Fusion and Deliver pages as well. 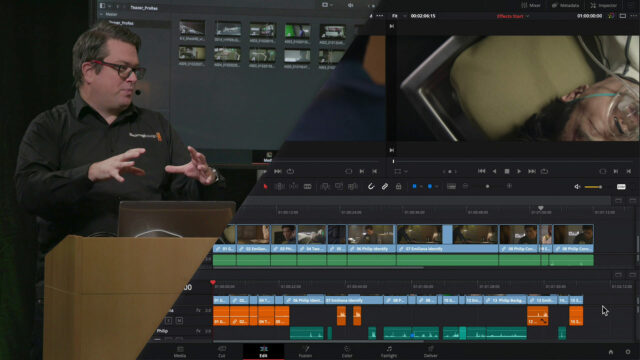 During this year’s Photo & Adventure trade show in Vienna, Austria, the cinema5D team was in charge of the “Film & Video Stage” content at the show. We invited a series of interesting guests from our industry to talk about various topics. You can see the initial post here. We decided to publish the most interesting topics again in a separate articles. You can expect those to be published in the next weeks. This article is covering Simon Hall’s presentation showing basics of editing in Blackmagic Design DaVinci Resolve 16.

DaVinci Resolve used to be known mainly as a color grading software. It still is one of the most powerful software for colorists. In recent years however, it also became a powerful NLE editing application. Blackmagic Design managed to concentrate lots of functions from various stages of post production in one application.

Simon Hall is a senior Blackmagic Design trainer and an experienced editor. In summer, he gave the cinema5D team a two-day DaVinci Resolve training, and because we liked it so much, we decided to invite him to Photo & Adventure trade show to show the basics of editing in Resolve. 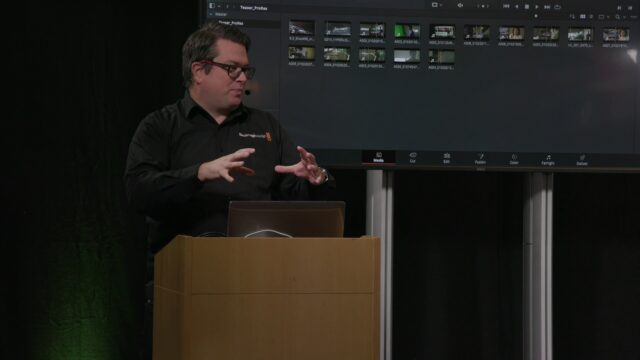 Simon started by describing the different pages (sections) of DaVinci Resolve. The app has 7 pages:

In his very short workshop on the cinema5D stage, Simon described key functions of the Media, Edit, Fusion, and Deliver pages.

Simon demonstrated how the Media page allows working with smart bins, how metadata can be used to rename batches of clips. He briefly showed how (using Blackmagic cameras) all kinds of metadata can be added to clips during shooting and then used to make the editor’s life easier when organizing the footage in Resolve.

There is a neural engine in Resolve which has face recognition. It can analyze clips and group the same faces. It can then rename the clips and organize them in smart bins according to the characters included. 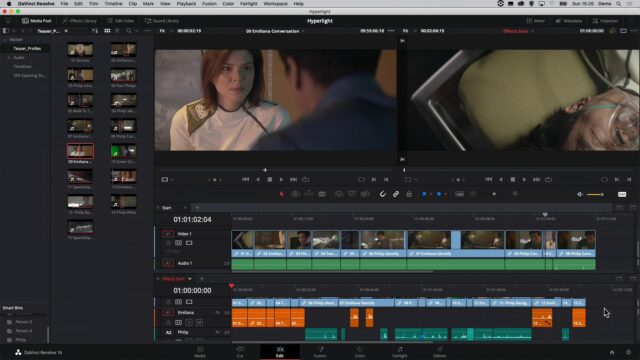 Edit page offers similar workflow like other NLEs. When importing the footage, J, K, and L hotkeys can be used to navigate through clips while I and O hotkeys can mark in and mark out the desired section.

Resolve offers various different tools to make editign faster – selection tool, razorblade tool, trim tool, and more. It is possible to stack timelines, to look at more timelines at the same time, copy clips between them, and so on.

Simon also showed the options of slowing down footage in Resolve. In the Inspector tool, there are more options for retiming and scaling. Optical Flow, for instance, makes Resolve generate new frames and smoothen the slowed down footage. Depending on the complexity of movements in the clip, there can be unpleasant artifacts sometimes. 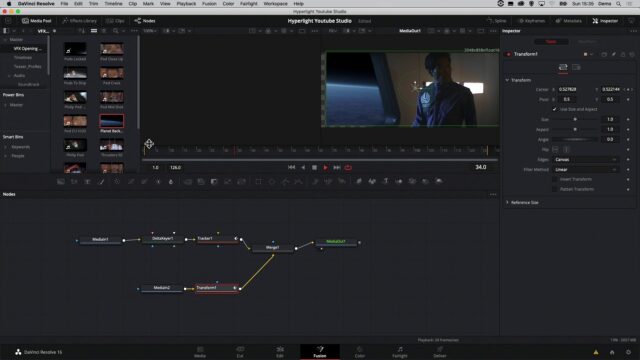 There are some effects and transitions available on the Edit Page, but for more complex effects ad compositing, there is a dedicated Fusion Page. Simon briefly showed the capability of that page with green screen masking and tracking.

The Deliver Page is all about rendering out the completed projects. Resolve offers optimized presets for YouTube and Vimeo and there are also options for exporting in IMF format (for Netflix) or DCP format (not encrypted, for cinemas).

Simon Hall had of course very limited time on our stage, but Blackmagic Design offers free training manuals and online videos for DaVinci Resolve like we just reported about recently.

Do you use DaVinci Resolve for editing? Do you miss some features from other NLEs? Let us know in the comments underneath the article.