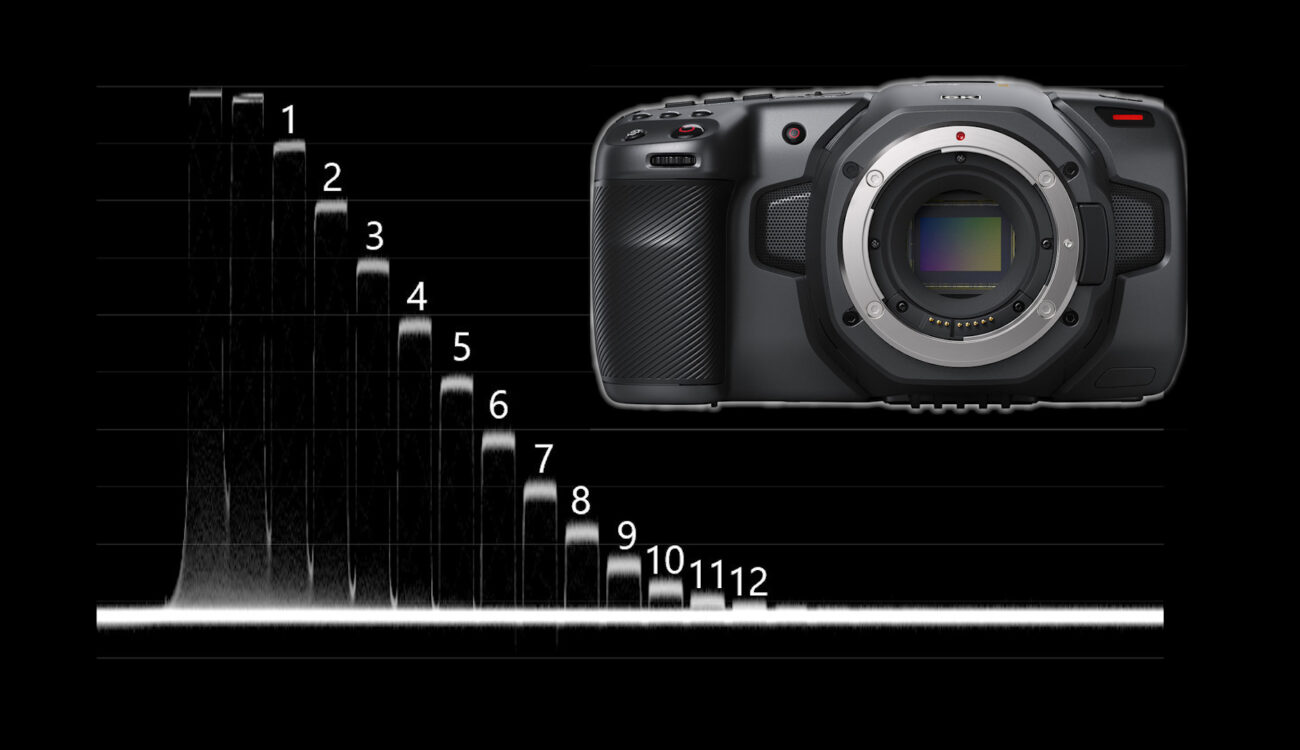 After part 1 and part 2 of our coverage of the new Blackmagic Pocket Cinema Camera 6K we finally can bring the cinema5D Lab results to you. Interested to see how it fares? Will the lab reveal differences to the Pocket 4K? Well – let’s get started … 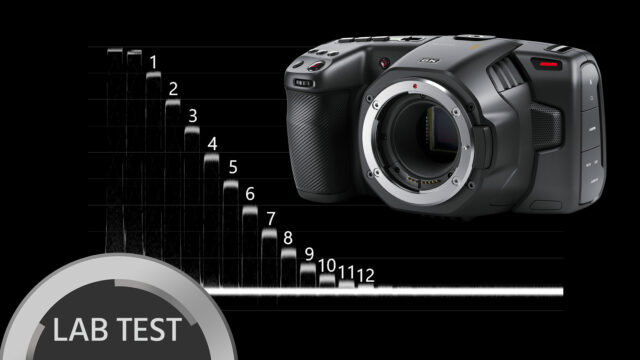 Being a long time owner & user of the original Blackmagic Pocket Cinema Camera for 6 years now, and having tested the BMPCC 4K already in our lab a while ago, I was now really curious to get my hands on the new BMPCC 6K.

The spec’s on Blackmagic Design’s website would list no difference to the Pocket 4K in terms of dynamic range – both cameras are listed with 13 stops dynamic range.

So we decided to do our new latitude test in addition to the standard dynamic range and rolling shutter test with the BMPCC 6K and BMPCC 4K in order to see if we can find differences. And yes, as you will see below there are differences.

But let’s start first with the rolling shutter measurements.

We are using a new test method based on a high frequency, quartz & micro controller based strobe light at 300Hz. As the sensor readout happens from the top to the bottom, we are getting a sequence of black and white bars from the strobe.

The strobe test reveals a rolling shutter of 19.8 [ms] – now we know why it cannot do full sensor readout in 6K faster than 50 frames per second (60fps at 1:2.4 aspect ratio) – there is simply not enough time for a higher frame rate in full sensor mode. 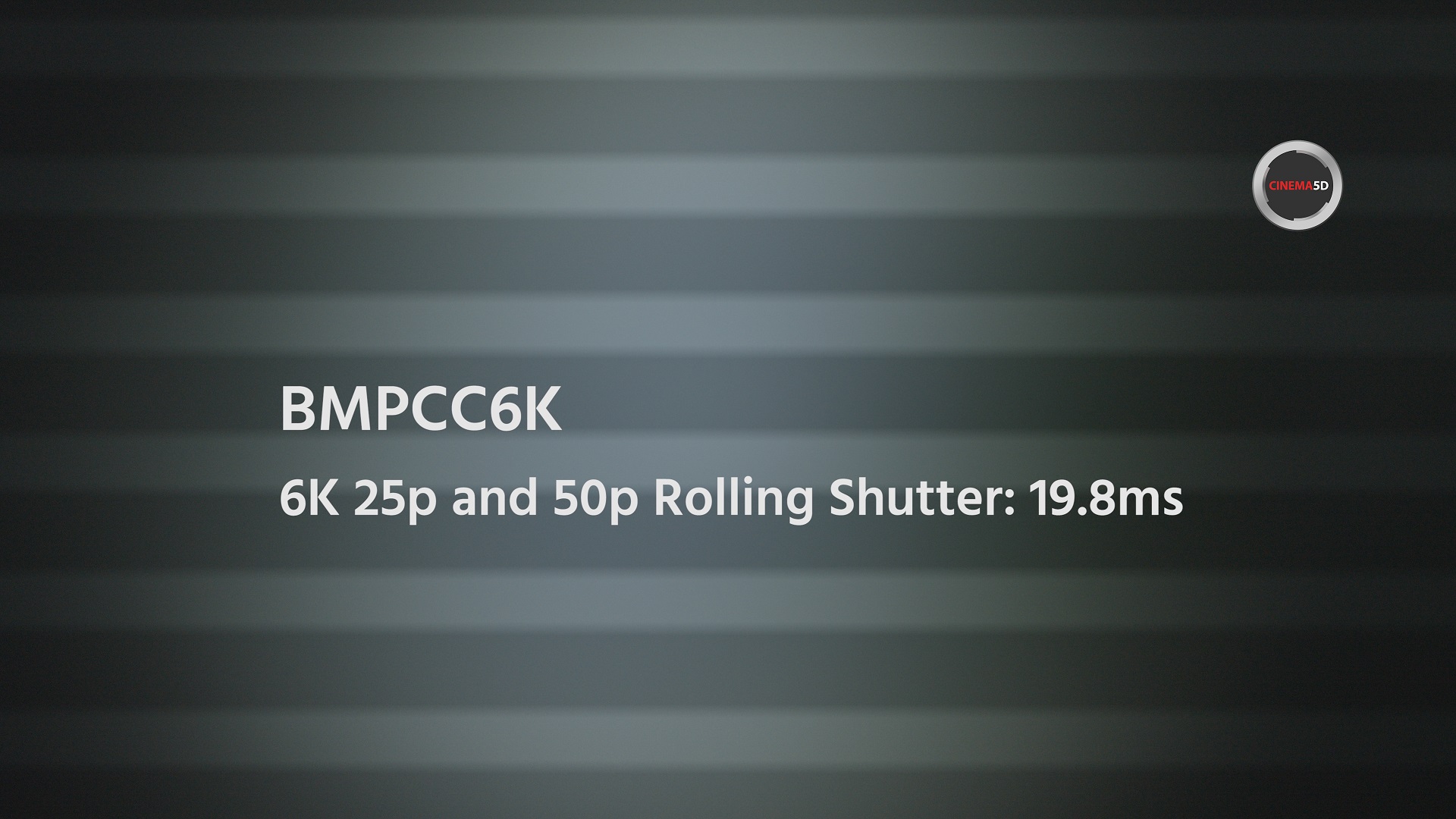 Dynamic Range of the BMPCC 6K

Like always, we use our DSC Labs Xyla 21 Stepchart in conjunction with the IMATEST software to derive our results (see how we test here).

The BMPCC 6K uses a dual ISO sensor with 400 and 3200 as base values, hence both will be shown below.

Using the full sensor readout at the maximum resolution of 6K (6144×3456) with BRAW 3:1 constant bitrate settings, the waveform plot of the stepchart visually reveals about 12 stops of dynamic range.

BMPCC 6K waveform plot of the stepchart. About 12 stops can be identified above the noise floor.

Developing the raw files via DaVinci Resolve and exporting high quality tiff’s to IMATEST a dynamic range of 11.8 stops at a signal to noise ratio of 2 is calculated (12.9 stops for SNR = 1). 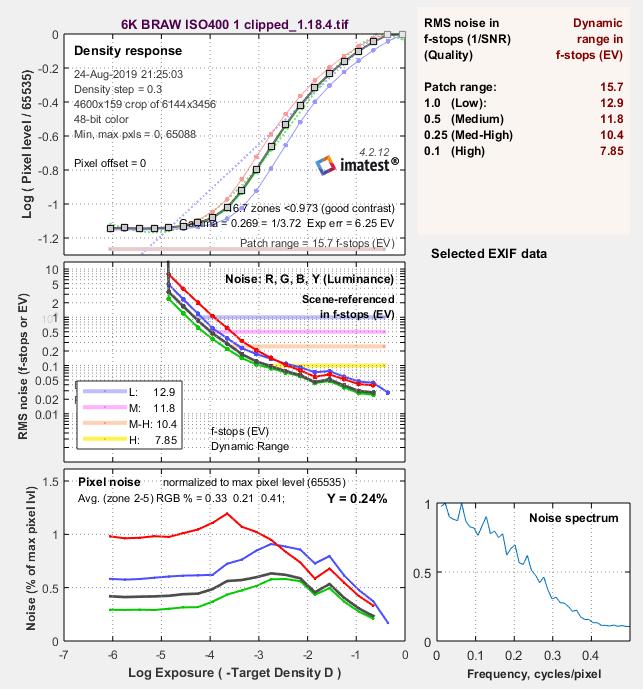 This is 0.2 stops better than the result we got for the BMPCC 4K.

Quite interestingly, using the ProRes HQ full sensor readout at Ultra HD, the dynamic range increases slightly from 11.8 stops to 11.9 stops at a signal to noise ratio of 2 (13 stops for SNR = 1).

At ISO3200 the dynamic range drops quite significantly to 10.0 stops (SNR = 2, medium value in the upper right hand table below) according to the IMATEST calculations, see the result below. 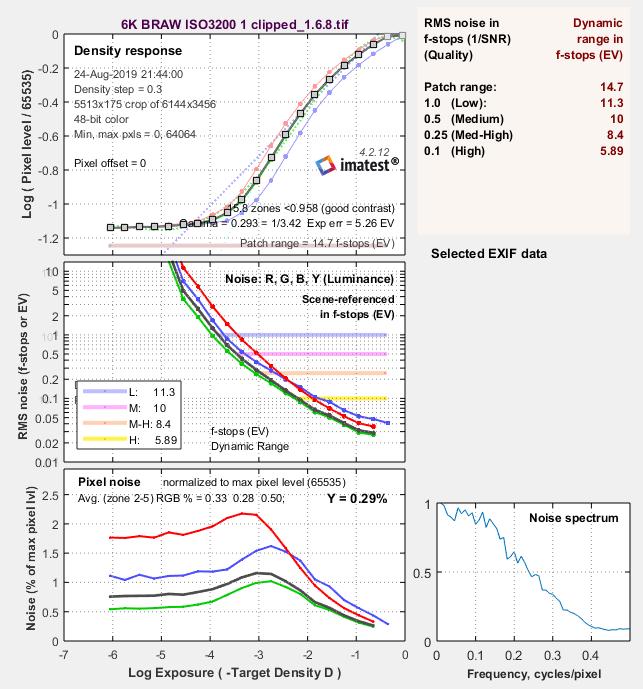 BMPCC 6K IMATEST result of 6K BRAW ISO3200. 10 stops are calculated for a signal to noise ratio of 2.

This is less than the BMPCC 4K which shows a corresponding value of 10.5 stops at the higher ISO setting of the dual gain circuit.

But as mentioned many times before, while transmissive tests using stepcharts are the simplest/most accurate/comparable tests of dynamic range – they also give us very little information regarding how the camera responds to colors and detail across that range.

That is why we are introducing an additional lab test, the latitude test.

First results of this new test have been shown already in the Panasonic S1 VLOG article of my colleague Johnnie, but let me briefly explain again what it is.

Latitude basically shows the capability of a camera to retain color and detail while over- or underexposing the image and normalizing it thereafter.

In our latitude test, we have a standard scene where either Johnnie or Nino are sitting next to a Color Checker. 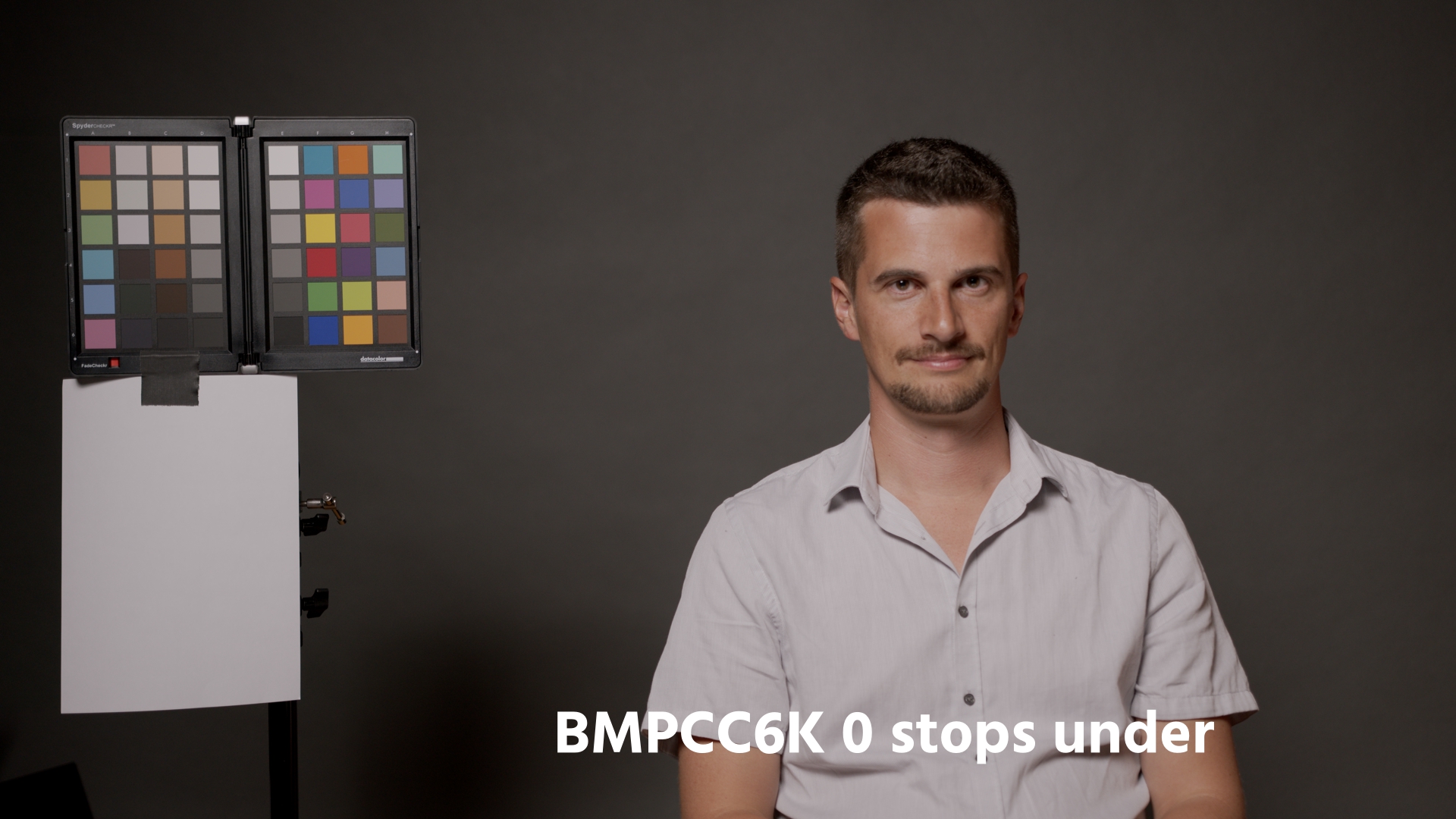 The face is exposed at max. 60% luma value, the white sheet of paper at 65%. From there on in a succession of tests we always double the shutter value from scene to scene, hence underexposing the scene by 1 stop from the previous one until we have reached 5 stops of underexposure. 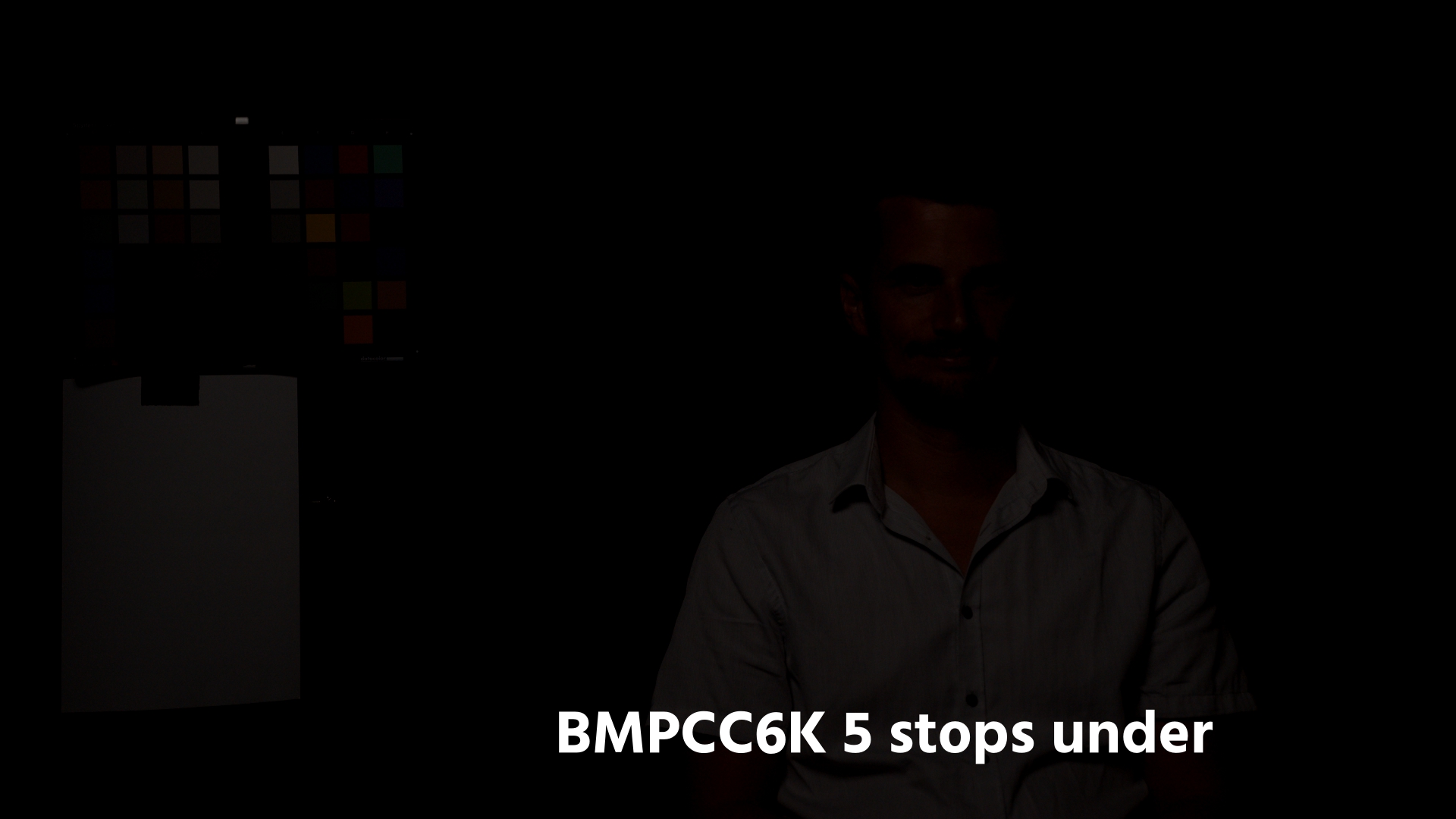 Hence, we brutally underexpose the studio scene – and then normalize it back to 0 stops to reveal the color, detail  and noise. This is really a torture test and the images of most cameras with less sophisticated codecs break down already at 2-3 stops underexposure.

Both the Pocket 4K (using 3840×2160 resolution) and 6K (6144×3456 resolution) were setup with BRAW 3:1 constant bitrate, ISO400 25p. The shots from both cams were graded in DaVinci Resolve using a Blackmagic film to video LUT, and then I tried to match both cams as closely as possible by some smallish tweaks. 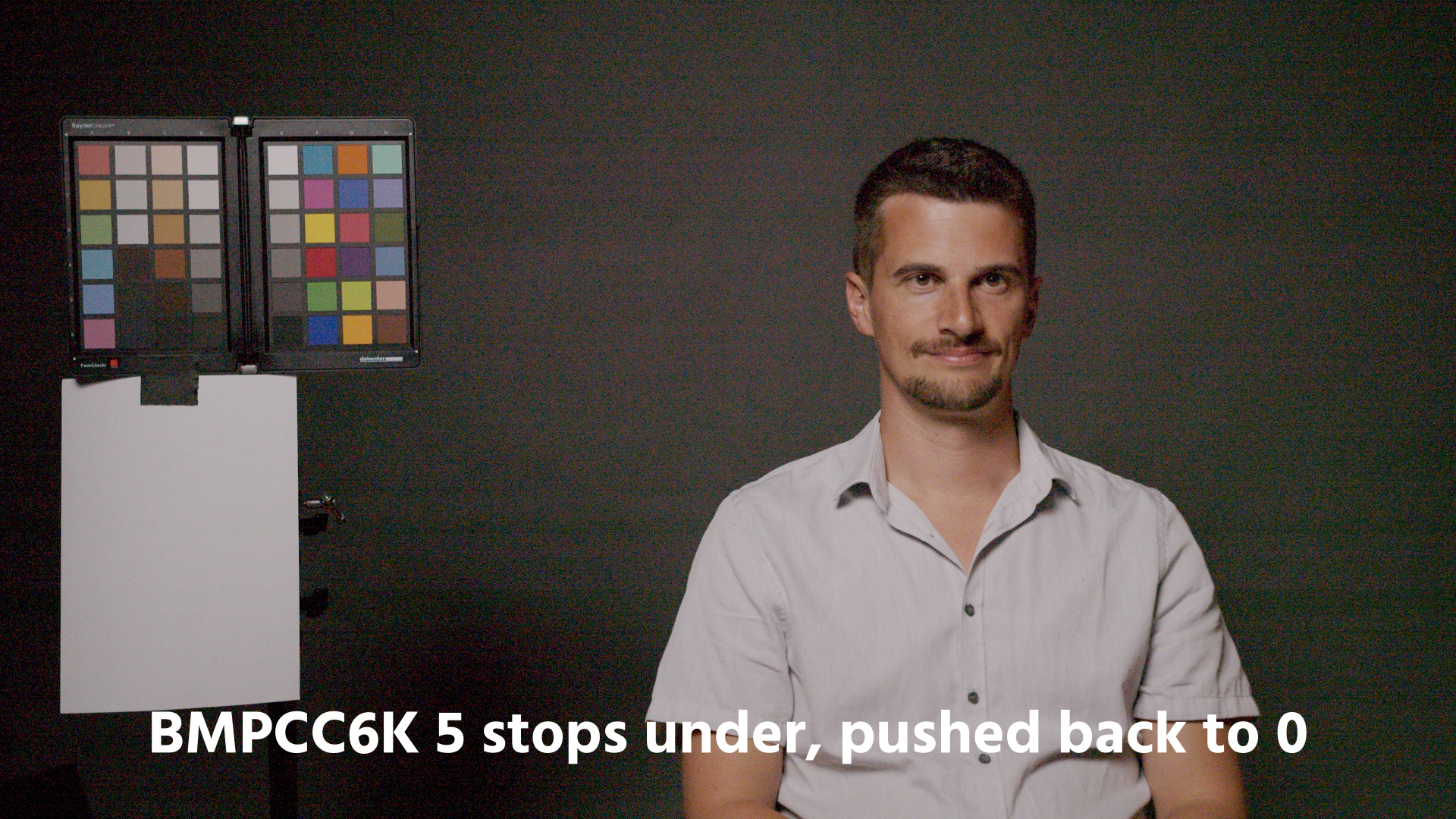 And above you can already see the result – the BMPCC 6K camera fares very very well in this test. It starts to show horizontal stripes (which cannot be removed by noise reduction as you will see further down) and the noise becomes excessive, but color information is retained very well.

See below the same scene, shot with the BMPCC 4K, also 5 stops underexposed and brought back to 0: 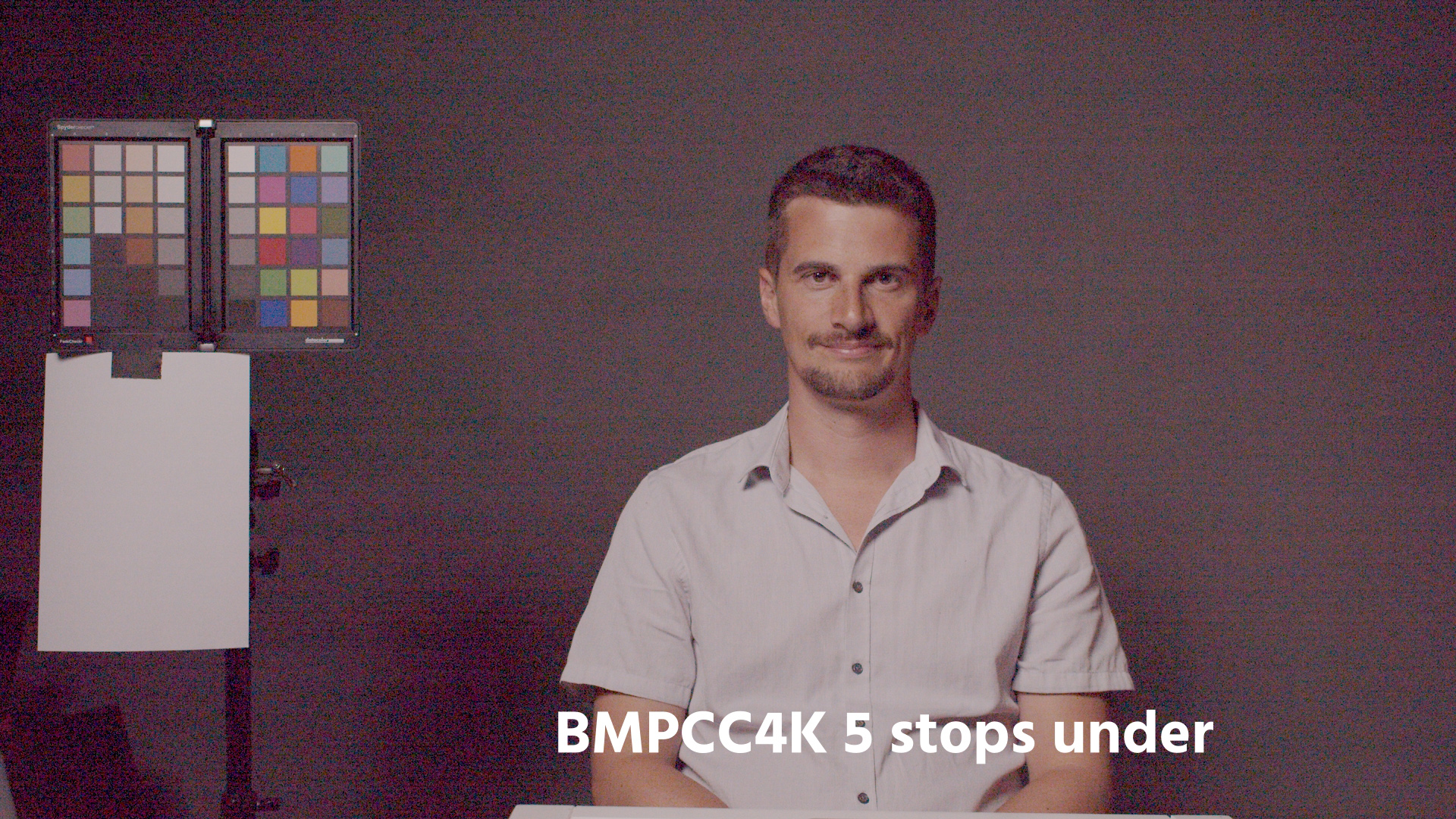 Clearly, color information deteriorates with the BMPCC 4K and the image becomes pink. Let’s remember that both cams started like this: 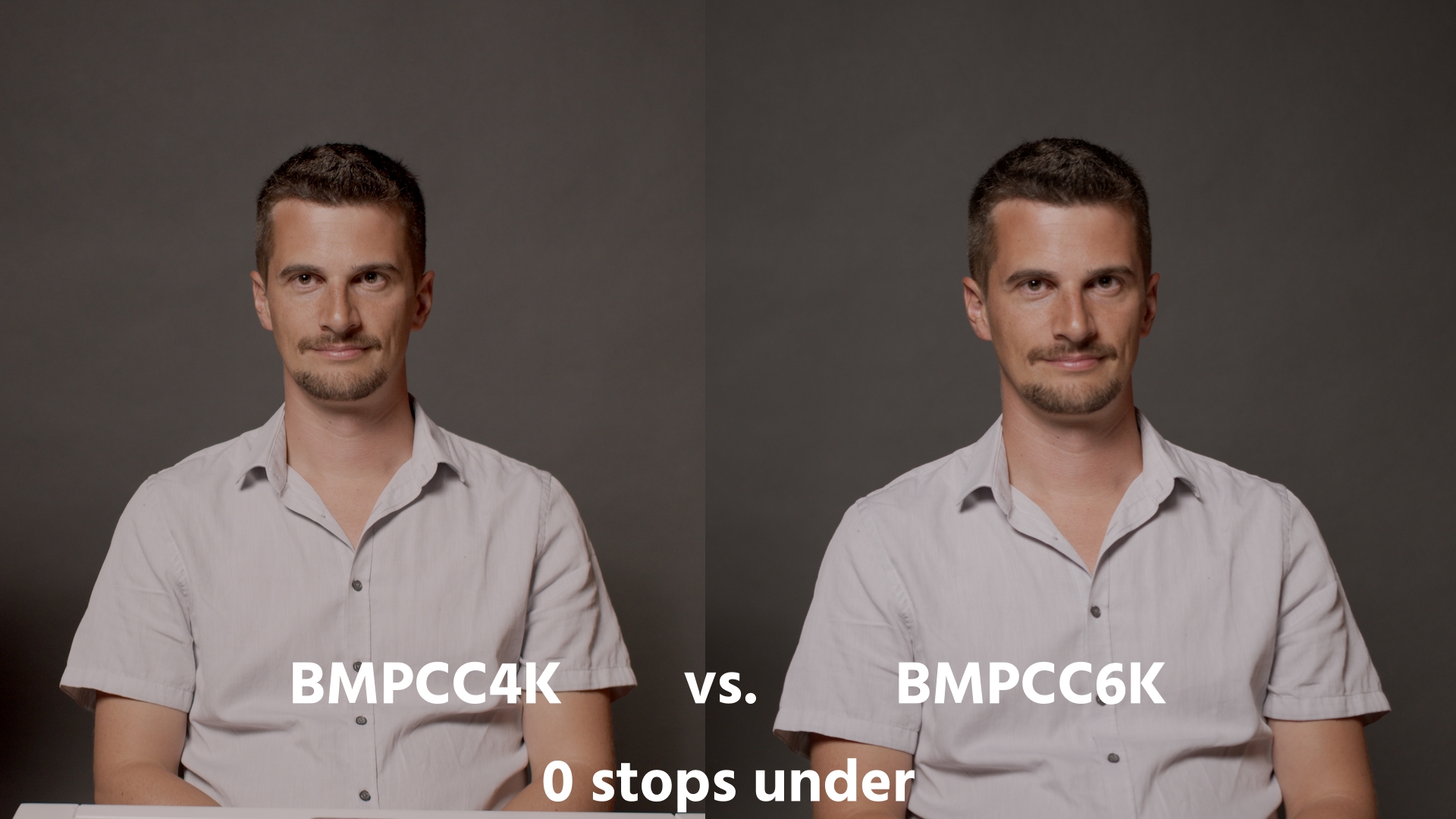 Here are both cams again side by side at 5 stops underexposure, brought back to zero: 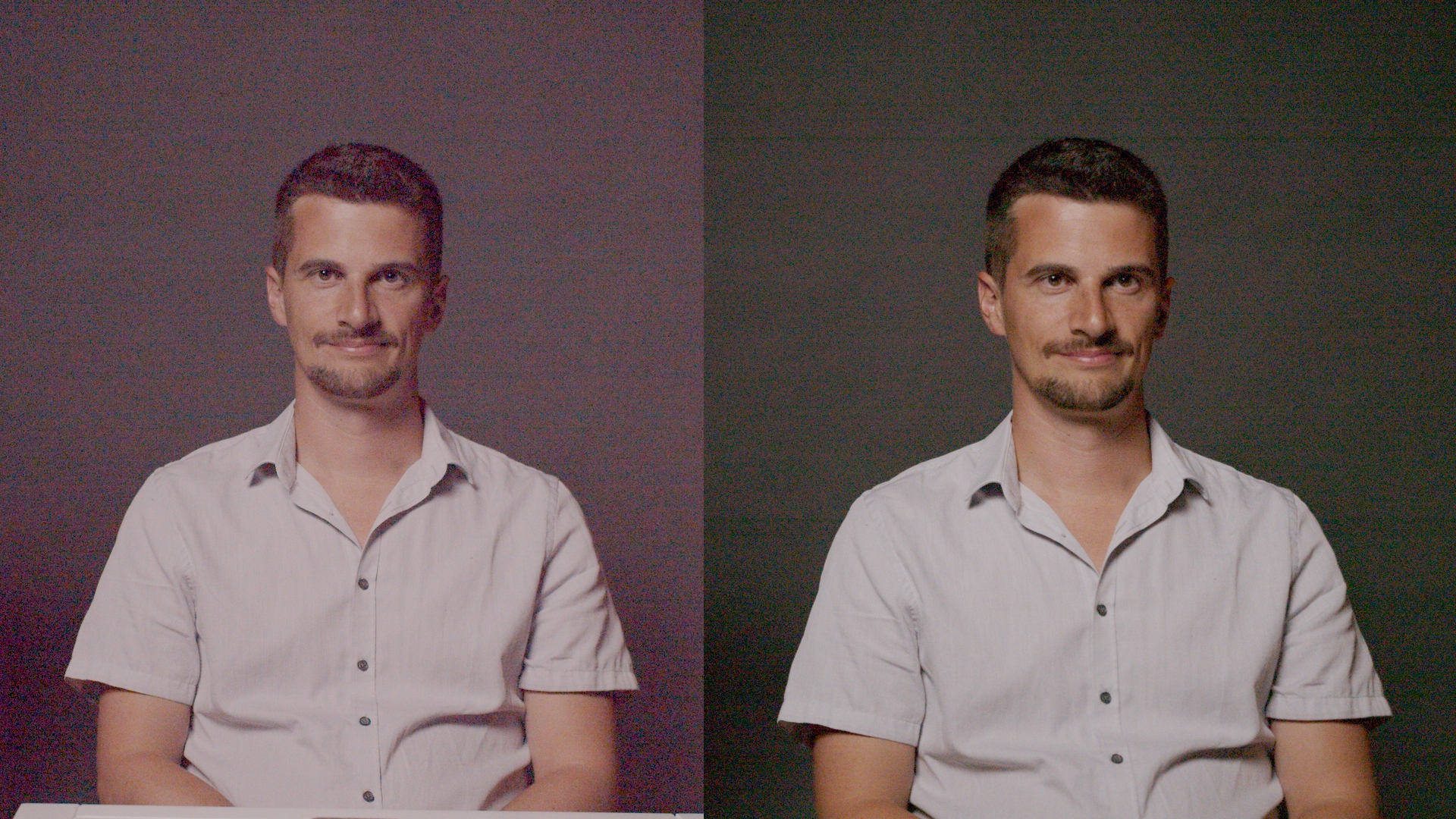 BMPCC 4K vs. BMPCC 6K at 5 stops underexposure, brought back to 0

Hence, in this test it becomes clear that the BMPCC 6K retains the color surprisingly well, whereas the BMPCC 4K image starts to become pink already at 3 stops under, and larger patches of pink noise appears – which is difficult to remove as you will see below.

What I found interesting though, while the waveforms at zero underexposure look completely identical on both cams (after grading), the more we underexpose and bring it back by adjusting the exposure (by the exact amount of stops) in the camera raw tab in Resolve, the brighter the BMPCC 4K image appears. The BMPCC 6K image stays the same across the exposure range. 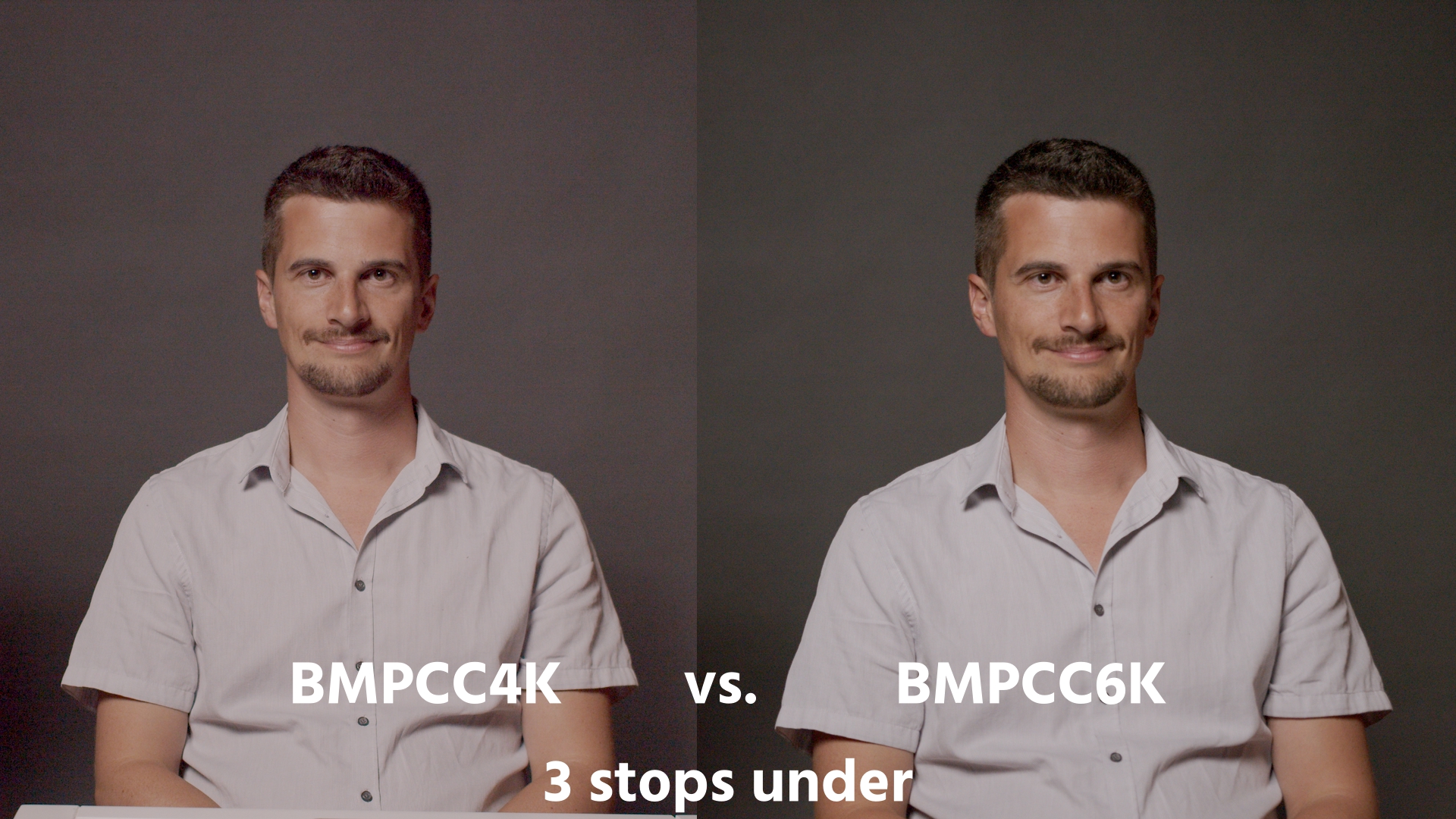 BMPCC 4K vs. BMPCC 6K side by side at 3 stops underexposure, brought back to 0 using the camera raw tab in DaVinci Resolve – the limit of underexposure is reached with the BMPCC 4K whereas the Pocket 6K is still fine

Now, as we shot in BRAW with both cams, the big question is whether using noise reduction in DaVinci Resolve can save some of the underexposed shots (temporal NR: 3 frames, threshold:30, spatial threshold: 10).

Yes, it can, but only on to a certain point – as soon as the horizontal stripes start to appear in the image, noise reduction cannot get rid of those and I found that the pink chroma noise is not removed any longer at 4 stops underexposure with the BMPCC 4K.

And this brings us also to the clear, final result, using noise reduction:  BMPCC 4K is very clean until 3 stops under, BMPCC 6K until 4 stops under!

(Note: this result is clear during playback of the video files – the static, scaled images in this article tend to look much better than the moving images). 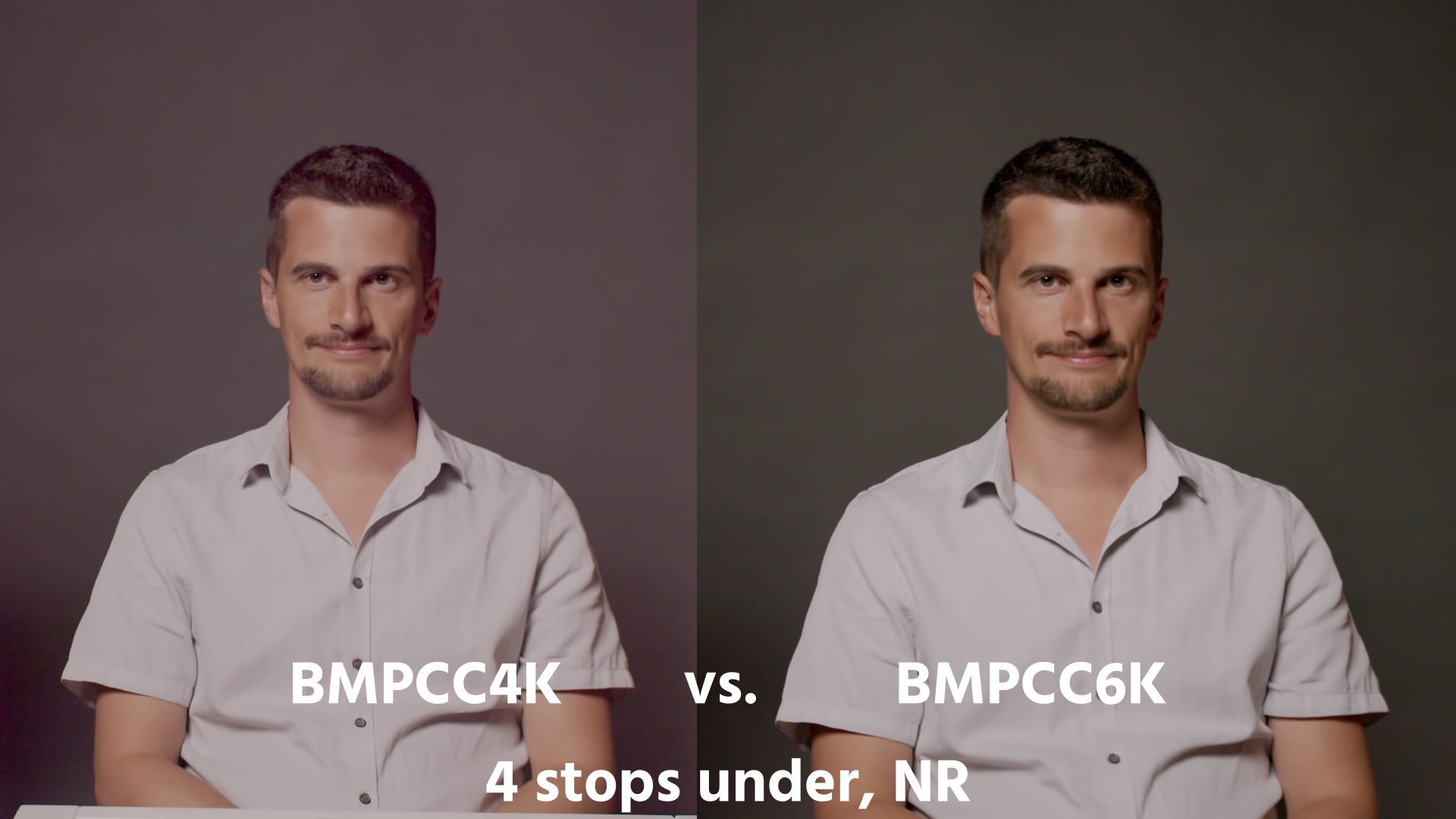 BMPCC 4K vs BMPCC 6K at 4 stops underexposure, brought back via the camera raw tab in Resolve, temporal and spatial noise reduction applied

The lab results obtained with the new BMPCC 6K are impressive to say the least. The combination of a very good dynamic range with a superb codec (Blackmagic RAW) leads to superb images.

At a time where brand new much more expensive “cinema” camera’s are released with H.265 / H.264 as the only codec options, Blackmagic Design once more shows us all what is possible at this price point.

The only little drawback with the Pocket 6K that I see from the lab test is the rolling shutter value which is a bit on the higher side – given the lack of internal stabilization handheld shots are risky business with this camera.

Have you made your first experiences with the new BMPCC 6K? What do you think? Let us know in the comments below.