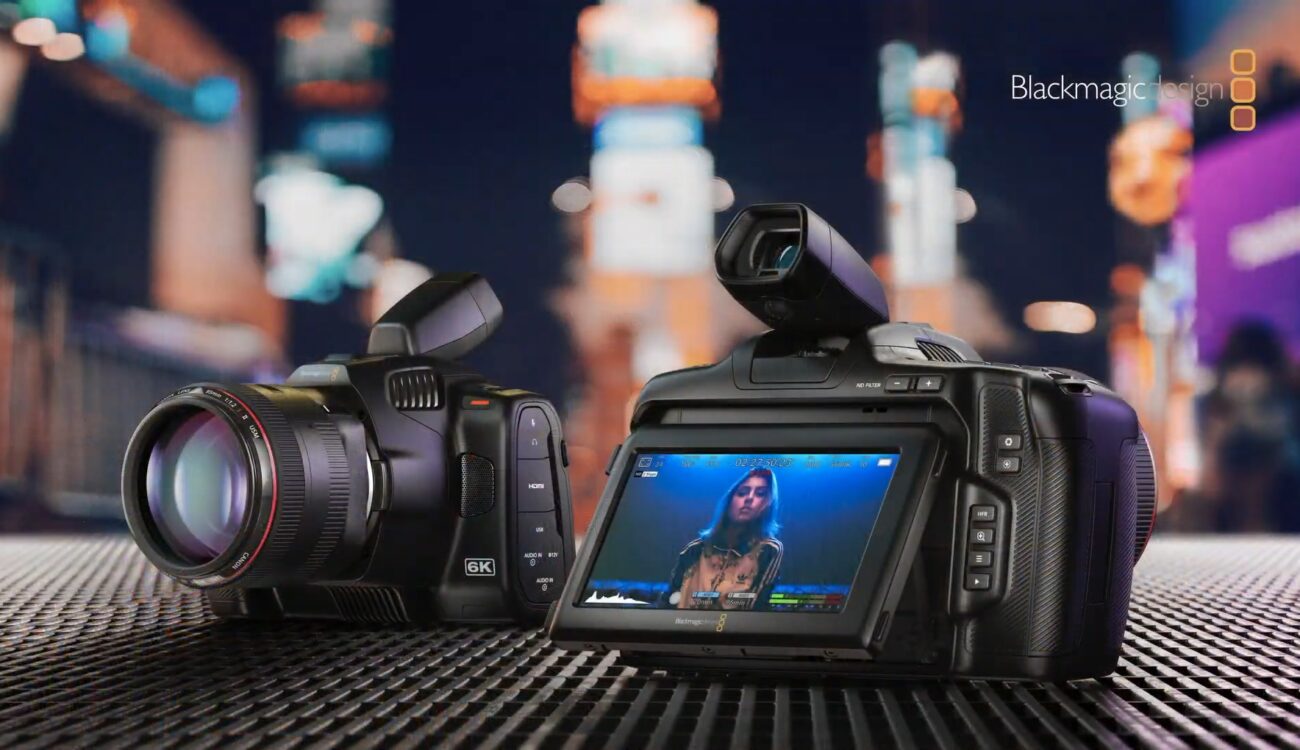 During today’s live stream, Blackmagic Design CEO Grant Petty announced a lot of new products. We will have a separate article about the new ATEM Mini products and Web Presenter HD soon. Here we will focus mainly on the new Pocket 6K Pro as well as the new EVF and battery grip. Let’s take a look at these new products.

There is a 6144 x 3456 Super35 image sensor in this new camera along with a Canon EF lens mount. Blackmagic Design claims the camera has 13 stops of dynamic range with dual native ISO up to 25,600. Finally, Blackmagic Design added built-in IR ND filters in the Pocket-style camera body. The ND in the Pocket 6K Pro is available in 2, 4, and 6 stops strength. The camera also features the new generation 5 color science – the same as the URSA Mini Pro 12K.

The BMPCC6K Pro will shoot up to 60fps in full resolution or up to 120fps windowed. Just like with the BMPCC 6K, the 10-bit Apple ProRes 4:2:2 is available only until 4K resolution, higher resolution is only possible in 12-bit Blackmagic RAW.

The large 5″ touchscreen LCD in the back now has 1,500 nit brightness and it is adjustable – it can be tilted up or down. It now functions pretty much in the same way as the Tilta modification for the previous BMPCC models.

There is an extra Mini XLR audio input so the BMPCC6K Pro has a total of two Mini XLR inputs – both with 48V phantom power. There’s also a 3.5mm audio input for connecting video camera microphones, along with a built-in speaker for playback and a 3.5mm headphone jack. The new 6K Pro uses the same media as the BMPCC4K and 6K.

The Blackmagic Pocket Cinema Camera 4K and 6K use removable LP-E6 type batteries while the new 6K Pro model uses larger NP-F570 batteries. Again, there is a locking DC power connector and the included AC plug pack which can power the camera and charge the battery simultaneously. Even the USB-C expansion port can charge the battery.

Optional EVF for the BMPCC 6K

The optional viewfinder for the new BMPCC 6K Pro features a 1280 x 960 color OLED display. It is easy to install on the camera and it connect via a single connector. The viewfinder has a 70 degree swivel range, which is amazing, and comes with 4 different types of eyecups for both left and right eyes. It costs just below $500.

There is a glass diopter with a focus adjustment from +4 to -4. The main LCD on the camera will turn off when using the EVF to save battery.

There is also a new batery grip for the BMPCC6K Pro. Unlike, the older grip, the new one allows the camera to keep the battery inside. It communicates with the camera via power pins.

Grant Petty also teased a new camera update for the BMPCC 4K and 6K cameras. The camera update 7.3 is coming approximately in one month. This free firmware update will add a new RGB histogram as well as the new Generation 5 color science to both Pocket cameras.

What do you think about the new Blackmagic Pocket Cinema Camera 6K Pro? Do you use previous BMPCC cameras? Let us know in the comments underneath the article.