Canon 8K technology was demonstrated with a prototype camera body during Inter BEE 2018. We talked about it with Toshiyuki Akimoto from Canon who is responsible for the development of 8K monitors and cameras. 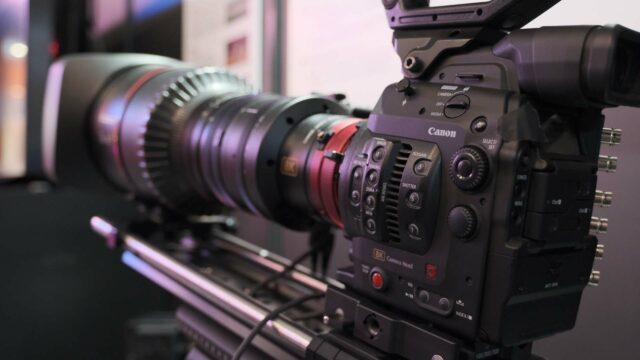 8K resolution is slowly making its way in the line-ups of camera manufacturers. During Inter BEE 2018 we saw an interesting 8K camera concept from Astro. RED of course has already had working 8K cinema cameras for a while with their MONSTRO and HELIUM cinema cameras. Panasonic claims to have an 8K capable camera for the Olympic Games in Tokyo in 2020. Now Canon also presented their 8K cinema camera concept.

The Canon 8K camera concept presented at Inter BEE 2018 has quite a compact body very similar to the Canon C300 Mark II. It will have a super 35mm sensor and an 8K processing unit inside and mind you that recording will not be done internally. You will have to find and attach an external 8K recording solution. According to Canon, the purpose of this demonstration is to research the market and to gather the customer’s opinion regarding future 8K demand.

Since this 8K camera is still only a prototype and future technology demonstration, there is no detailed explanation of its functions or ergonomics yet. The presented camera, however, looks to being very close to the production stage.

Canon has in fact already demonstrated the same system at the “Canon Expo” in 2015. It seems that Canon has had 8K technology for quite a while already. We can only guess the reason for not releasing a Canon 8K capable camera til now was because the 8K market has not grown enough yet. 8K is being promoted mainly in Japan – there were very few 8K demonstrations at international trade shows like NAB or IBC.

As Akimoto-san describes in the above video, Canon is observing the market and they are also trying to find other markets than the broadcast and cinema divisions. Even though creating a beautiful image with high resolution shooting is the straight forward usage for a Canon 8K camera, there are other areas that can benefit widely from the ultra-high resolution. For example in the scientific or security field 8K can be very beneficial mostly because of the additional flexibility to zoom-in the picture after it was recorded. Finding a specific person in a crowd would be a typical example of the usage in the security field.

In a similar manner as Panasonic, Akimoto-san mentioned the Olympic games in Tokyo in 2020 as a possible time for the release of a Canon 8K camera. We can probably also expect more affordable 8K consumer displays to be available by then.

What do you think of the Canon 8K concept camera? When do you think we can expect a real 8K boom in the broadcast and cinema industry? Let us know in the comments underneath the article.