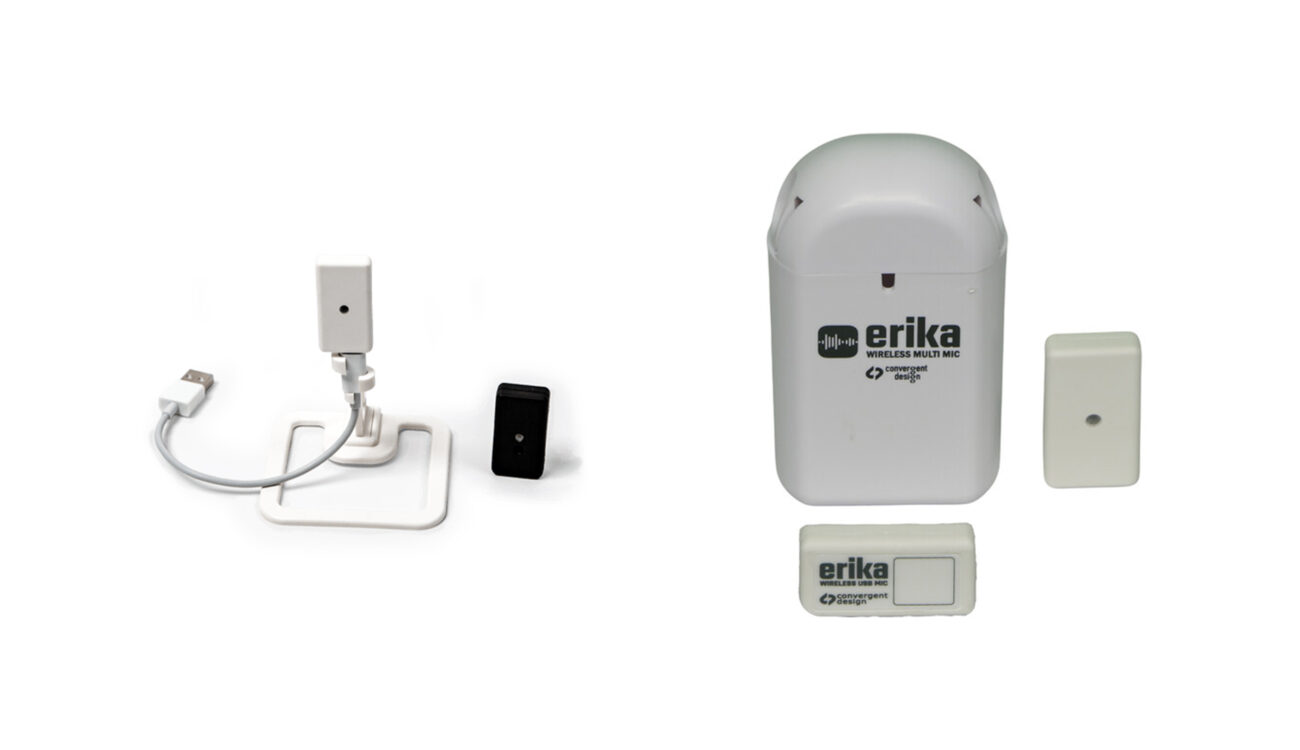 Convergent Design has just released a new USB wireless microphone system: the Convergent Design Erika. This system consists of a wireless receiver that connects to your laptop or smartphone via a USB cable and up to twelve transmitters. Let’s take a closer look at it!

Convergent Design is an American company mostly known for its lineup of on-camera monitor/recorders. Well, I should have said “was mostly known” since the company discontinued all of its video recorders – including the Apollo and Odyssey 7Q/7Q+ last year.

Let’s get it clear from the beginning: the Convergent Design Erika is a USB wireless microphone system, which means you can’t use it directly with a DSLR/mirrorless camera at the moment. You can use it with a laptop or a smartphone, but not a video camera nor audio recorder since it doesn’t feature an analog output.

The main applications for the Convergent Design Erika are live streaming, podcast, and online meeting applications. For example, if you are often doing Zoom/Skype calls on the road, it could be a solution to improve your audio quickly and easily.

As I mentioned, the kit consists of two parts: the receiver that connects to your computer/smartphone via USB and one – or more – transmitters. Please note that, at the moment, “Apple products require a special A/V cable which is not readily available. Erika does function with Android phones when combined with a video or audio recording app.” In short, it works with Android but not iOS devices.

The transmitters are pretty small, and most of the features are built-in: the battery that you can recharge via USB, the omni-directional microphone, and a small LED status light. Unfortunately, the Erika transmitter doesn’t have an audio input port, so it means you’ll have to attach it directly to your clothes and wear it to get good sound. However, the kit comes with magnets that you can put under your shirt/dress/jacket.

One nice feature is that you can use up to twelve transmitters with one receiver. The system uses dynamic switching technology without additional hardware, which automatically enables one mic and mutes all the other ones.

Beyond supporting multiple mics to one receiver, dynamic switching blocks the noise, combing, and echoes from “open” mics while dramatically reducing the wireless traffic compared to analog wireless mics. Judging by the sample above, it looks to work okay, but the audio quality is not the best I ever heard.

In terms of latency, the Convergent Design Erika has a latency of “approximately 30 mS end to end, or less than one frame of video (at 25/30 fps),” according to the company.

According to Convergent Design, a “new wireless receiver with analog and USB audio, compatible with current Erika mics” should come out in Q4 2021. In addition, it’ll support balanced audio out (XLR) feeds, so you can output the audio to speakers or an audio recorder/camera.

The Convergent Design Erika is available now in various packages starting at $129.00 for one transmitter and one receiver. Of course, you can buy additional transmitters/receivers later down the road if you need them.

What do you think about this USB wireless microphone system? Do you think it would be a useful piece of kit for you? Don’t hesitate to let us know in the comments down below!