The datavideo NightHawk prototype was unveiled at IBC 2017 – it’s a camera based around a new self developed 20MP Micro Four-Thirds low-light sensor.

Known for event mixers and engineering hardware, datavideo has moved into the professional camera market by creating the “NightHawk”. Equipped with a very light-sensitive 20MP CMOS sensor capable of ISO speeds up to 409,600, real-time HDR and equipped with a Micro Four-Thirds mount, which gives users a wide range of lens choices (Such as Panasonic and Olympus lenses). Datavideo hopes to capture the imagination of those who are in the market for a compact design and in a need of a camera that can shine with various applications. 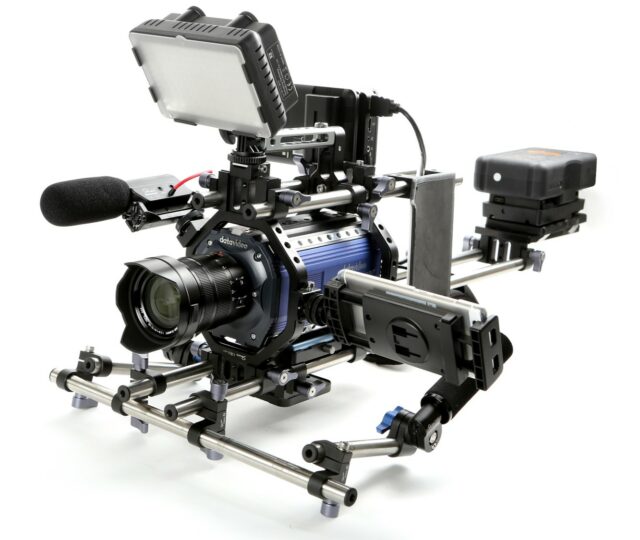 The target audience of the datavideo NightHawk will be broadcast and remote application use. With 3 HDMI outputs and plans for adding an SDI outputin the future, the camera would fit in perfectly for live events such as concerts, presentations, or even remote wildlife applications with live video outputs.

The modifiable body gives you the freedom to build up and enhance your own professional camera rig, especially when there is no internal means of recording the footage. Datavideo suggesting customers to build their own rig with devices such as the recording products from Atomos. In terms of sound, the prototype only featured a 3.5mm jack input, but this will be replaced by dual XLR inputs for embedded audio. Although the camera will have built-in WiFi for control features, there is no confirmation of whether remote focus or zoom will be available in the datavideo NightHawk.

With an estimated retail price between $3,000 and $3,500, plus the additional cost of an external recorder, the NightHawk probably isn’t anybody’s ideal first camera purchase, but it will have some specialist applications most certainly in the remote and live camera areas. Datavideo also mentioned developing 4K recording capabilities in the future too.

Would the datavideo NightHawk satisfy your needs for a remote, low-light camera? Let us know in the comments.