In the 23rd episode of ON THE COUCH, I was lucky enough to sit with fellow bloggers and shooters Dan Chung, Clinton Harn from newsshooter.com and Emmanuel Pampuri from pampuri.net.

Do we really need raw video?

I started off by stating an observation: These days it’s almost as if smaller cameras (like Blackmagic cameras) mean more and higher data rates, often raw – while more advanced camera systems feature more advanced codecs (e.g. XAVC I in the FS7/F5/F55).

Dan pointed out that Panasonic is the manufacturer who addressed file size more than any other, because they come more from a broadcast perspective. People start to realize that RAW is not the holy grail for much work, and actually it slows you down – so now the future really is in efficient codecs, the right codec for the right job.

Emmanuel mentioned that people need to think about the workflow – the camera is just the first step of a longer workflow and people often neglect to look at the whole pipeline when thinking about what camera to shoot on.

Clinton talked about how he shot his first feature film recently, and they decided to shoot RED. He found working with it quite easy and loved the fact that you have different compression ratios of raw, which you can choose depending on how much post production goes into each particular scene or shot.

Dan said how it’s not practical for him as a news shooter in any circumstance to shoot raw – he shoots compressed formats like XAVC, MXF and so on … only in very difficult situations where for example he knows he has the time and budget to work on a shot with a blown out window, it makes sense for him to shoot raw to get those highlights back, for example. 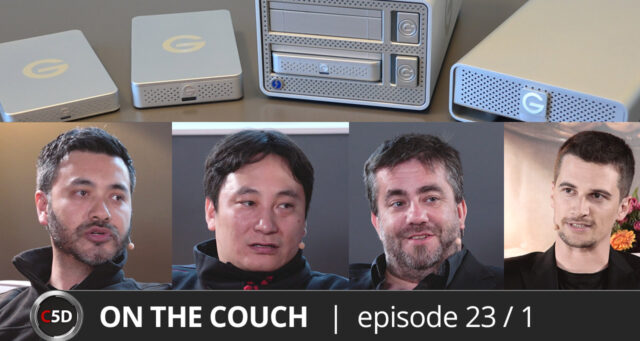 Regarding backup workflow we talked about how everyone processes the massive amounts of news footage he is gathering and backing up. Much like me, Dan makes back-ups on set using small 2.5” drives, and makes three copies. One of those copies should be kept away from the other two for safety purposes. Emmanuel takes the G-Dock with the G-Drives ev for the shoots on the day, the third one is a larger drive at the hotel which is backed up to after the shooting. One of the G-Drives ev goes back to the studio via mail every day in the evening.

I mentioned how dual slot recording for instant backup takes a little bit of pressure away from backing up on set, because you end up with an instant copy of the whole card on another card. However not all cameras support this yet, the C300 and the FS7 do though.

Clinton mentioned how it makes a lot of sense to use only smaller cards in cameras – just in case something happens, you simply lose less footage. Common sense that should be applied by anyone – however it gets harder with cameras like the Sony A7s which takes 64GB SDXC cards (that take around 2.5 hours of footage) as a minimum size.

Dan summed the topic of storage up concisely by saying, “have a storage plan and stick to it – because when you don’t and when you vary the plan, that’s when things get lost or missing.”

In the next part of this episode we talk about permanent backup strategies for data – how can your data survive over decades? Check back in a few days for part 2 of this episode of ON THE COUCH.