The DriveMount is a new Kickstarter project – an aluminum case, which allows you to attach a standard 2.5″ SSD to a 1/4″-20 screw hole (like the one on top of the Blackmagic Pocket Cinema Camera 4K). Depending on the pledge you choose, the bundle will come with a USB-C cable, standard 1/4″-20 threaded mount, standard Shoe Mount, 15mm Rail or even a 500GB SSD. 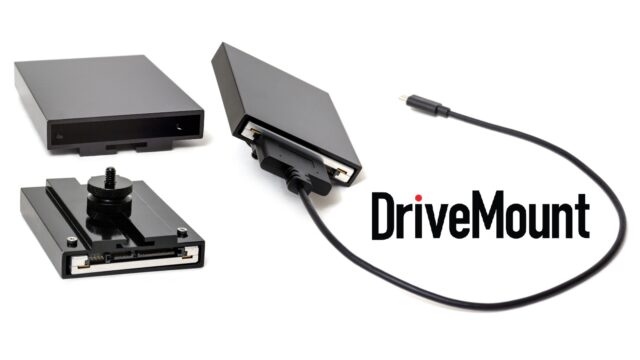 The Blackmagic Pocket Cinema Camera 4k has already been on the market for a couple of months now. For more information about the BMPCC 4K, you can check out the comprehensive review that my colleague Nino did in October. The one feature of the new BMPCC 4K that is relevant for this article right now, is the ability to record to an external SSD via USB-C port. Many filmmakers were really thrilled when this feature was first announced, because SSDs are a great speed-size-price package.

Why Record to SSD?

The new Blackmagic Pocket Cinema Camera 4k can record to either SD cards, CFast 2.0 cards or SSDs. SD cards are relatively cheap, but their write speed does not allow for highest quality (Cinema DNG RAW 270MBps) recording. CFast 2.0 cards are fast enough for whatever the BMPCC 4K sends their way, but they are quite expensive. Last but not least, SSDs are fast enough and they are significantly cheaper than CFast 2.0 memory cards. Please note that we are comparing prices-per-GB here. One question arose: “How to conveniently and securely attach SSDs to the camera?”

By the time the Blackmagic Pocket Cinema Camera 4k has started shipping, there have already been a few cages available. Other cage manufacturers introduced their versions shortly after. Now, there are a lot of options when it comes to rigging the BMPCC 4K. We already reported about:

This is not a comprehensive list, as there are probably even more options by now. Important is that some of the cage manufacturers already considered the SSD mounting option and offer solutions for that. I particularly like Tilta’s approach with their screws-secured USB-C cable.

There is a new product on Kickstarter from SoulCow (two independent filmmakers Ethan Soule and Ben Cowper), called DriveMount and it allows mounting a standard 2.5″ SSD to any 1/4″-20 screw hole. Because the Blackmagic Pocket Cinema Camera 4K happens to have one 1/4″-20 mounting point on top, this is a convenient way to mount an SSD right there, without any cage. It can, of course, nicely complement any BMPCC 4K cage too, as these always have plenty of 1/4″-20 mounting points.

The DriveMount is made out of black aluminum. It features sliding rails for the mounting point, so the case itself can be repositioned if necessary.

The advantage I see here is using standard external 2.5″ SSDs, as they are the cheapest option given the capacity. As an example: a 500GB 2.5″ internal SSD costs around $100,- whereas 512GB CFast 2.0 cards start at more than $500,-. The enclosure of a USB-C cable raises the cost of an SSD, yet with DriveMount you won’t need to worry about any of that. The enclosed cable features the SATA connector on one end and USB-C on the other.

Please remember: Kickstarter is not a shop and you don’t buy things there. You simply support the manufacturer with your money and as a benefit – if everything goes smoothly – you’ll get the final product at a discount.

What do you think of the DriveMount SSD mounting solution? Do you use SSD recording with the BMPCC 4K? Let us know in the comments underneath the article.