In this first-look hands-on review with the long-awaited Blackmagic Pocket Cinema Camera 4K, we took a close look at all aspects of the camera: Apart from the quality of the footage itself, we judged ergonomics, handling, design as well as low-light and dynamic range performance. Watch above and read below to learn more! 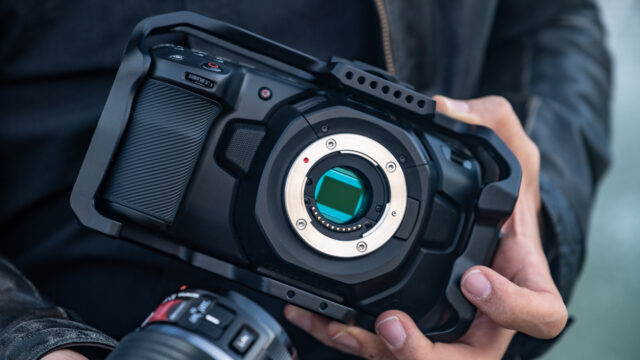 The Unicorn Is Here

Ever since its announcement at NAB in April this year, the Blackmagic Pocket Cinema Camera 4k has become the most-anticipated camera release of the year. We shot an exclusive interview with Blackmagic Design founder Grant Petty in Las Vegas, where he answered all of our questions about the newly announced device. Blackmagic promised to start shipping the camera in September – and for once, they somewhat managed to keep that promise. Very small numbers of the BMPCC 4K started being shipped out at the end of September, however they are still nowhere close to meeting demand. It seems like production has been somewhat slow, but at least by having had a press loaner for about two weeks we can confirm that it works, and it works really well.

What’s most striking about the new Pocket 4K is the fact that you need very big pockets. Just like Blackmagic’s URSA Mini was never “mini”, the Pocket 4K doesn’t fit in a pocket. Compared to its predecessor, the very popular Blackmagic Pocket Camera camera, the BMPCC 4K is very large. However, that is thanks to a gorgeous 5 inch multitouch display at the back of the camera. It’s 1080p and brilliant in every way, particularly for a camera that costs so little. It’s super easy to judge focus and the controls are very responsive. What’s missing is a viewfinder, which means loupe adapters like Zacuto’s Z-Finder might have a renaissance. However, as you are required to use the screen with your hands, such a loupe might prove impractical because you will have to take it off constantly in order to be able to control the menus and change most settings. So that only leaves you with adding an external viewfinder to this camera when working out in sunshine (where you really can’t read the screen well).

While the screen is really nice and very responsive to any input, it’s unfortunate that Blackmagic decided against a floppy screen or even just a tilt screen – especially because there is no viewfinder as an alternative whatsoever. Very often you find yourself bent over backwards with this camera when you are shooting with it alone without assistants. 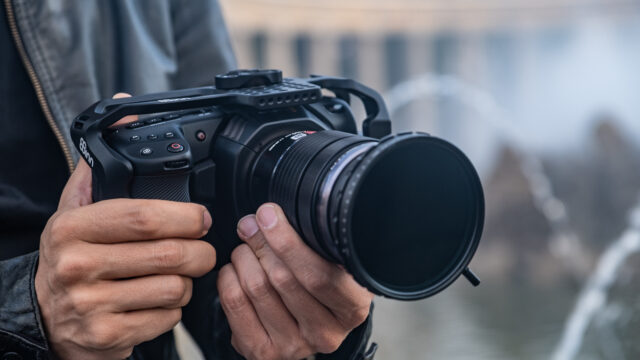 The BMPCC 4K feels good in the hand when you have large hands like me, but I know that some other people will have a problem with the hefty grip of the camera.

There are two microphones left and right of the lens mount which should in theory bring nice stereo sound, however you find yourself touching these microphones all the time when holding the camera, because they are not ideally placed. However if you are aware of it, it’s of course much easier to avoid doing when filming.

In terms of menu design, Blackmagic Design is still my personal champion … the menu is so straightforward and easy-to-use that you really never need to touch a manual or anything like that. When you see camera menus like this, you start wondering why all the other (mostly Japanese) camera manufacturers never managed to make straightforward menus where you can actually find stuff more easily.

The BMPCC 4K uses Canon LP-E6 type batteries. The same standard as the 5D Mark II and III, and many many other popular Canon cameras. This is a nice move since it means that you can continue using your old batteries.

However, the power management of the camera seems to be quite poor. At random times below 20% charge, the camera actually simply shuts off without warning. Also, a battery also typically only lasts 35-45 minutes, which isn’t long at all.

We recommend using an external power solution like for example the Core SWX Powerbase EDGE with a dummy battery, which can last you many hours, if not a full day! It makes your footprint with the camera bit bigger, but also more powerful and reliable. 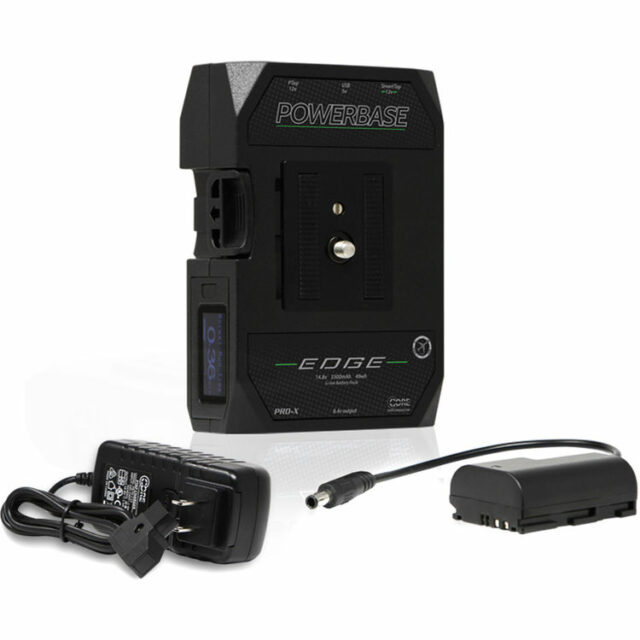 The BMPCC 4K comes with a MFT sensor that is supposed to be quite light sensitive, with a dual ISO of 400 and 3200. In my video test I could verify that these two ISO values were indeed the two with the least amount of noise in the picture. If you are aiming for high quality images, I would not shoot beyond ISO 6400, however I think it’s totally acceptable to do so for documentary or other reality content. The noise of the sensor is quite pleasant and should be fairly easy to get rid of using de-noise in DaVince Resolve (which, by the way, comes for free with the camera in its Studio version – the normal version is free anyhow).

This camera is miles better than the original Pocket camera when it comes to low light, and it’s a lot better than many others in the market. During the shoot of the intro of this review, we were losing light rapidly as all of this was shot after sunset in the woods. With a 25mm MFT f/1.2 lens from Olympus, I was able to get exposure by increasing the ISO progressively, with the lens always wide open. As you can see above, even the ISO 16,000 shots are tolerable, albeit noisy. 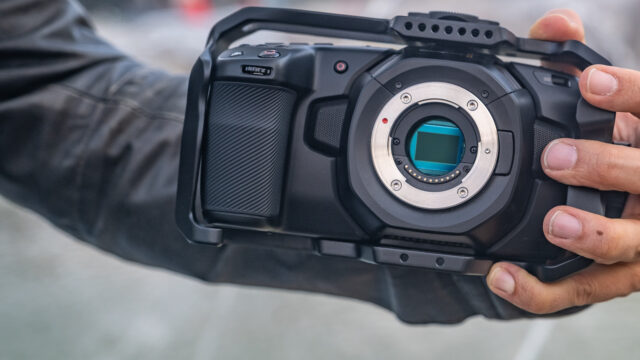 What sets Blackmagic cameras apart is the fact that they record RAW and various flavours of ProRes, as opposed to highly compressed proprietary codecs like most other manufacturers. That means 12-bit RAW recorded internally in a camera, and that is a big deal – especially at this price point.

The Pocket 4K cannot record in Blackmagic RAW yet (we have reported about it in an interview with Blackmagic here), but it records RAW in DNG sequences (which is of course data intense!) However, the RAW images end up being 12bit, while ProRes HQ is only 10-bit (which is still much better than what 90% of professional cameras in the market can do).

What’s impressive is the capability to record up to 60fps in full quality in 4K. Only when you want to go even higher with your frame rates, you have to switch to 1080p and activate a dedicated “sensor crop” button. Under that sensor crop, you are then able to record 120 frames per second. 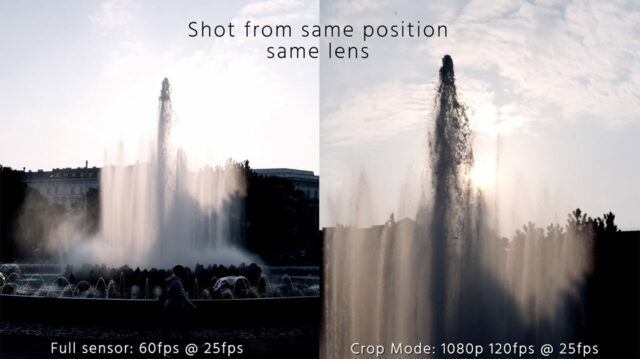 Our technical expert Gunther Machu ran a couple of cinema5D Lab Tests with the BMPCC 4K before it had to go back to the manufacturer. Before you read on, in case you haven’t read it yet, please look at our recent article explaining the methodology of our lab tests – here’s the link.

Interestingly, when we tested the same DCI 4K 25p RAW (1:1) we found that the dynamic range reading was lower (by about a half stop). Only when we selected the “highlight recovery” option in DaVinci Resolve and then exported frame grabs into IMATEST we got similar results to ProRes.

This is a bit strange, because we tested also the old Pocket Cinema Camera and it had the same dynamic range reading in ProRes and RAW – and when we enabled the “highlight recovery” option in Resolve, we actually got about 0.6 stops higher DR in RAW that with ProRes.

How come that the DR of the new Pocket 4K is lower in RAW, and only matched ProRes when “highlight recovery” is selected in Resolve? Is ProRes doing this HL recovery automatically?

We reached out to Blackmagic Design, and received a reply very promptly:

Reply from Andy Buckland, Blackmagic Design (after a call with Gunther Machu):

The Pocket Cinema Camera 4k uses our new demosaic algorithm developed with Blackmagic RAW, before encoding to ProRes. This new algorithm helps to reduce noise and improve the dynamic range in ProRes capture. With Cinema DNG RAW, the demosaic is still performed in DaVinci Resolve. That enables full control and manipulation over debayer settings, noise reduction, and highlight recovery to increase the dynamic range measurement beyond that of ProRes.
By applying minimal temporal noise reduction to the Cinema DNG RAW files in DaVinci Resolve – the lower steps on the waveform can be cleaned up nicely, bringing the available dynamic range of RAW in line with those seen in your ProRes tests. Then by enabling highlight recovery, the available dynamic range in Cinema DNG RAW increases beyond that of ProRes.
ProRes users benefit from the new debayer algorithm in terms of dynamic range and reduced noise at capture, resulting in a faster turnaround.
RAW users benefit from the full control and manipulation of the image, to decide which parameters they would like to tweak and finesse.

There are many more things to say about the Blackmagic Pocket Cinema Camera 4k, but please do watch the video if you haven’t seen it yet, as many things are covered there in more detail. Blackmagic really did their homework with this one and listened to as many customers as possible when designing the successor to their original Pocket Camera. The image out of it is beautiful and “cinematic”, the dynamic range is better than the one of similar cameras in the market right now, and it’s just very enjoyable shooting with it. It’s not a perfect camera of course, but it has a lot to offer. I can’t wait to took a much closer look at the camera soon.
The music used in the video above is courtesy of Music Vine. Get 25% off your next music license with code C5D25 (valid for one use per customer).
What do you think about the BMPCC 4K? Did you pre-order one, and are you still waiting for it? Please let us know in the comments below.
blackmagicdynamic rangemftlowlightBlackmagic Cameralow lightBMPCC4KBMPCC 4KBlackmagic Pocket Cinema Camera 4KPocket 4Kmft camerablackmagic pocket 4Kblackmagic pocket
Share this article
Share this article