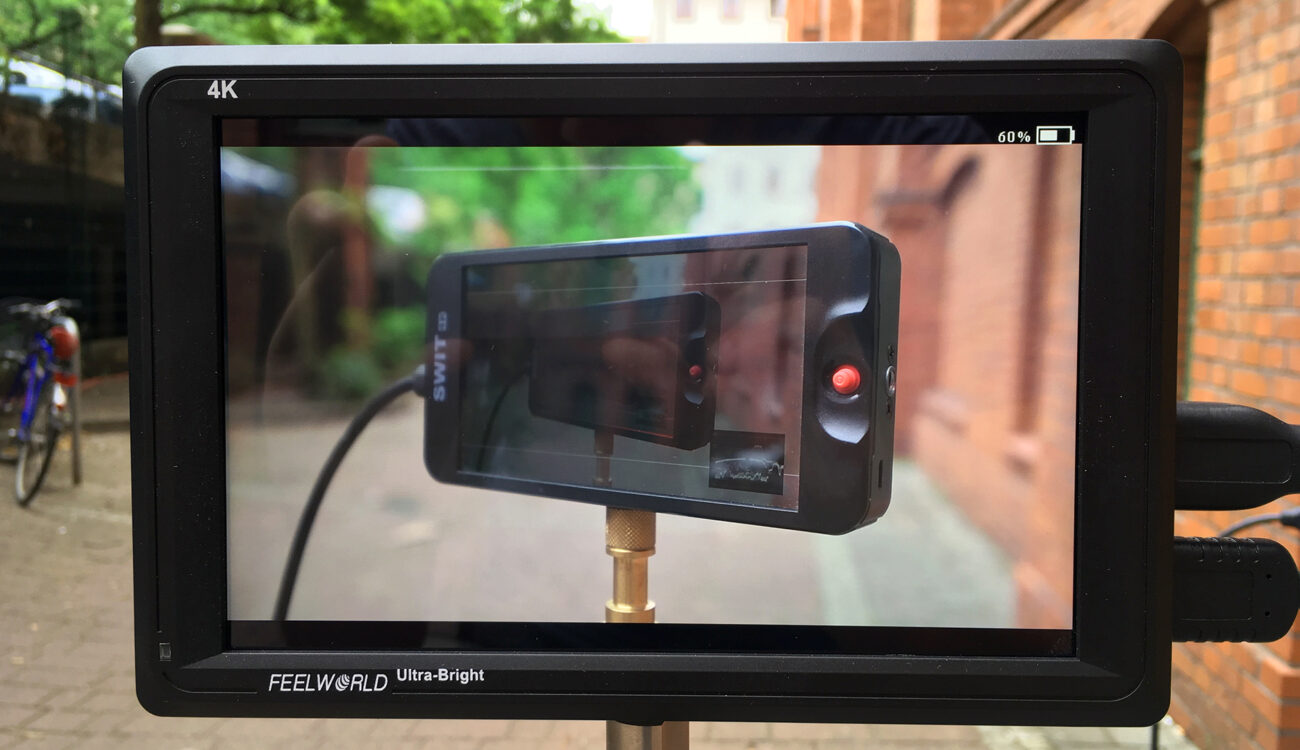 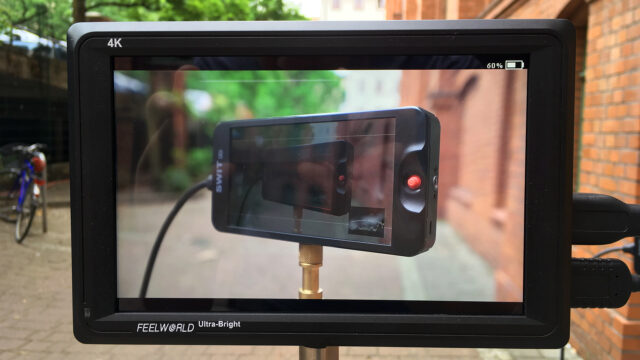 A camera is nothing without a monitor. Since the analogue, pure optical, days are gone, we need some kind of EVF or on-board monitor in oder to see what the camera is doing. This is a crucial part of our camera system of choice and that’s why EVFs tend to be pretty expensive. On-board monitors, on the other hand, come in a wide range of sizes, features and price tags. Whether you need an additional on-board monitor for your director, your AC or for yourself might boil this list down a little bit but in the end you have to make a choice. For me the choice was price vs features. I needed an affordable, yet feature-packed LCD for my Ronin-S gimbal. Since both, the FeelWorld FW279 and the SWIT are well under $300, I thought it might be a good idea to compare them. Read my initial thoughts about the aforementioned SWIT CM-55c here.

Two buzzwords speak for this FeelWorld model in comparison to the SWIT. It’s 7″ rather than 5.5″ and it sports a 2200 nits display which might be a good choice when shooting in bright sunlight. Bright and big, but is it any good? For me personally, the size of the SWIT is a better fit for the Ronin-S, which is already pretty big on its own to be honest. I don’t really need a 7″ screen for that since I’m mostly pretty close to the screen while operating the gimbal.

2200 nits in comparison to 450 nits might sound amazing but in reality I found that the 450 nit SWIT is sufficient for my work. Make no mistake, The FeelWorld is certainly much brighter but the screen is also super reflective which makes it hard to work in direct sunlight. The Swit comes with a flimsy sunshade but it’s better than nothing, at least for me. I prefer attaching a sunshade rather than a super bright yet reflecting screen. The SWIT’s sunshade is not great but at least you get one.

The FeelWorld neither comes with a sunshade nor with any kind of mounting bracket for one.

The image looks good on the FeelWorld, it has very little input lag and the colors look accurate to my eye. In bright sunlight, the 2200 nits play well above the 450 nits of he CM-55c but as stated above the screen itself is pretty reflective so it’s still a bit hard to see what’s going on while out and about. A sunshade would have been a great addition I think.

Mounting an articulating arm to the FeelWorld FW 279.

Both Monitors are HDMI only (There is another FeelWorld model with SDI in/out, but it’s over $300). The SWIT only offers a HDMI in while the FeelWorld has a loop-through, too. It also comes with a headphone jack and, I really don’t know why, a speaker on the back of the unit. Why would anyone want a speaker in their on-board monitor? It took me a while to figure out how to turn the volume down to zero because the speaker started to emit horrible feedback noise once it was connected to the camera and therefore to the built-in microphone.

The SWIT does sport a headphone jack but there’s no speaker to be found. Good. Furthermore the SWIT allows for either Canon LP-E6 or Sony NP-F batteries with its two-way battery compartment, which is pretty cool I think! 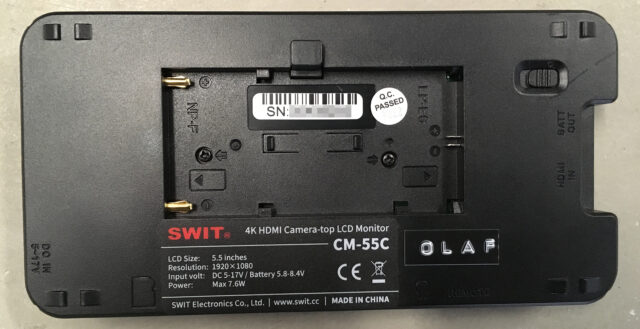 You also can juice another device with the battery attached to the SWIT, for example your camera. You just need a DC coupler which fits your camera and a cable to connect the coupler to the SWIT. The power output is not regulated, though, so make sure to check your cameras power input requirements before connecting it.

A maybe minor thing is the dedicated on/off switch on the back of the SWIT. I’m highlighting this because the FeelWorld comes with 8 buttons on top of the unit and one of them is the power button. Press it once, even just for a split second, and the monitor will shut down. Or, maybe even worse, it might power up in your bag if a battery is attached to it and that button gets accidentally pressed.

Speaking of power, the FeelWorld is powered by either a Sony NP-F battery or a DC 12V input via a standard barrel connector. The battery plate seems to be swappable but I couldn’t test this. On the top plate of this monitor there are 8 buttons in total: The aforementioned power switch, 4 arrow buttons, 2 custom function buttons and a menu button. The arrow buttons are for navigating the menu system and this is a bit of a painful process. The menu system itself is pretty rudimentary and you will have to gain a lot of muscle memory in order to navigate it with these 4 buttons without looking.. I accidentally switched off the screen more than once. 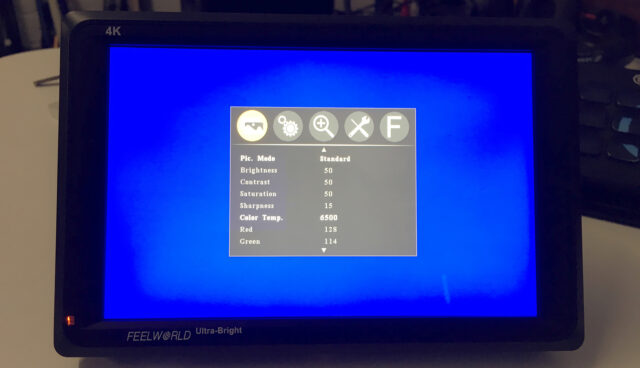 It might not look pretty but it does the job. You can customize values like color temperature, brightness, saturation and red or green gain for example. It’s all there but sometimes it’s a bit hard to get there.

Since the FeelWorld sports a massive 2200 nits I found it interesting to check the battery life when set to max brightness (which is way too bright for indoor shooting, by the way). With an Atomos 5200mAh /38.5Wh NP-F style battery I could power the unit for just under 2 hours.

The SWIT consumes only 5.5W in comparison to the 18W of the FeelWorld so you can run it forever with just one battery. Both units get pretty warm, the FeelWorld gets almost hot I would say. 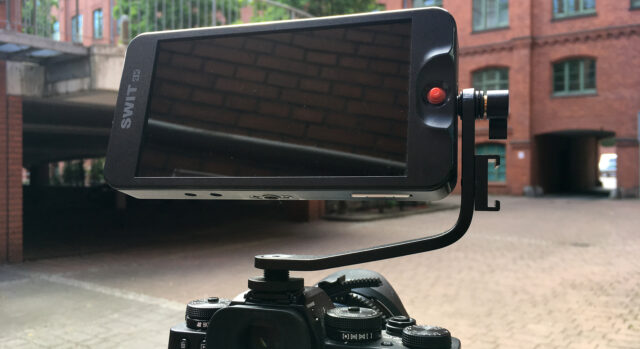 The SWIT only has one knob (plus the power switch on the back). That know is a four-way joystick plus a button. It looks quite similar to the SmallHD 500 series. Once we dive into the software, you’ll know why. Right next to the joystick there’s the second 1/4-20 mounting point. With it you can make use of the supplied swivel bracket for mounting the SWIT on your camera’s hot shoe.

What’s even more important is the software running the screen. And in that respect the FeelWorld really feels a bit cheap. As stated before the menu system is really rudimentary. It’s all there but it feels as you are operating some DOS on your computer from the 90’s. The SWIT is way more intuitive although the joystick, especially the center button, is a bit wobbly sometimes.

One major difference between both monitors is the SWIT’s ability to load LUTs via SD card. The FeelWorld LCD doesn’t sport a SD card reader and it doesn’t support LUTs whatsoever. That’s a bummer!

The SWIT comes preloaded with a lot of Log->Rec.709 profiles for different cameras but you also can load your own LUTs of choice. Just like the SmallHD 500 series you can create pages with different sets of tools. For example you set up one page with 2.35:1 guides, peaking and 95% zebra, another one with just a LUT and another one with false color for checking exposure. Once the pages are set up you can flick through them with the joystick.

The FeelWorld does offer these tools, too, but you have to come back to the menu system for each and every change. The only exception are the two F keys which can be assigned for the two most common tools, just like peaking or histogram.

In order to compare these two monitors we need a few numbers. These are the most important specs of both monitors:

So spec-wise these two monitors are not too much apart from each other, really. You just have to choose what you need. If you need a super bright, yet lightweight and relatively cheap, monitor for outdoor use: Go with the FeelWorld FW 279. If you need LUTs and 5.5″ is sufficient for you: go with the SWIT CM-55c. You want both? Go with the new SmallHD series 7 monitor, for example.. But that one is 7 times more expensive than the FeelWorld. You get what you pay for.

Both monitors offer a bunch of software features in order to judge your image, of course.

I personally like the SWIT CM-55c very much. It’s lightweight, it’s feature packed, it’s cheap and it’s perfect for my Ronin-S. The FeelWorld 7″ would have been a bit too bulky for that, I think. Plus, it lacks support for LUTs and that’s essential for me. When shooting with my FUJIFILM X-T3 I set it to F-Log recording all the time.

I don’t really need a loop-through HDMI but it would have been nice to have. It’s all about making choices and my choice is to use the SWIT rather than the larger and brighter FreeWorld.

Both monitors lack built quality but that is understandable regarding the low price tag. The aforementioned SmallHD series 7 is a far superior monitor, no doubt about it but you will have to pay for that supremacy. An on-camera monitor should match the hosting camera and in the case of my FUJIFILM X-T3 the SWIT is a perfect match, in regards to both, features and price tag.

What kind of on-board monitor do you use? Share your experiences in the comments below!