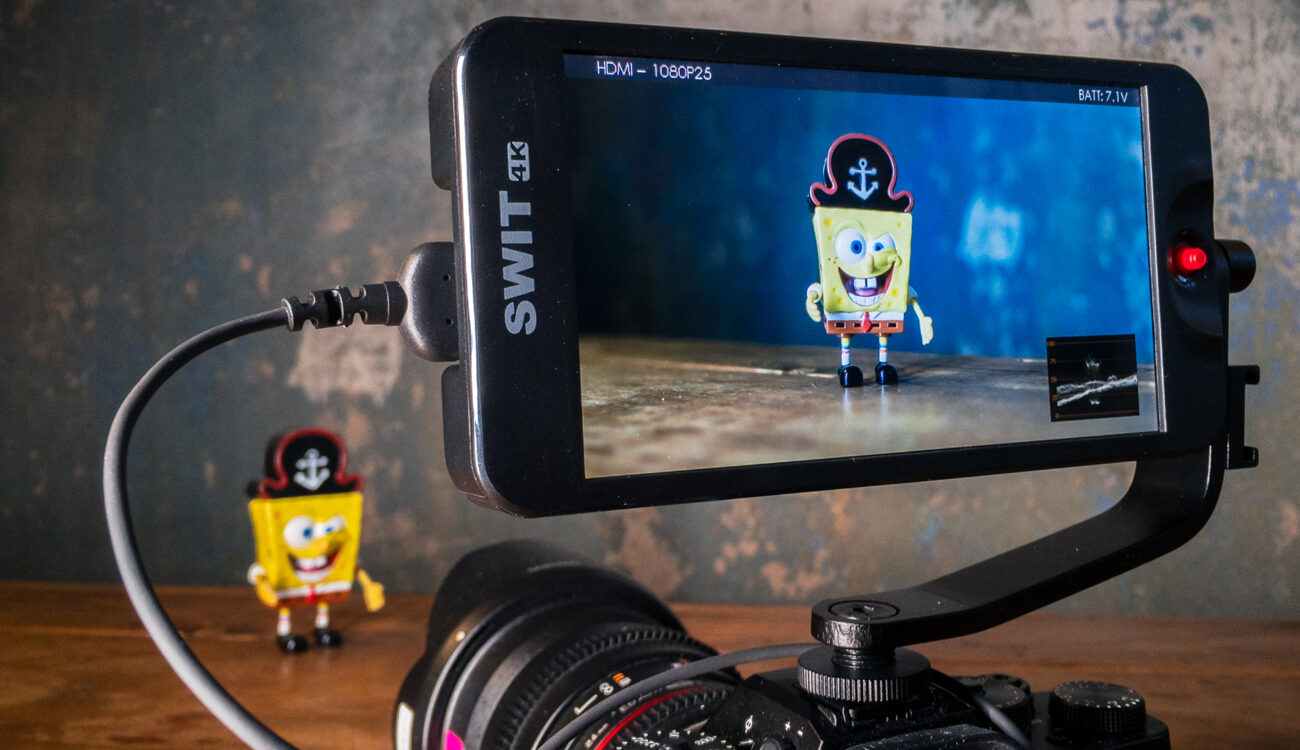 SWIT have announced a few new products back at IBC 2018 in Amsterdam including a fresh 5.5″ monitor. the SWIT CM-55 C called device features almost everything you need for decent onboard monitoring for a mirrorless camera, including support for custom LUTs. And it’s priced very competitive, indeed. 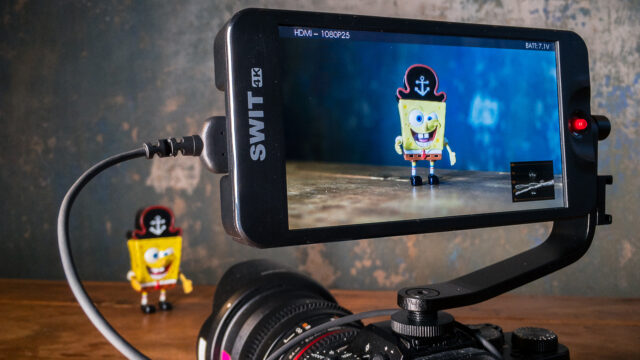 What are you looking for when it comes to a versatile onboard monitoring solution? For me, three things stand out: Image quality, features, weight. You don’t want to mount a giant 3 lbs monitor to your shiny new 1.2 lbs Fujifilm X-T3, do you? 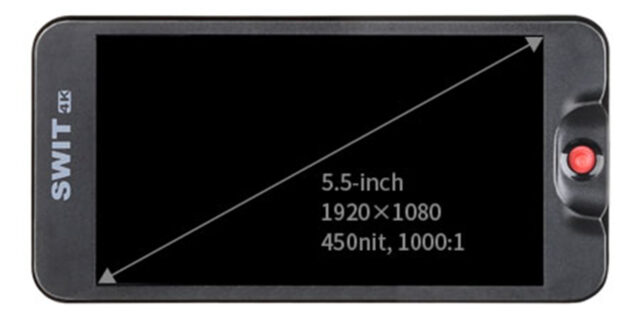 I actually did receive a unit just today and I’ll update this post (or even better: put together a proper review) once I have played with it for a little while. The reason why I bought this SWIT CM-55 C right away? It has the right size for me, it’s lightweight, it comes with a ton of features and it’s actually very affordable. In Germany, it’s about €199 + VAT.

The whole unit weights only 0,35 lbs (160g) and it’s 6.1 x 3 x 0.8″ (156 × 78 × 20mm) in size which is perfect for any mirrorless camera. It looks quite similar to the well-known SmallHD 502 line of monitor, it even features a similar looking 5-way joystick. The SWIT CM-55 C is controlled entirely with that joystick, the only other control is the on/off switch on the back of the unit. 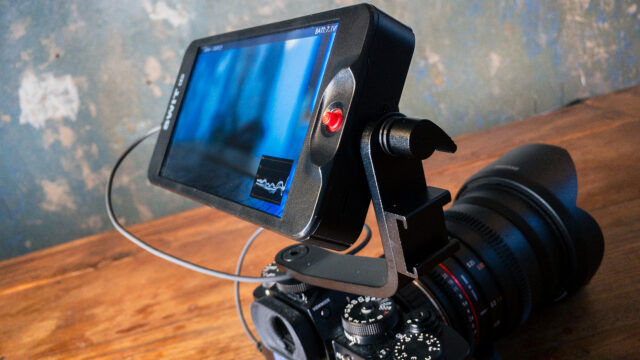 A cool thing is the dual battery slot on the back. You can attach either Canon LP-E6 style batteries or Sony LP-F style batteries. Your choice entirely. Furthermore, you can use a phone charger or power bank (anything from 5 – 17V, min. 1.5A) and feed the monitor via micro USB

As with many lower priced monitors, the SWIT CM-55 C only features a HDMI input, no SDI whatsoever. There’s no option to loop the HDMI signal through, either. It’s just one standard HDMI-A sized input and that’s that. It supports video resolutions up to 3840 x 2160p UHD @ 30 fps. 1080p is supported up to 60fps.

The connector next to the HDMI input can be used to power your camera through the monitor itself. The standard barrel connector acts as an additional output to the attached battery, 7.4V that is. You can get the SWIT CM-55 C bundled with a dummy battery for your given camera or just get one yourself. 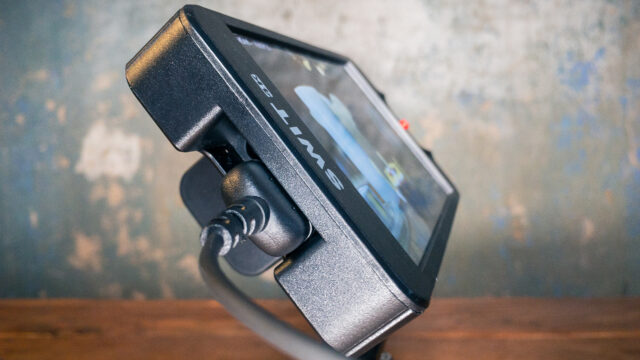 The monitor comes with a handy L-shaped tilt arm for attaching it to your camera’s hot shoe and the arm provides another cold shoe for attaching accessories such as a microphone or video light. It’s not as good as the arm you get along with a SmallHD Focus monitor since it tends to get loose when you tilt the monitor, maybe I can DIY it a little bit so it performs better. 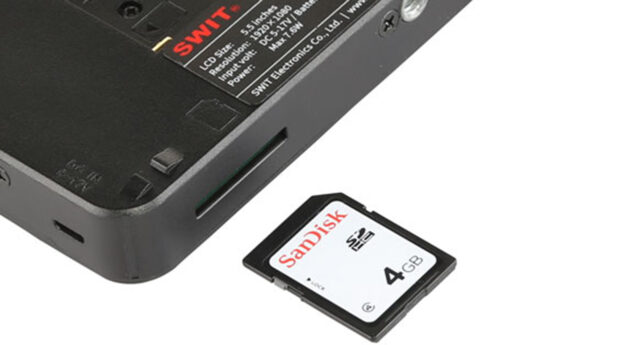 Furthermore you get a sunshade which will come in handy when shooting in bright sunlight. While 450 nits is not bad, it’s not sufficient for shooting in bright conditions. Unfortunately, the sunshade is rather poorly build but it’s better than nothing. It is basically a piece of plastic with two rubber fasteners on the sides.

If your camera doesn’t feature a headphone jack for monitoring audio, the SWIT CM-55 C does have one, so you can monitor 2 channels of audio provided through the HDMI signal.

When it comes to software features for an onboard monitor these are the most important ones (at least for me):

The good news is: The SWIT CM-55 C does it all. It supports R/G/B 3-color focus peaking, waveform/vector scope/histogram tools, false color, zebra with adjustable threshold, 2-channel audio metering (through HDMI) and LUTs (both pre-installed and custom)! Support for LUTs, especially custom ones is a rare feature to be found in lower end monitors. You can load up to 16 custom via SD card through the built-in SD card reader at the bottom of the unit.

If you are familiar with LUTs and waveforms, you’ll want to know which signal the waveform is analyzing, I’m sure. And I can confirm that it’s actually measuring the incoming LOG signal rather than the overlying LUT. So you can look at the beautiful Rec.709 image through a LUT of your choice while still being able to check for correct exposure via the waveform. Neat! 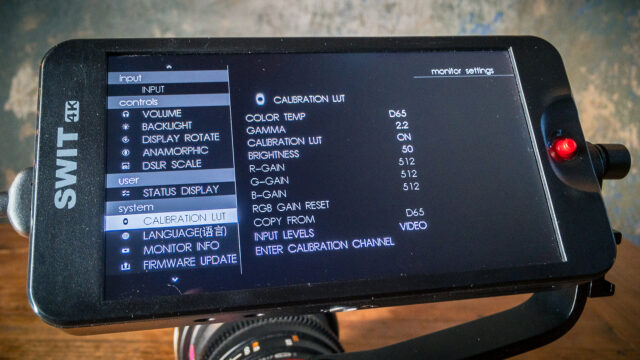 Just like the SmallHD 500 series, this SWIT CM-55 C monitor lets you create several scenes to flick through with the joystick. Every scene can be configured exactly to your liking. One page with false color and aspect guides enabled, one with only focus peaking turned on, one with a LUT and another one with only a crosshair in the middle? No problem. Eight scenes can be configured in total, each containing up to 8 individual tools.

The obvious comparison between the SWIT CM-55 C and the SmallHD 500 series of onboard monitors will only allow for one clear winner: The SmallHD is 5 times more expensive and you know why once you have one in your hands. It’s solidly build, it has HDMI inputs and outputs including cross-conversion to SDI (yes, there’s a SDI input, too). Plus, SmallHD did all the pioneering efforts regarding the innovative page layout UI.

The SWIT CM-55 C lacks a little bit on build quality, I hope the joystick will last for more than just a little while. The whole unit is made out of plastic which results in a nice lightweight monitor but it doesn’t feel as solid as the aforementioned SmallHD. At all!

Is it worth it? Absolutely! It sells for a fraction of the price and in that regard it is really feature-packed. My personal aim is to use it on a gimbal and as an onboard monitor for my Fuji X-T3. Speaking of gimbals, what I really miss is a 1/4 20 mounting point on the top of the SWIT. Only two mounting points, one at the side and one at the bottom can be found on the unit. Good thing that you can rotate the screen via software! 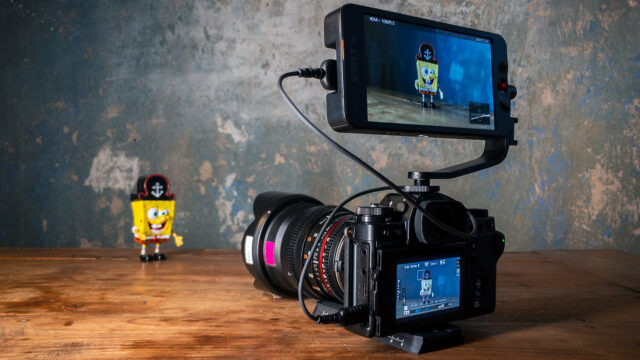 The SWIT CM-55 C might seem to be a little bit of a low-cost copy of the higher end SmallHD monitors and I hope that SWIT are adhering to current patents here. Other than that, this seems to be a legit monitor at a very affordable price and a great feature set.

What do you think? Are you in the market for a new affordable onboard monitor? Or would you prefer the real deal (aka SmallHD 500 series)? Share your thoughts in the comments below!