Here at cinema5D, we take education very seriously. We acknowledge our responsibility to share knowledge and information with our readers. As such, we promise to do our best and try to come up with a future plan that will benefit our followers most.

Until that happens, I was fortunate enough to be asked by my cinema5D partner and friend Nino Leitner and our colleague Philip Bloom to join and be a part of their amazing team of tutors who conducted one of their 3-day intensive Filmmaking Masterclass, which took place during October 2015, an hour away from London at Wotton House in Surrey. This is the first time in three years that Philip and Nino have conducted such a 3-day Filmmaking Masterclass – for past reports and results of other Masterclasses in Mallorca, Las Vegas and Key West, Florida, head over to Nino’s or Philip’s blogs. 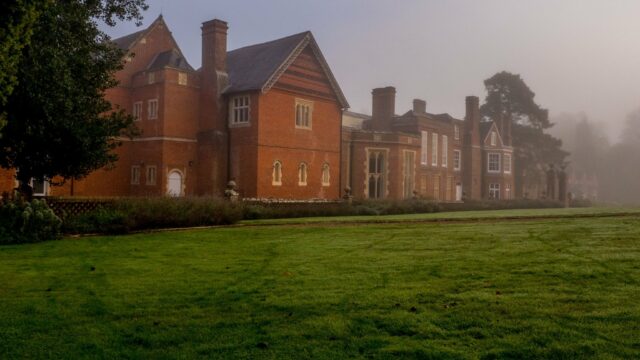 Personally, I would not advise young filmmakers or others who would like to work in the TV industry, to spend their time in film schools. As students are sitting in a classroom whiling their days away, other potential filmmakers are in the real world gaining valuable experience. Furthermore, the harsh truth is that in this industry—when it comes to the basic ability to see the world in a way which can be translated into valuable, visual storytelling—it’s often the case that you either “have it” or you don’t.

Others will disagree, of course, but this opinion comes from extensive experience. Anyway, moving on!

While film schools are a no go for me, workshops are a big fat yes! There’s no better way to enhance your skills, get new perspectives, meet working colleagues and sharpen your senses than joining a masterclass. Before I continue, I must admit that conducting a workshop and leading a team of talented professionals or aspiring hobbyists is as valuable for me as it might have been for them. The feeling of connecting a group of individuals and bringing them together to come up with a “product” that we all can be proud of, is truly second to none.

In this specific Filmmaking Masterclass, the main aim was to learn how to create a corporate video. Our class was split into 4 groups and each was given a specific related topic (ours was “Romance”). The film length was dictated to be up to 2 minutes and two versions were required— a different ending, a plot twist, or even a complete second video were options.

I was fortunate enough to have Tim, Hamza, Chris, Ronn, Robert and Marcin in my group. Some are professionals with a variety of filming and editing experience, some are from the photographic world, and others are very advanced prosumers who love the idea of being able to express their artistic desires. Regardless of background, they all had one thing in common: passion! You should have seen those guys going through the process of planning, shooting, editing, grading, and delivering their creation just in time. Needless to say that in my eyes, their creation was the best and most relevant to the “job description” project out of the 4!

Many of the participants already told us during the first day that teamwork is a strange thing for them. Most were freelancers like us who learned with time to “only trust themselves”. That’s why the challenge of creating a common working basis as a group proved to be challenging—but absolutely doable. As a tutor, I felt that my responsibilities were to make sure no one stays disconnected from the group and to “navigate the boat” from behind. I guess it is a learning process that every mentor must go through as it is in our DNA to jump in and want to change the frame of the shot, edit the sequence, choose the music, and grade the end result according to our personal taste. However, when you teach, you have to remember that the team needs to do all of this alone and that mentoring requires guiding, rather than doing. All in all, the process of creating is a fascinating one. Watching the team creating a problem and then solving it was enlightening! 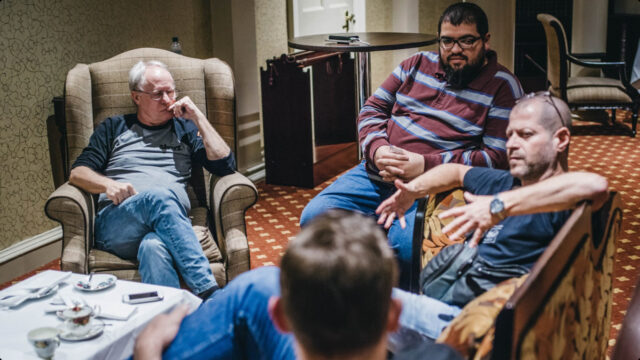 As the time given to produce a proper concept was only a few hours and the day after was dedicated for shooting, proper planning was a must. While others took the time to look at the amazing gizmos which were supplied by one of the Filmmaking Masterclass sponsors (CVP and Røde), I was guiding my team to ignore any given equipment and concentrate on the storytelling first. The pre-production session was a bit of a painful one and had the usual curve of coming up with a good idea first, then smashing it all together—followed by securing a proper storyline which was to the whole team’s liking. For our short “romance corporate video”, we decided to create a story with 2 internal parts. In simple terms, a “happy” one followed by a “sad” one.

The differences between the 2 parts would be enhanced by 2 different shooting styles (handheld vs locked tripod), colour scheme (warm vs cool), perspective (closer to the actors vs fixed and somehow distant frame). To make the break between those 2 moods, we decided on an obvious cut. Something to establish that “something went wrong with the relationship”. 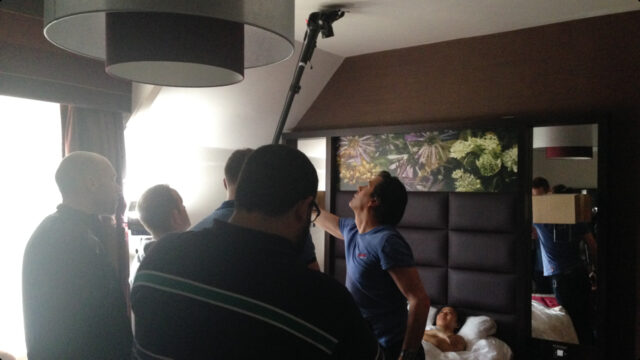 The next day started on the wrong foot as our (very talented) actress was a bit late on set due to trafic. The reason I’m mentioning this is because of the limited shooting time we had — considering that after 16:30 in autumn, Britain is pitch black. We managed to catch up with schedule later on as we had utilised our planning time the previous day well and shot with utmost discipline.

One of the requirements set by Nino and Philip was to rotate the tasks between team members during shooting and if possible, the editing process. Potentially, this kind of request can lead to a disaster during the creative process of any project, so it was nice to see how the people within the team supported each other so well that in the final footage, you cannot tell that the tasks were split between five different people. The only person I instructed NOT to change was our producer. I needed someone capable and motivated to do the job—and to watch the clock! When the lights went off, we knew we’d managed to get it all. We didn’t even require additional shots on any of our takes! Okay, there was one, but it was in slow motion so it doesn’t count! :)

Right after dinner, we gathered again in order to choose the very best take from every sequence we had, choose the music theme, write the voice-over (and even record it if possible) and generally plan the day of editing that would come next. This planning proved invaluable, as we only had until 14:00 the next day to present our masterpiece! 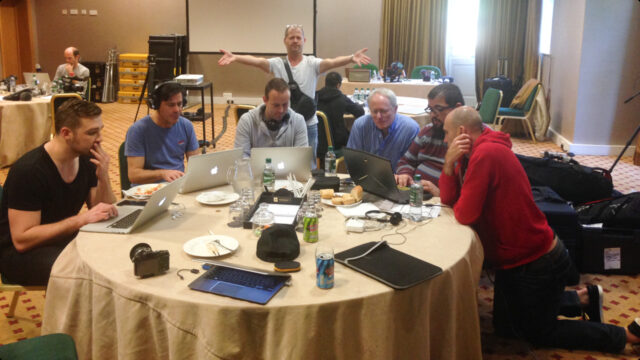 I have to confess that editing this project was not an easy task. It took more than expected to get “into the rhythm” and get it right but suddenly (with a bit of tutoring support), it “clicked” and everything fell into place.

Since people from the team had to rotate and leave the editing room to take part in a parallel lesson that was conducted by Philip, we had to rotate the project between 3 different computers (2 Mac’s and one PC). Adobe Premiere coped wonderfully with the task!

Rotation between editors and editing computers continued during the grading process too, as not all computers performed the same when it came to installing LUTs, screen quality, and the power required to export the project fast.

Finally, the time to give the finished video file to Philip arrived. Team after team presented their project and EVERY shot was analyzed, explained, and discussed. The other teams showed BEAUTIFUL footage and presented an amazing level of creativity. Some took the time to use the latest trends in the industry and made use of drones or gimbals.  Looking at the faces of my team I could feel the pressure. I guess that the question on all of their minds was whether our more traditional, static style had the ability to compete with today’s technology.

I don’t want to pretend that I was a prime example of relaxation at that moment but I knew we had done our best to stay relevant to the given job description. So while others showed a high level of execution, it was not always exactly what they were asked for, in my opinion.

It was only after screening our little film that we all got the colour back in our faces—fortunately, nobody took any photos of us until after that point as they would have required a vast amount of editing! It was great to hear all of the positive responses and it made me extremely proud seeing what a group of 6 total strangers can achieve in such a short time.

Well done team 4! A full credit list of the participants in the video can be found at the end of it.

So, a massive thank you to Caroline Sumners, Nino Leitner, Philip Bloom, Julian Wakefield, Adam Loretz, all the enthusiastic masterclass participants and team supporters, Adam Plowden and his BTS team for his beautiful behind-the-scenes video that you can see above —and last but not least, a big thank you to our event sponsors CVP and RØDE Microphones! 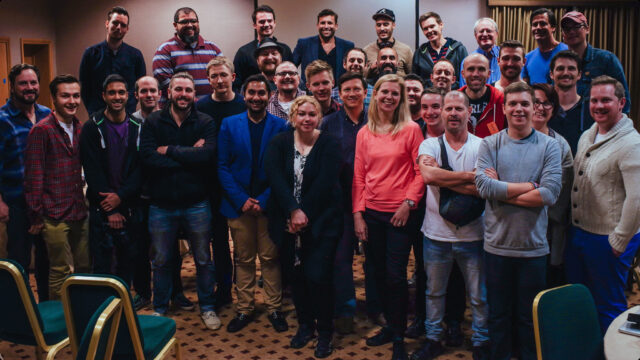 I hope the other group tutors Nino Leitner, Adam Loretz and Julian Wakefield will report about their experiences in separate blog posts.  Till then, enjoy the creative work done by their teams and watch the short films below: