In episode 24 of ON THE COUCH, I talked to Frank Mirbach, CEO of German production company Mineworks Film, Lawrence Richards, a director of photography from Germany, and David Stevens, CEO of Glidecam Industries, Inc. (thanks to AF Marcotec for hooking us up with David!!).

Frank talks about how he was among the first ones to order the RED One when it was announced, after watching a clip at IBC 2007 – and then having to wait for 1.5 years until the body arrived. That’s when his love affair with RED started, and he has shot and produced numerous documentaries for TV channels as well as the feature film “Real Buddy” on the RED platform since then.

Lawrence Richards studied directing in film school, ending up mostly shooting as a director of photography. He shoots a lot of TV stuff on C300 and other Canon cameras, producing a lot of corporate films and documentaries. He’s very proud of a charity production he recently worked on which led him around the world, supporting children in need. 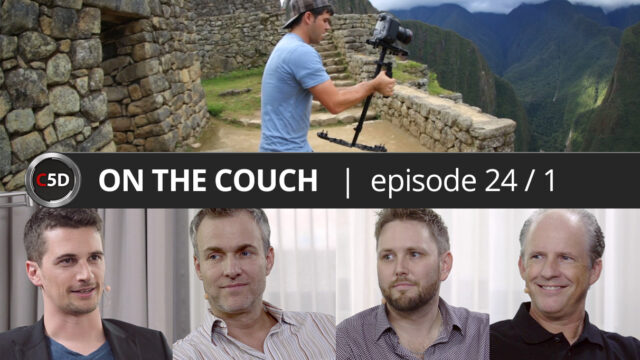 David Stevens is the CEO of Glidecam Industries and talks about the very first Glidecam that was made – out of wood. He talks about how they got the company started and how rudimentary everything around cameras was not so long ago – mostly for large camera rigs, because the small cameras weren’t any good at the time. Glidecam got started and became successful because unlike Steadicam, they had smaller, more inexpensive rigs earlier on, and they didn’t require as much training, according to David.

David mentions Devin Graham from the ultra-successful YouTube channel “Devin Supertramp”, who uses Glidecam products to shoot many of his videos.

In the time when the mechanical stabilizer market has slowed down because of gimbals like the MoVi and Ronin, Glidecam still offers 7 different handheld rigs.

David Stevens talks about the massive trend of gimbals and how it affects his business. Garrett Brown said that the high to low mode change is the only thing that can’t be done with the mechanical rigs like Steadicam or Glidecam rig. He also said they are not going into this market, because their stuff is much easier to maintain and support on a global scale. Also, he said their market wasn’t affected at all.

Then we moved on to talking about drones and multicopters and the legal implications of flying around with cameras.

At the end, we moved on to the inception of the digital cinema revolution with RED and Canon turning the market upside down – whether planned or not.

In the next episode we will talk about camera shapes and ergonomics, as well as 4K and the importance of impressing your clients.