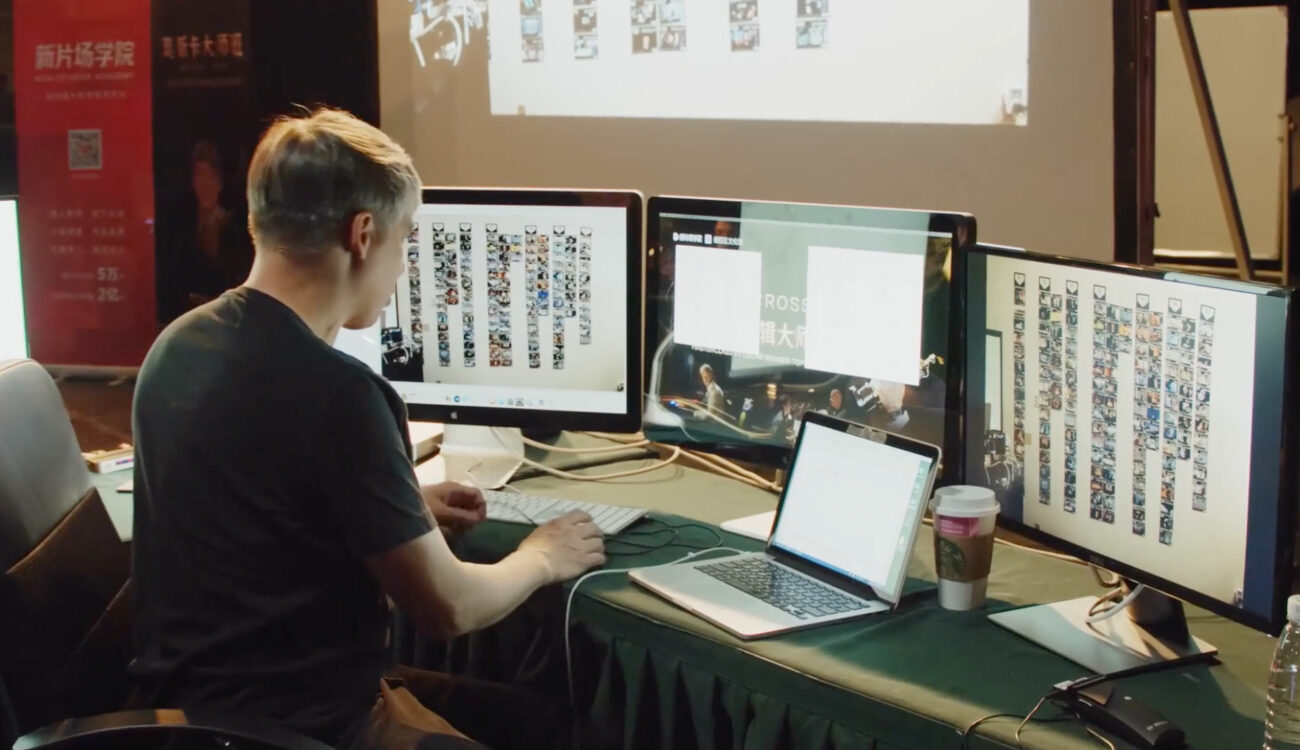 Every editor needs an organization system, whether you’re working on a feature film or a documentary project or even a music video. For many film editors, using wall cards is the difference between a good film and a giant mess.

In “The Art & Technique of Film Editing” course on MZed, educator Tom Cross demonstrates his system that he’s been using to organize films such as La La Land, Whiplash, and First Man. Tom won an Academy Award for his work on Whiplash, so let’s take a look at how a master editor approaches a film edit.

At the most basic level, wall cards are simply index cards that help visually organize a films scenes. Key information such as where the scene takes place, characters involved, and any director’s notes are enough to get you started.

Then throughout the editing process, you can move the cards around as you begin to visualize a better flow for the plot, continuity, and overall story direction.

A basic index card system will help you picture the whole movie. But you can choose to make it more informative by organizing your wall cards based on info you’re already tracking.

In this lesson of the course, Tom Cross describes how he uses database software like FileMaker Pro, but a spreadsheet will work just as well as long as you stay organized. The key is being able to re-organize the fields and create a set of wall cards that is helpful for not just you but also your co-editors, director, producer, and anyone else who has a role in the film’s creation.

For example, a producer may want to see a wall of cards that are organized by Reel numbers, showing which scenes are included in which reel. On a feature film, the editor may separate the movie into smaller portions – or reels – so that other departments such as sound and visual effects can work concurrently. There’s more information about Reels in another lesson of the course.

To improve his wall card system, Tom adds little 5×7 screengrabs from the film to represent each card. That way he can maintain a visual perspective on the whole movie, rather than only relying on little text on a wall.

As a film is being shot, he starts to replace the text-only card system with visuals that helps everybody envision the whole film. Simply choose an image that best represents the scene, print out a small version, and tape it to that scene’s wall card.

Tom says, “What I found is the directors use this as a tool. So to express their point, they’ll go up to the wall, and they’ll say, ‘What happens if we move this over there?’ They don’t even have to say what they’re talking about, they can just show me.”

He adds that this is not only a useful tool for directors, but producers too. They can describe their issues or questions about the story by pointing to specific scenes along the wall of cards.

Are Wall Cards Only for Feature Editors?

Screenwriters are known to use index cards to organize a story during the lengthy process of writing, and art designers rely on mood boards to pre-visualize a film’s look. But editors rely on metadata and follow the script, right?

There are many different approaches or combinations of methods to approach an edit, from logging shots to creating multiple timelines – in fact I’ve previously written about 5 Video Editing Workflows to Help Organize Your Footage. But Tom Cross is an Oscar-winning film editor, and he uses wall cards in addition to all the other organization methods, so if this system works for him, who can argue?

But what about if you’re not editing features? Can you still use the wall card system? Absolutely, and in fact at the very basic level you should be using sticky notes or some way of organizing a video story. It helps immensely to get out of the editing software and just play around with what you have on paper.

For me, when I started with documentaries I would use the Stickies app on my computer to summarize some key parts of subject interviews, and then move the stickies around until a story made sense. That was before ever touching the edit. Now I prefer to work with transcribed text and copy and paste the interview responses into a story edit in a simple text editor.

But whatever method of organization you use, it’s important to have at least some way to step back from your edit screen, even if you work alone and don’t need collaboration tools.

Learn All About Editing with MZed Pro

There are many aspects to learning to edit film or video, from organization approaches, to using specific NLEs, to coloring and delivering and more. With a subscription to MZed Pro, you can learn from a wide variety of filmmakers who each bring their own perspective on how to become a proficient editor.

As an MZed Pro member, you get access to this course as well as everything else on the platform, plus we’re constantly adding more courses. For just $30/month (billed annually at $349), here’s everything you’ll get:

Do you use wall cards or another method of organizing an edit project? Let us know in the comments below!