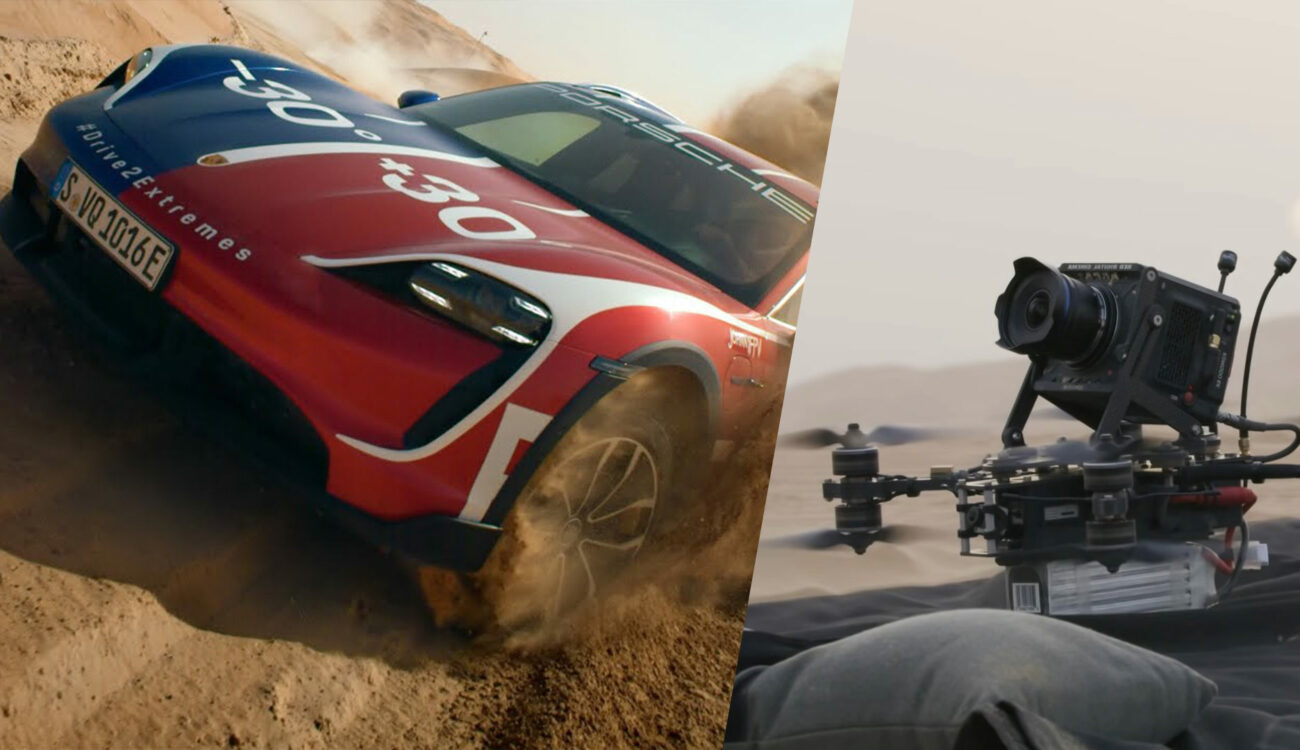 Johnny Schaer is one of the world’s most experienced FPV drone pilots. On top of participating in FPV quad races, known as Johnny FPV, this guy also runs a successful youtube channel. His popularity and skills recently landed him a very interesting gig. Porsche approached him to shoot a commercial for the new Taycan Cross Turismo. The result is very impressive and Johnny even produced a series of five additional behind-the-scenes videos where he talks a lot about the gear and techniques used to create the video. Let’s take a look at it.

In recent years, FPV aerial footage got very popular among video productions as it produces much more dynamic shots than flying with regular drones. What started with GoPros and naked GoPros a few years back, is now few steps further with large FPV rigs carrying cameras such as BMPCC 4K and 6K, RED Komodo, or even an ARRI Alexa Mini.

Another interesting (and relatively new) camera for FPV pilots is the Freefly Wave. Its unique feature is the ability to capture extreme slow motion. When the camera was launched in October 2020, I thought to myself that we will see it mounted on FPV quads very soon as it combines compact size and weight (716g body only) with unique slow-motion capability – up to 420 fps in 4K, or 1440 fps in 2K.

For this project, Johnny filmed the car driving around a snowy racing track in Finland with his FPV drones. What makes this video particularly interesting is that the production built an identical replica of the same track in the desert in Abu Dhabi. That is why we see the seamless transitions between snow and sand in the video.

Johnny used larger FPV quads that were carrying either a RED Komodo or the above-mentioned Freefly Wave slow-motion camera on them. Only one shot in the final edit was filmed with a smaller FPV quadcopter with a GoPro – the flight through the car’s window. As I mentioned above, Johnny created five short BTS videos explaining the different technical and creative aspects of this shoot.

The first BTS video covers the cameras and lenses used for the shoot. It actually only mentions the Wave although they also used a RED Komodo. With the Freefly Wave, the team chose to shoot in 4K 420fps. The lens used was not mentioned, but from the BTS footage, it looks like the Laowa 9mm f/2.8 Zero-D Sony E-Mount lens from Venus Optics. That would also make sense to still get wide-enough shots on crop sensors. The team also used other lenses, however. The drones that carried these cameras were larger 8″ and 9″ quads.

The second BTS video is about the snow-sand transitions. The idea was to make these cuts look seamless – kind of like in the 1917 movie. As Johnny said, some transitions were planned beforehand and some were just created randomly after going through all the footage. There was some VFX used for those transitions, but overall there is much less VFX in the video than one might think.

In the third BTS video, Johnny talks about the single shot in the video that was not made with the large FPV quadcopter – the flight through the Porsche’s rear seat windows.

He used a traditional 5″ quadcopter with a GoPro HERO9 camera. Given the difficulty of such a shot, Johnny, of course, crashed many times before nailing the shot and flying through both windows while the car was drifting through a long turn.

The fourth episode covers how the team protected all the equipment in extreme weather conditions. Especially the battery packs don’t really like extreme temperatures, but you still want them to hold that expensive FPV rig with the RED Komodo safely in the air.

Interestingly, they duct-taped the drones to prevent snow and sand from getting inside and messing up the electronics. That was necessary as the drone was constantly flying through flying snow and debris from the car’s tires. Many times, the team also had to clean the drone’s motors from snow or sand when crashing.

The last BTS video focuses on maneuvering the FPV drone in difficult situations. The first shot with the hot air balloon was captured with the RED Komodo and the Zeiss 14mm f/2.8 lens. Johnny talks about the difficulty on timing and maneuvering at high altitudes.

Do you fly with FPV drones? What do you think about this project from Johnny FPV? Let us know in the comments section underneath the article.