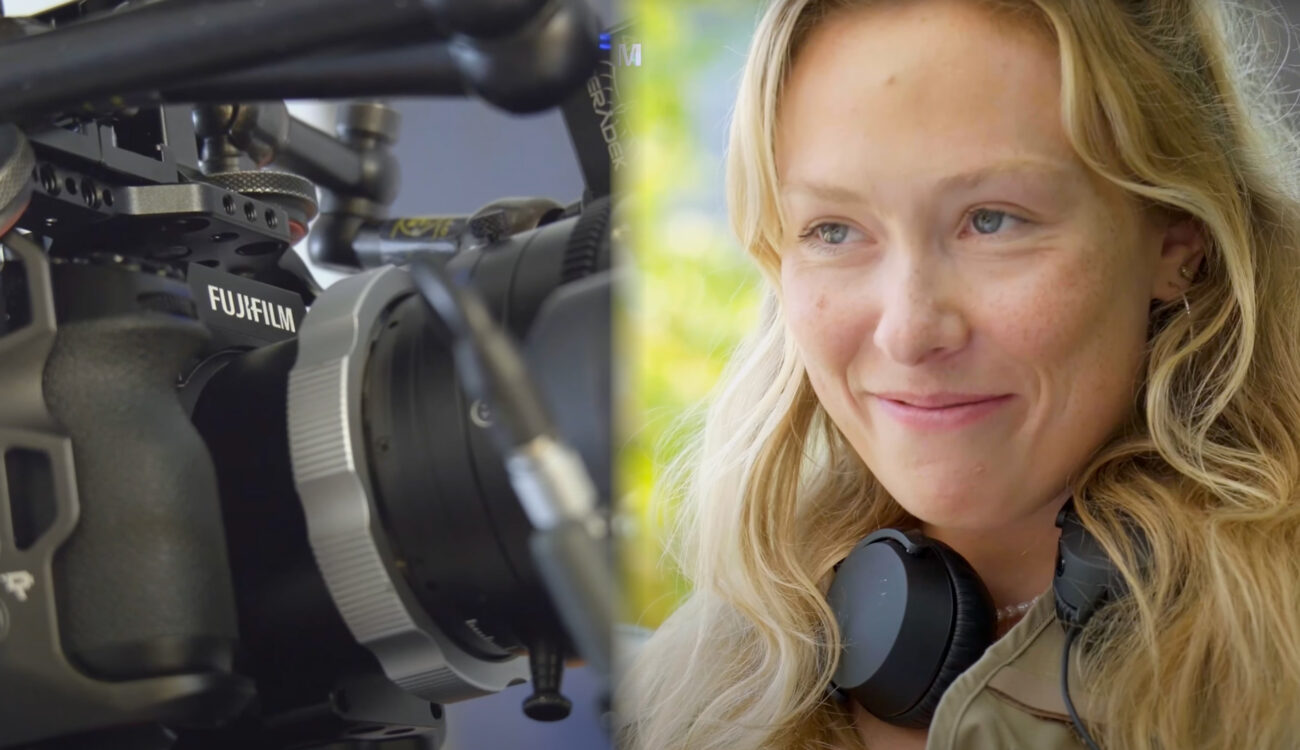 CineD is always searching for a way to connect creators and manufacturers – and, of course, to help filmmakers show their work. This is why we teamed up with FUJIFILM to show our filming community work that has been done with FUJIFILM cameras (click here to learn more and submit your story and work!). Please meet Gina Hackett, a US-based Screenwriter, and director. “In the Spotlight” is proudly sponsored by FUJIFILM.

For this FUJIFILM Spotlight, the piece Gina presents to us is a short film that plays a lot with tension and atmospheric moments. In short, the film is about a couple who moves into a new house, yet their perspectives are very different from each other. For him, it’s the perfect home, while for her, it slowly but surely turns into a nightmare.

The 8-minute film was shot in very long single takes using a Steadicam. Since the FUJIFILM X-H2 camera used allowed for 8K recording, slight reframing was possible in post-production. You can watch the trailer below!

In the Spotlight With FUJIFILM – Gina Hackett

Q: How did you get started in our industry?
A: Aside from watching Sofia Coppola’s Marie Antoinette a bazillion times as a teenager, I wasn’t really aware of cinema, so to speak, until college. I’ve been writing and even directing since I was a little girl—I wrote and staged a production of Cinderella as a kindergartner—but I wasn’t aware that such things were jobs. In college, I started channeling my post-adolescent angst into film classes and eventually made my way to a screenwriting workshop.

I was drawn to the practicality and lack of fussiness in the format; it was all about what you could see. But by the time I figured this out, I was already graduating from college. So I decided to attend Columbia University’s Film MFA program, where I found my collaborators, my point of view, and started working in the short film space. I’m so grateful for the chance to keep exploring this format even as I transition toward a career in film and television.

Current assignments:
At the moment, I’m taking Great Men, a limited series I wrote during the pandemic, out for development. I’m also working on two new series (one limited, one ongoing) that I hope to begin shopping next year.

What types of productions do you mostly shoot?
So far, I have directed exclusively in the narrative short film space, but I write mostly television and feature films.

What is your dream assignment/job in our industry and what are you really passionate about?
For me, writing and directing is a way of asking uncomfortable questions. My last short, Beauty Marks, asked questions about believing women, whereas The Appraisal is engaging with the subject of marriage and commitment. My dream is to create television that pushes for the uncomfortable questions and makes space for experiences outside our own.

Despite the dismal outlook afforded to streaming nowadays, I remain hopeful that television will continue to push boundaries in the way that film always has, and I would like to be a part of that journey.

In the work that you are presenting us, now that it is done, what would you have done differently throughout the production?
This project was my first time working with a Steadicam. Because I chose to shoot most of the film in one, roughly 8-minute shot, our talented operator had a Herculean task. And, being a newcomer to Steadicam, I didn’t account for the rig being incredibly heavy, meaning you can’t ask the operator to do one take right after another.

If I were magically transported back to set, I might have asked Kadri Koop, our talented DP, to take the camera off the rig for a couple of improvised, handheld takes. Probably, this would have presented its own challenges, but you never know!

What current camera, lenses and sound equipment do you use?
I’m between cameras at the moment, but I have my eye on an old camcorder. It’s been refreshing to watch those of my peers doing truly high-level work with the lo-fi equipment we remember from childhood.

You chose to shoot your project with the FUJIFILM X-H2 camera. Did you impose on yourself any limitations like not shooting with a tripod?
Since The Appraisal plays with a classic, almost Hitchcockian suspense, I felt that it demanded a present-tense, roving eyeball shooting style. We also had two days to shoot and some heavy-hitting talent that I knew could handle anything I threw their way.

As a result, I chose to shoot the film almost entirely in one shot, which was a challenge for everyone on the team. It demanded tons of rehearsal and ultra-precise takes. I’m used to working in a more verité style, grabbing shots wherever I can, so it was an exciting challenge to limit myself to one fluid shot.

What’s your favorite lighting equipment and why did you choose that kit over other solutions?
Since the story revolves around the interplay between two spaces, I chose a location with a lot of windows, meaning we had to let natural light inform the image to a great extent. Because we shot mostly in a oner, we only had about 100 degrees of space to place lights. The lights we did use, which were generously provided by Aputure, were placed strategically to create an airy, classic feel.

Do you use drones/gimbals in your productions? If so, what is the most effective way you’ve found of deploying them?
I’ve never used a drone or a gimbal. Even a tripod feels too encumbered to me — I like to be mobile.

What editing systems do you use and are you satisfied working with them?
I use Adobe Premiere. It’s very intuitive, perfect for a Luddite director like me.

How much of your work do you shoot in “flat picture profile” and what is your preferred way of color correcting?
This is my first digital project in a while, but I do prefer to have options in the color treatment. As soon as we began to consider visual references (Hitchcock, Polanski, etc), Kadri suggested that we consider black and white. I wasn’t sold at first, but I fell in love with the way it drew the eye to Pauline and Garrett’s faces, and to the mirrored gestures in the house next door, which build suspense at the fringes of the frame.

How frequently do you travel and do you have any tips when it comes to packing your gear?
I wish I had this problem! I don’t own any gear, but I can speak to my experience moving from NYC to Los Angeles last year when I brought a friend’s Super 8 camera to shoot the road trip. Regulating the temperature of the film stock was a concern since the car went from a chilly mountain climate to desert temperatures, but I stuck it in a cooler and was pleasantly surprised—it came out looking beautiful.

Full disclosure: This “In The Spotlight” series of interviews is sponsored by FUJIFILM.