12mm is the kind of focal length you usually see stamped on fisheye lenses, or wide rectilinear Micro Four-Thirds optics that due to their 2x crop factor are equivalent to 24mm in Full Frame. But to see a rectilinear lens of this focal length for full frame? Now, that’s interesting. Today we take a look at the Laowa 12mm f/2.8 ZERO-D. 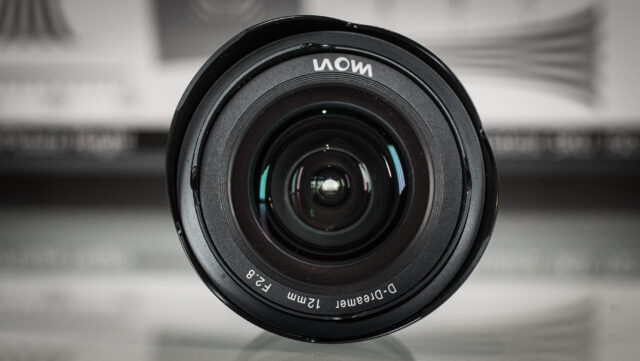 Laowa by Venus Optics is a range of very peculiar photo lenses, so much so that to call them niche would be almost an understatement. Just check out Nino’s post about the adorable Laowa 24mm Macro “Snorkel” Relay Lens here, for example.

Today we’re taking a closer look at the Laowa 12mm f/2.8. Having achieved its Kickstarter campaign goal many times over, the lens is currently available for pre-order for $949. Fortunately, we were lucky enough to get our hands on a pre-production model, with the video above being a result of some of our playing around with it.

The Laowa 12mm is a completely manual lens with clicked aperture and, in terms of build, it feels very solid, mostly due to its compact nature and strong metal casing. It also features a small removable petal-shaped lens hood, but do be aware that — as is the case with most ultra-wides — the Laowa 12mm f/2.8 needs an optional filter tray as it doesn’t have a filter thread. 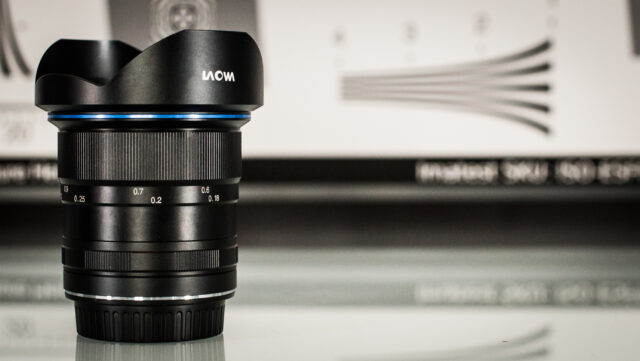 One very nice detail for video shooters is the long throw of the focus ring, offering around 300° of rotation and thus allowing for more precise focusing. The focus ring also seems like it would play well with third-party lens gears for use with follow focus systems. However, note that the focus ring on our particular unit had a bit of a grind to it which we attribute solely to it being a pre-production model. Do let us know if you come across newer models and how the focus ring feels!

One last word about focus: the minimum focal distance of 18cm is just great. It really allows you to get up close to create a large interesting foreground and exaggerate the distance to the background  – often a very desirable effect in wide angle photography.

12mm is certainly a very wide focal length indeed, allowing you to achieve magnificent vistas and exaggerate the sense of depth between foreground and background. Lenses with such an extreme focal length, however, often tend to distort straight lines around the edges of the image as if the picture was bulging outwards. This is called barrel distortion, an extreme version of this being the look of a fisheye lens.

But has Laowa delivered on its promise of close-to-zero-distortion wideness? Let’s compare the Laowa 12mm f/2.8 to some popular wide-angle alternatives, all of which approximate but not quite match the wideness of the Laowa. 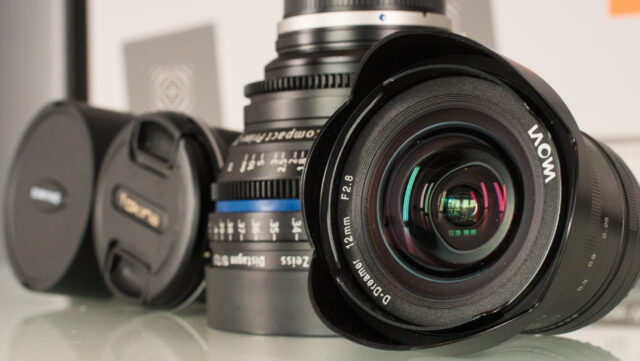 As a first comparison, we chose the very popular Rokinon 14mm f/2.8. You can see the severe barrel distortion that the Rokinon exhibits. 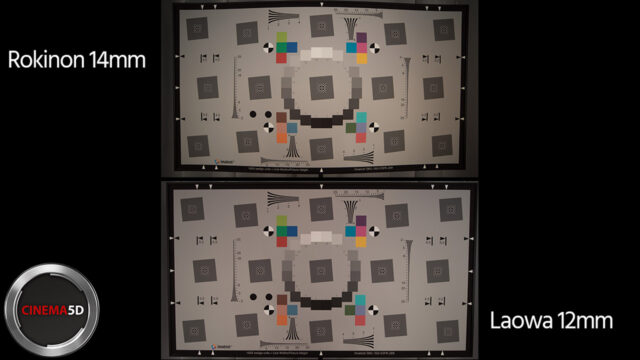 The Tokina 11-16mm F/2.8 zoom is another budget wide angle favourite. Despite it being designed for APS-C cameras, some full frame shooters find acceptable results with little vignetting at 16mm. I have included both options in this comparison shot. As you can see, there is still some distortion. 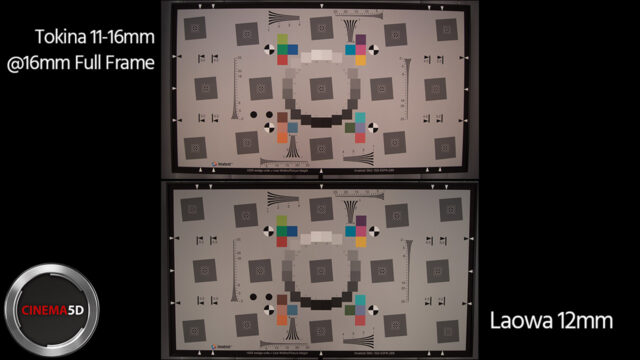 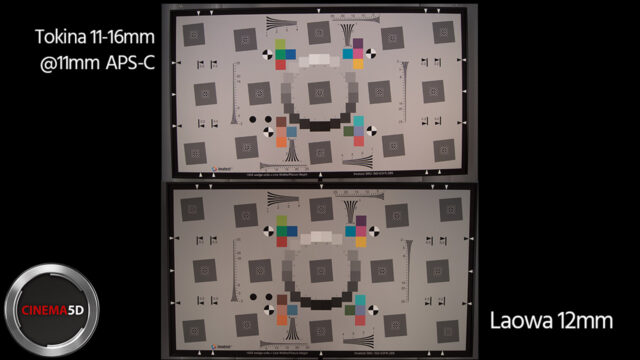 Higher up the price range we find the ZEISS CP.2 15mm. A proper cine lens costing upwards of $5,000, we can certainly expect the optical quality to outperform the previous contenders. However, the image still reveals some slight barrel distortion despite still not being quite as wide as the Laowa 12mm f/2.8. 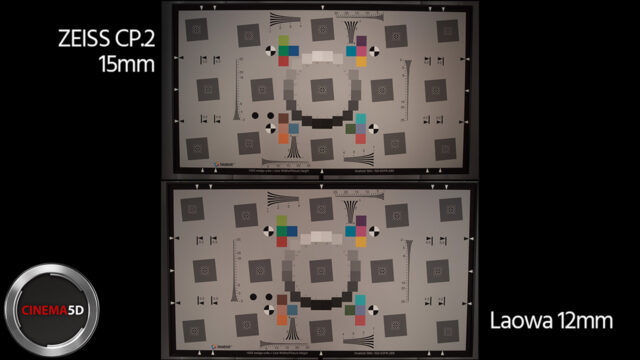 With edges straight as a ruler, the Laowa 12mm f/2.8 ZERO-D certainly delivers what it promises. But what about the other aspects of its optical qualities?

The left half of the image below shows the lens wide open, which does exhibit slight vignetting. However, this is a phenomenon common to most if not all lenses, and is greatly reduced by stopping down one click to f/4: notice the right side of the image and how the shade of background gray is much more even from the centre to the edges. 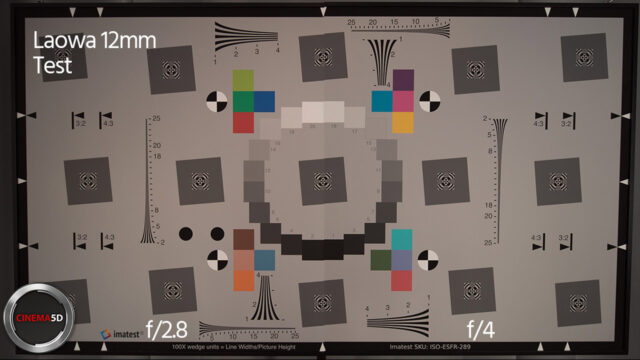 In terms of centre sharpness, the lens performs great from the get go: even wide open the centre of the image is tack sharp. 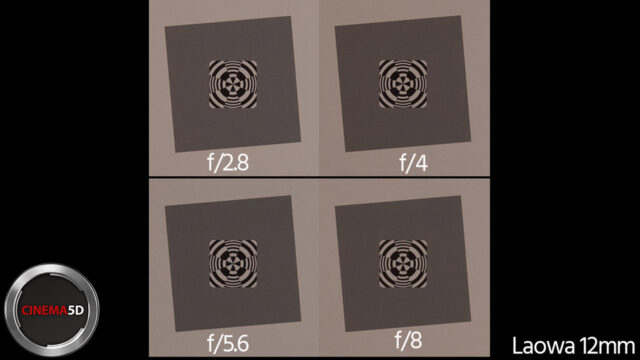 Next, corner sharpness. In the extract from the top right corner of the chart, the image is just a little bit softer in the corner when wide open, but step down to f/5.6 or f/8 and the results are much better. In fact, even f/4 is very usable! Of course, APS-C and Super35 users would be working exclusively with the sweet spot of the lens, which would still prove to be very wide even after a 1.5x or 1.6x sensor crop. 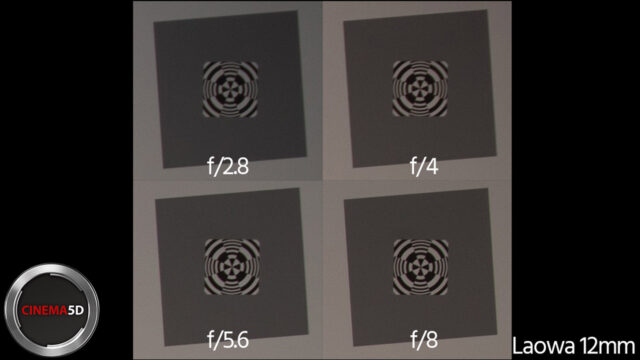 All in all, the Laowa 12mm f/2.8 really delivers what it promises. 12mm is incredibly wide — perhaps even too wide for some uses! — and the unique selling point of this no-distortion lens makes it ideal for architectural and real estate shooters. Also, the wideness can help make the shake in handheld shots a little less noticeable, and help make gimbal shots even more glidey and floaty. Sharp, solid, compact, fast and optically outstanding – it’s difficult to find negative aspects about the lens!

Sure, it would be nice to be able to use threaded filters and keep the footprint of this lens compact, and in terms of price, some may consider it a little steep for a fully manual photo lens. Of course, other wide-angle favourites such as the Canon 11-24 f/4 go for a lot more money, so a good alternative in this price range is perhaps the Tamron SP 15 – 30mm / 2,8 Di VC USD. Offering full frame coverage and image stabilisation, this fast ultra-wide zoom does offer all the bells and whistles, but weighs a hefty 1100g, almost twice as much as the Laowa.

So there you have it! Does this lens sound like something you’d like to have in your kit bag? Let us know in the comments below!