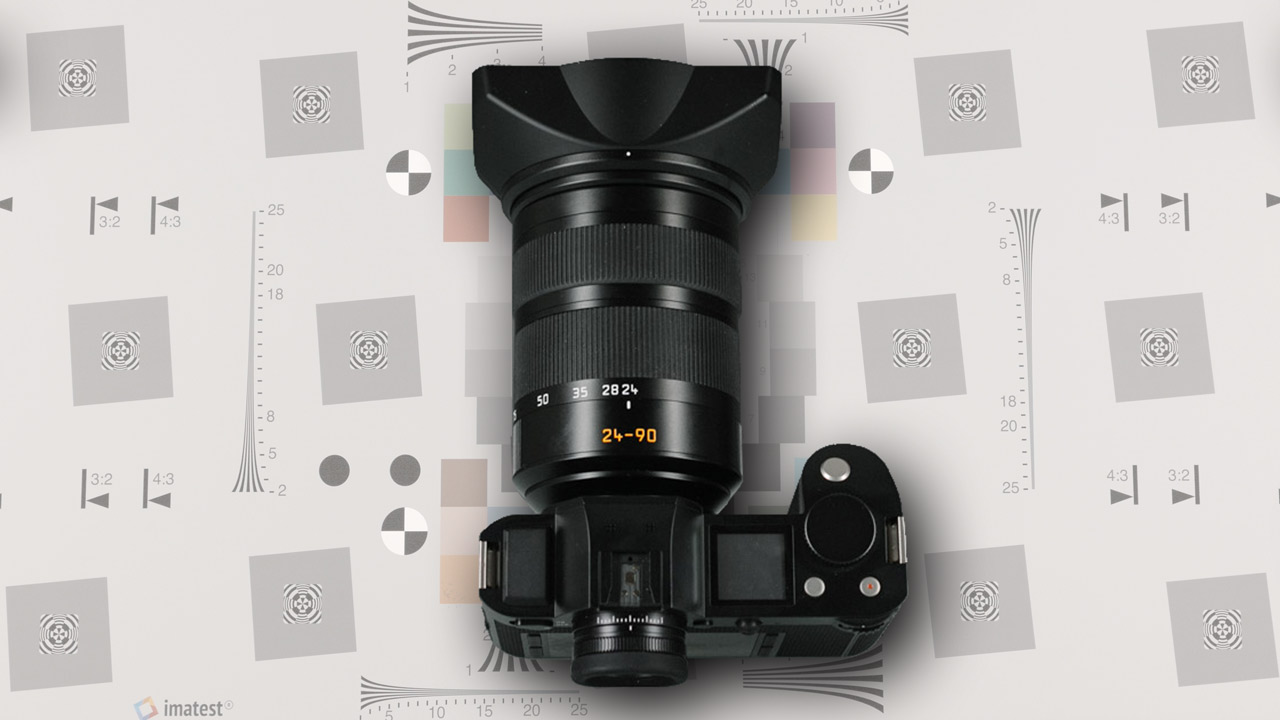 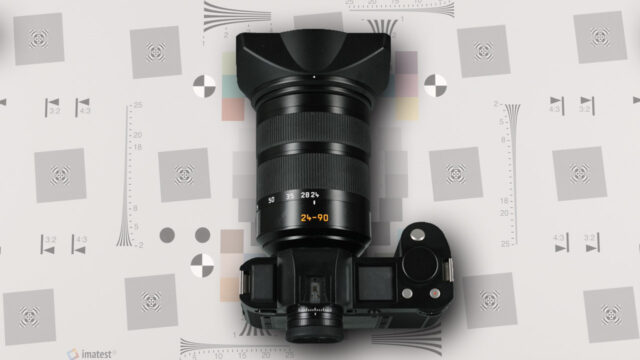 After Leica first entered the video market last year, the Leica SL is their second attempt at a 4K camera that is aimed at filmmakers. But is this camera ready for primetime filmmaking? Just like many other cinema cameras currently on the market we have assessed its qualities in our test lab and in this part 2 of our Leica SL review we will show you how it performed.

The Leica SL raised our hopes when it was introduced last October. A camera with Leica’s reputation in photography, that shoots 4K and outputs 10-bit 4:2:2 video with slow motion in HD at up to 120 frames per second. Nice. The 10 bit option is just what we’re missing on other mirrorless cameras currently available. It seems only the price of the Leica SL sours the mood.

In this lab test we found some reasons for concern on the Leica SL, but there are also good things to say. The organic image quality of this camera stands out, while lowlight performance and dynamic range could be improved.

Note: We were not able to use the Zeiss 50mm CP2 T/2.1 makro lens, which we have used to test the other cameras mentioned in this article. At the time of the review there was no compatible adapter available by Leica. Due to the nature of this particular test, the influence on the verdicts of this variation is minor, but must be noted.

Let’s start with dynamic range. A very important attribute of a camera sensor that is often overlooked and hard to measure. More often than not we find that this is where many camera sensors fail to amaze. The Leica SL is no exception. We’re testing with a DSC labs XYLA-21 transmissive test chart (More on how we test HERE).

In the chart above you can see the performance of the different cameras. The Leica only reaches a bit more than 9 usable stops of dynamic range between ISO 50 and ISO 400, while ISO 400 is slightly lower than 9 stops. (Avoid ISO 200 if possible, slight sensor pattern)

The way the camera processes the image is very very strange. The log file here looks unlike anything we’ve seen and it is necessary to overexpose in order to get your image in a “safe place”, as from a certain point in your mid-tones noise appears with sensor patterns and then the image very quickly drops into pitch black. A very unnatural looking log gamma.

In practice this means it’s very hard to expose correctly with this camera. When your scene has too much contrast you will very easily over or underexpose and if you make a mistake your shots can easily be ruined. We even had troubles to expose a normal test chart. Leica needs to address the way the image is processed. Something seems wrong here.

As mentioned above there is a lot of noise in the dark areas on recordings from this camera. This wouldn’t be so bad was the dynamic range not so limited, as this means your dark areas start where the mid tones start on other cameras.

ISO 400 is as high as you should go on this camera at any time. The reason for this is that starting with ISO 800 a very strange looking noise reduction kicks in that cannot be disabled. You will not want this kind of noise reduction in your shots as it ruins any detail in mid tones and dark areas.

This also needs to be addressed by Leica.

According to the press release in Ultra-HD (3840×2160) resolution the camera outputs 10bit 4:2:2 via HDMI. Indeed we could record an image at this size to the Atomos Shogun.

The upside here is that before rec is triggered (when the camera is on standby) the automatic noise reduction, mentioned above, does not kick in yet, so you get images above ISO 400 without the horrible noise reduction.

Yes, there’s also something positive to say. At the right ISO speeds and contrast, image quality of the Leica SL is superb. The noise looks very organic, the compression is significantly better than on the Sony a7S II and the true 4K (24fps only) image looks stunning and clean. 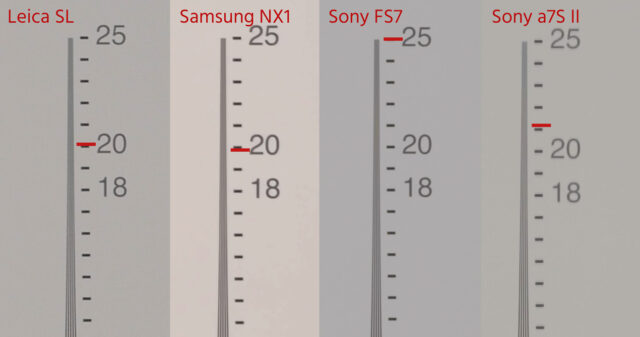 The chart above is a comparison of horizontal resolution. The Leica SL was shot at 4K, all other cameras at UHD resolution. When we see this image at its original size we notice the following:

You should know, that this is really pixel peeping here with a 400% crop. You will not notice a resolution difference when played back at 1080p. But one thing is for sure: The clean image of the Leica SL stands out and reminds us of how the Arri AMIRA captures light (see image below, 300% crop, contrast slightly matched), but the colours seem less accurate (notice the red). 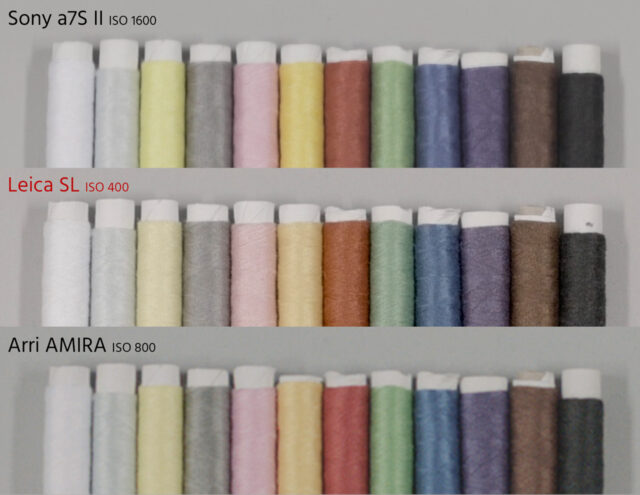 Rolling shutter behaviour on the Leica SL is about 22ms which is very similar to most other mirrorless and DSLR cameras, a bit better than the Sony a7S II, but significantly worse than the Sony FS7 for example.

This camera is very interesting. Personally I was at first very put off by the limited dynamic range and weird automatic noise reduction starting at ISO 800. But the organic, clean images the camera can produce in the right shooting environment and the well compressed video files are something to note and will have a significant impact on the look of your films.

When Johnnie shot his nice Leica SL Review Video I could see him struggle to get the camera working with the dynamic range and ISO limitations, but I could also see his positive surprise when he saw how nice the footage had turned out. We all thought that there was clearly a more neutral and organic feel to it than on a Sony a7S II for example. This lab test confirms those observations.

There are many things speaking against this camera. Not only the limited dynamic range and bad lowlight performance, but also the high price and closed off Leica eco system are a problem. Once proper adapters for a wide range of lenses become available and if the price goes down, this camera could become a serious alternative to some other large sensor video systems, especially on shoots with controlled lighting. We’re looking forward to the next Leica and possible firmware updates.

Thank you LEICA STORE WIEN for supplying the camera and lens.