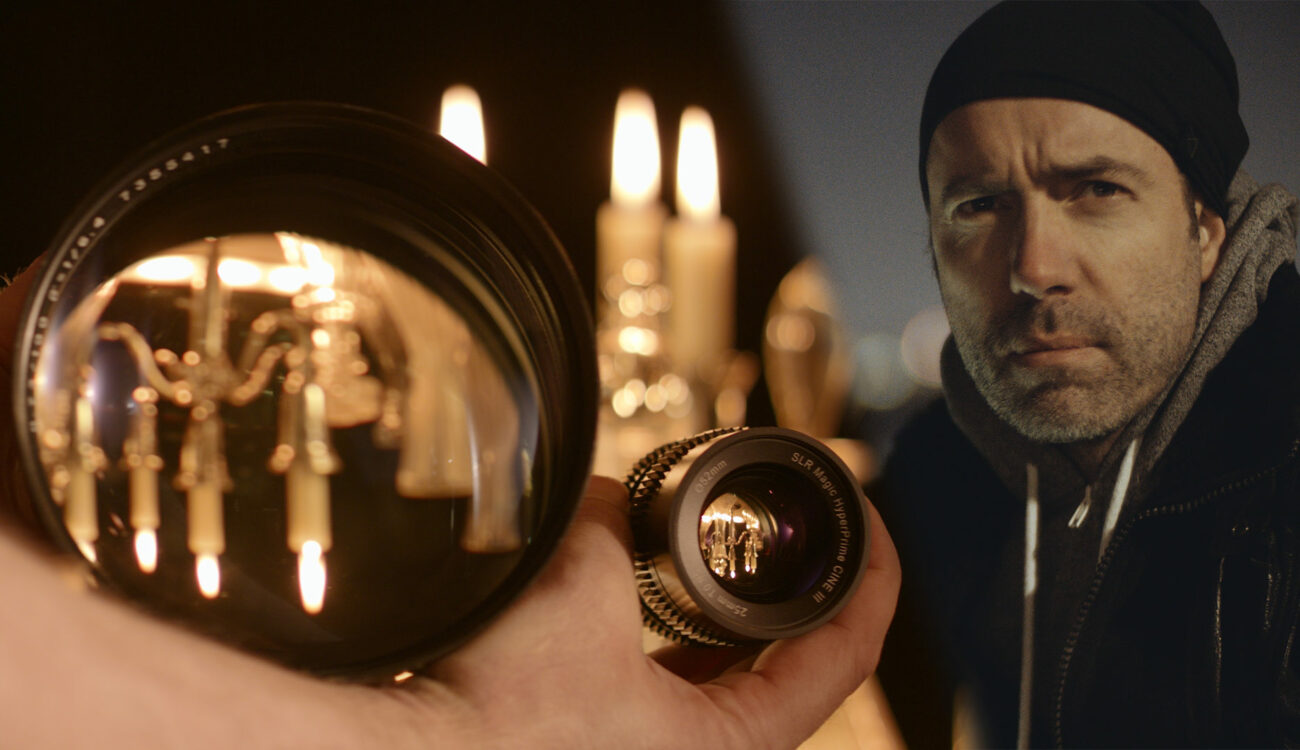 I have been following the Media Division channel on Youtube for over a year now. I think the content they produce is very useful for filmmakers and the production value of their episodes is very high. There is a lot of modding, DIY, and technical stuff in Media Division episodes – which I personally perceive as a positive factor. The main man behind the channel is Nikolas Moldenhauer – a DP based in Germany.

While I think all Media Division episodes are worth watching, in this article we will talk about the latest video, which is dedicated to shooting with ultrafast lenses – mainly with the modded X-Ray lens Zeiss R-Biotar 100mm f/0.73. As the lens covers full-frame sensors, Nikolas modded his Kinefinity Mavo LF camera to work with the extremely short flange distance of the lens.

In the video, Nikolas explains some technical background about what the f-value of a lens actually physically means. After playing with the modded setup with the Zeiss R-Biotar, he also tests some more practical alternative ultrafast lenses: 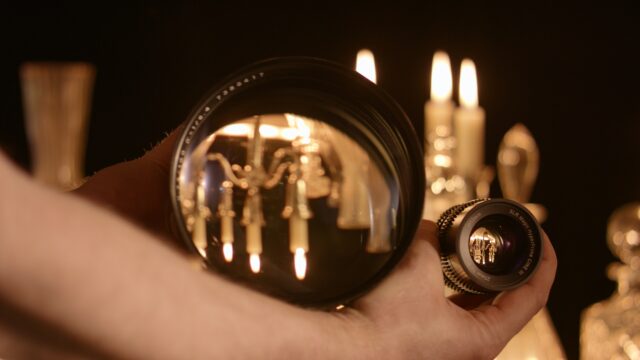 I contacted Nikolas with a few questions and, apart from his answers, he also sent me an interesting short backstory to this episode, which is worth reading in my opinion:

Nikolas: As a Kubrick fan, I always admired the cinematography of Barry Lyndon and the pure visual poetry of the candlelight scenes. During the production of our CONTAX Zeiss episode, we were in talks with Zeiss in Germany who were very supportive. In a side note, we talked about the mysterious Zeiss Planar f/0.7 – the “moon” lens. I asked if we could “borrow” it (Zeiss still owns one copy). Unfortunately, it is a permanent exhibition in a museum and I don’t blame Zeiss that they didn’t move heaven and earth to make it possible. 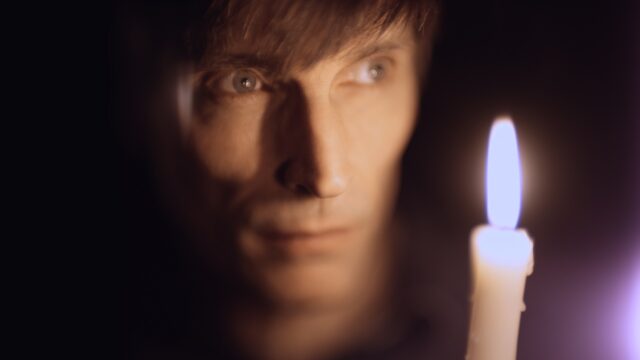 If you know anything about me… I have a hard time taking “no” as an answer.  The idea to film at f/0.7 was born, and the search for an alternative lens began. There was a rental option on the market a while ago (The “Kubrick Collection”) but that had disappeared –  after making this episode we have a pretty good idea why it did. The only available lenses fast enough that will also cover Full Frame are selected X-Ray lenses from the 60s – we bought a Zeiss R-Biotar 100mm f/0.73 for a reasonable price from eBay.

cinema5D: How many hours of work did you roughly put into this episode in total (from pre-production to the final upload)?

Nikolas: That is, of course, hard to say. Many different aspects of the episode had to be researched and problems had to be overcome – all that over a long time frame. Planing and research began in August 2019. If one includes all tests and research, scriptwriting, shooting, and post, I think this episode cost about 100 man-hours. The advanced tabletop shots were only possible with the help of our friends from TheMarmalade, who threw in a lot of hours too. 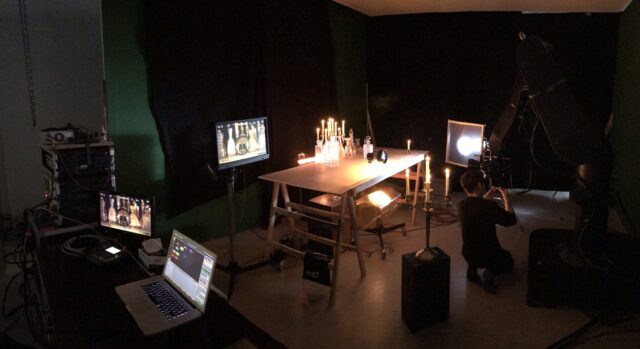 Just think of that crazy motorized macro slider that one of their SFX specialist built and of course Lyndon who operated the Spike motion control system and had so many old-school tricks up his sleeves that helped with the super shallow depth of field. We are very thankful to have such an exceptional team of creative professionals on our side that is as curios and passionate as we are. That is really priceless and that is when hours don’t matter.

cinema5D: What was the biggest challenge of this project for you?

Nikolas: The biggest challenge was modding the camera for sure. We are (obviously) no camera technicians. Kinefinity Amsterdam was helpful with reinsuring us, that we could (at least in theory) do it without damaging the camera. The rest was pretty much learning by doing… and quite nerve-racking. 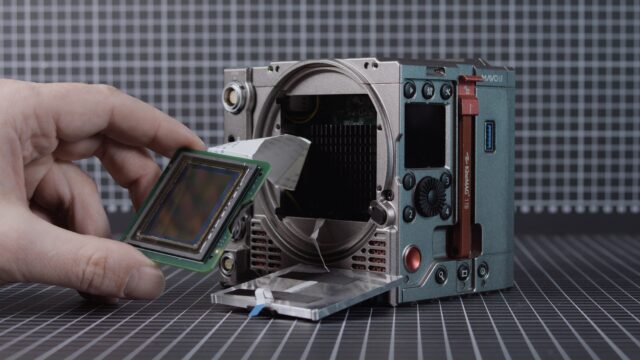 To attach the Kalori Vision ultra-thin filter array directly to the sensor was something that felt like discharging a bomb – which again was a walk in the park compared to removing it. The double-sided tape we used vulcanized during the shot. Really, don’t do this at home. Thankfully, in the end, we came out with an unmodded camera in perfect condition – and shots that were worth the effort. 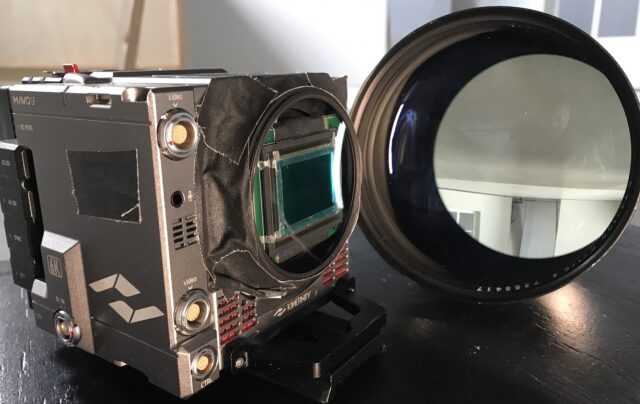 cinema5D: Can you tell us which topics are you planning to cover in the next episode(s)?

Nikolas: So many ideas, so little time… I think we will follow up with one or two shorter episodes for the “Filmmakers Compendium”, that deal with misconceptions and basic concepts in a fun way. Our next epic episode might be about anamorphic lenses as we have quite a fetish with those and I still have a huge lens from a spy plane that needs to go wild. Also, we will have to break our resolution record from last year. 32K will have to fall this year… just because. 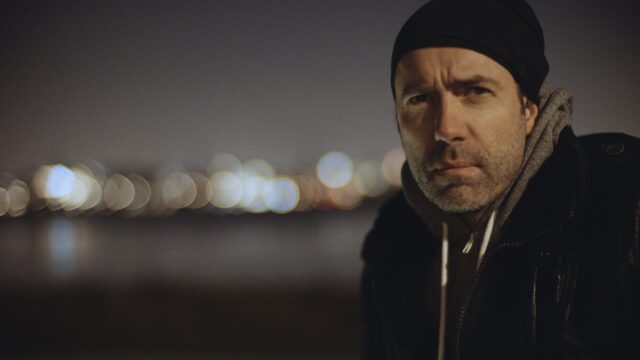 cinema5D: Is there anything else you would like to say?

Nikolas: I have to make one correction. In the video we assumed that the Zeiss Planar was designed for Medium Format. A viewer corrected us and was able to show us a document that proves, that although it was indeed fitted to a modified Hasselblad camera (standard for the Apollo project) the coverage is only something close to super35. Very unusual for an “aerial” camera/lens. This makes our Full-frame f/0.73 even more impressive and a real king of light gathering. 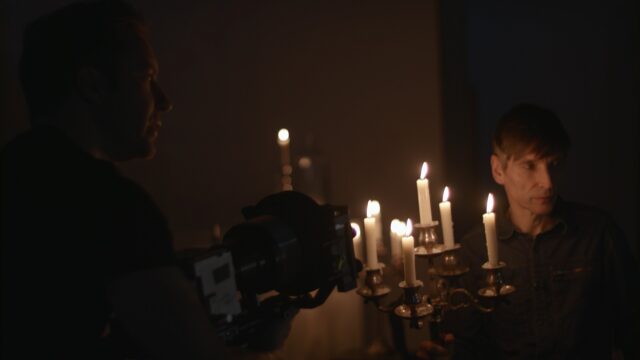 I would really like to give a huge thank you to Lyndon, Niklas, Maciej and The Marmalade for being our creative partners in this project. Also, I would like to thank Kolari Vision and Kipon for their essential gear contributions. And of course, let me give the biggest thank you to our members, whose contributions make projects of this kind possible. I love the idea that our community has this deep-seated passion and curiosity, and that the Media Division can explore to satisfy that curiosity – for them, for us, and for everybody who is in love with filmmaking. Thank you!

What do you think about the video? Have you been following Media Division before? Did you ever film with lenses faster than f/1? Let us know in the comments underneath the article.