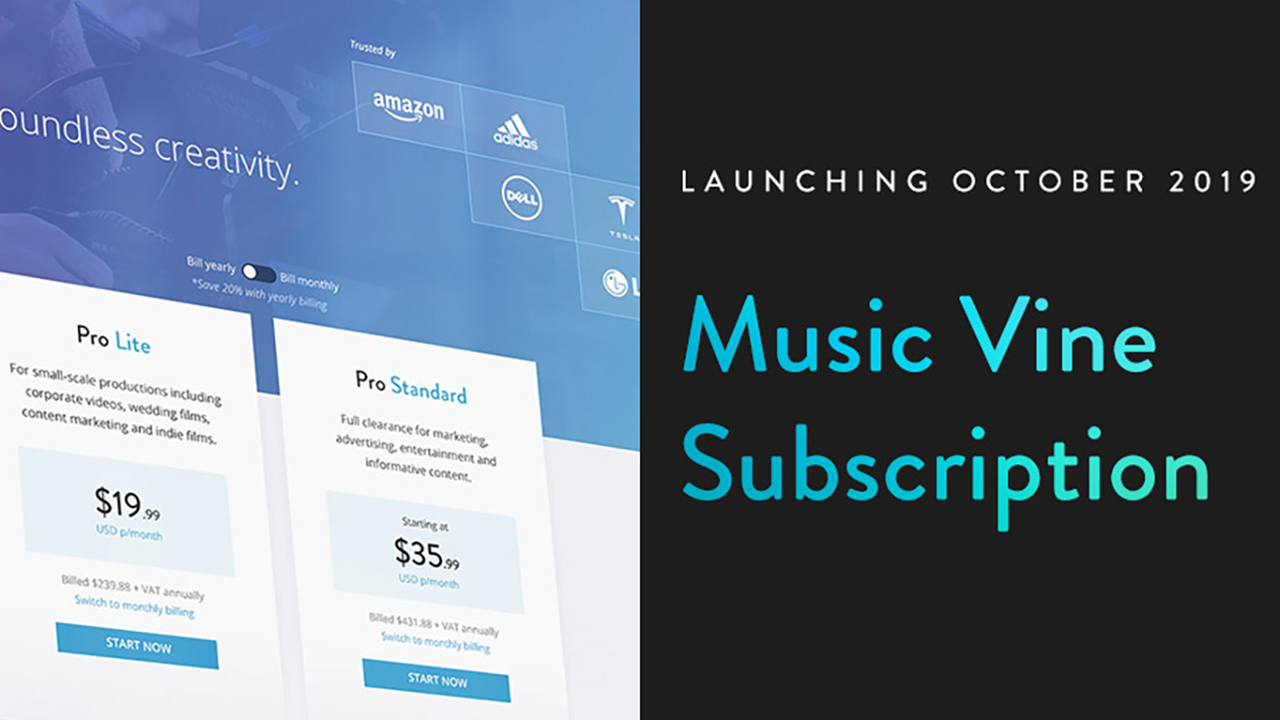 Around this time last year we reported on Music Vine’s unveiling of a complete interface overhaul. Catapulting the service into a more current design language while also improving on search and filtering, the service had massively improved on a front very much at the centre of the problem all online music licensing services face: discovery of relevant content.

The Pro branch of Music Vine’s subscription pricing is targeting businesses, video professionals, filmmakers, production companies and freelancers. Within the Pro branch there will be a “Pro Lite” tier, probably more suited to the one-man-band or similar setups, creating corporate videos, wedding films, content marketing material or smaller indie film productions with the fitting licensing models. The “Pro Standard” tier of Music Vine’s subscription pricing on the other hand would probably be suited to commercial or larger scale productions, requiring all media clearances and the like. We don’t have any detailed information on the minutia of the licensing models, but what we do have is an indication of total cost: the “Pro Lite” tier would come in at $ 19.99 / month, with the “Pro Standard” tier amounting to $ 35.99 / month, given annual billing without VAT. 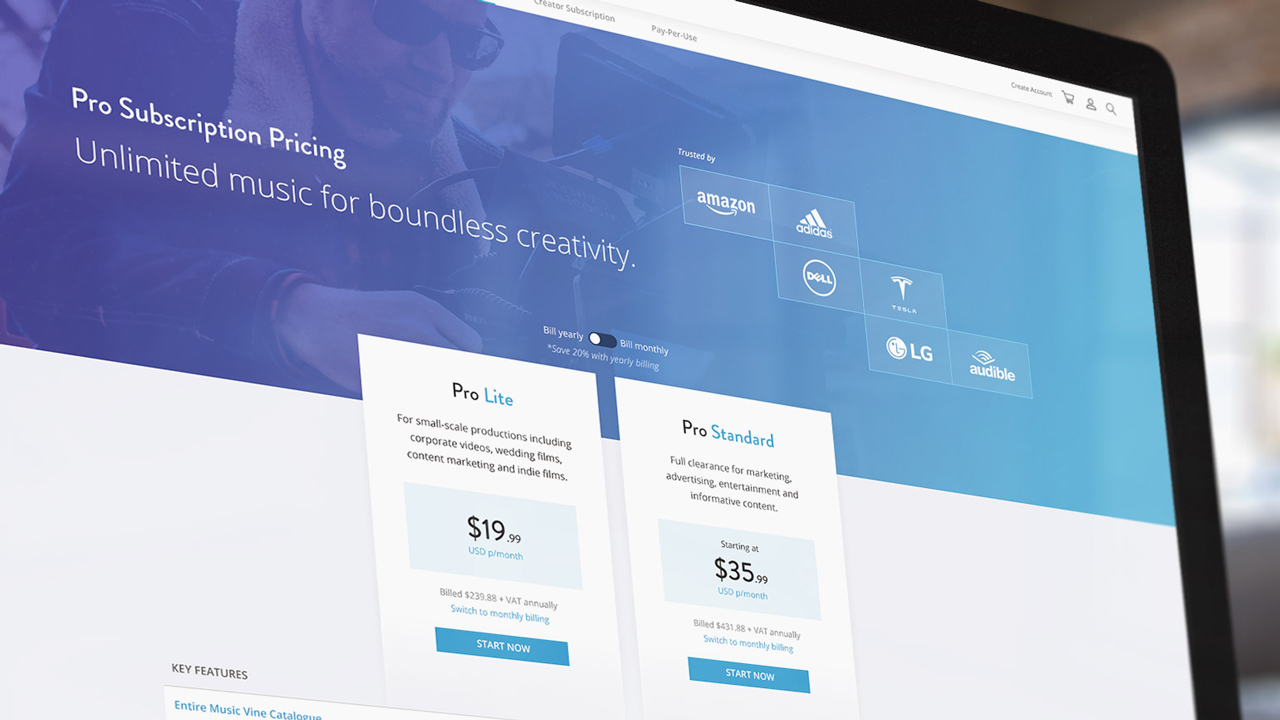 The Creator branch of Music Vine’s subscription pricing model would of course target a slightly different audience, at a slightly lower level of cost. Aimed at Youtubers, all kinds of personal social media creators its two tiers, called “Creator Ambassador” and “Creator Standard” would respectively come in at $13.99 / month and $ 19.99 / month.

Why Turn to a Subscription Model Now? 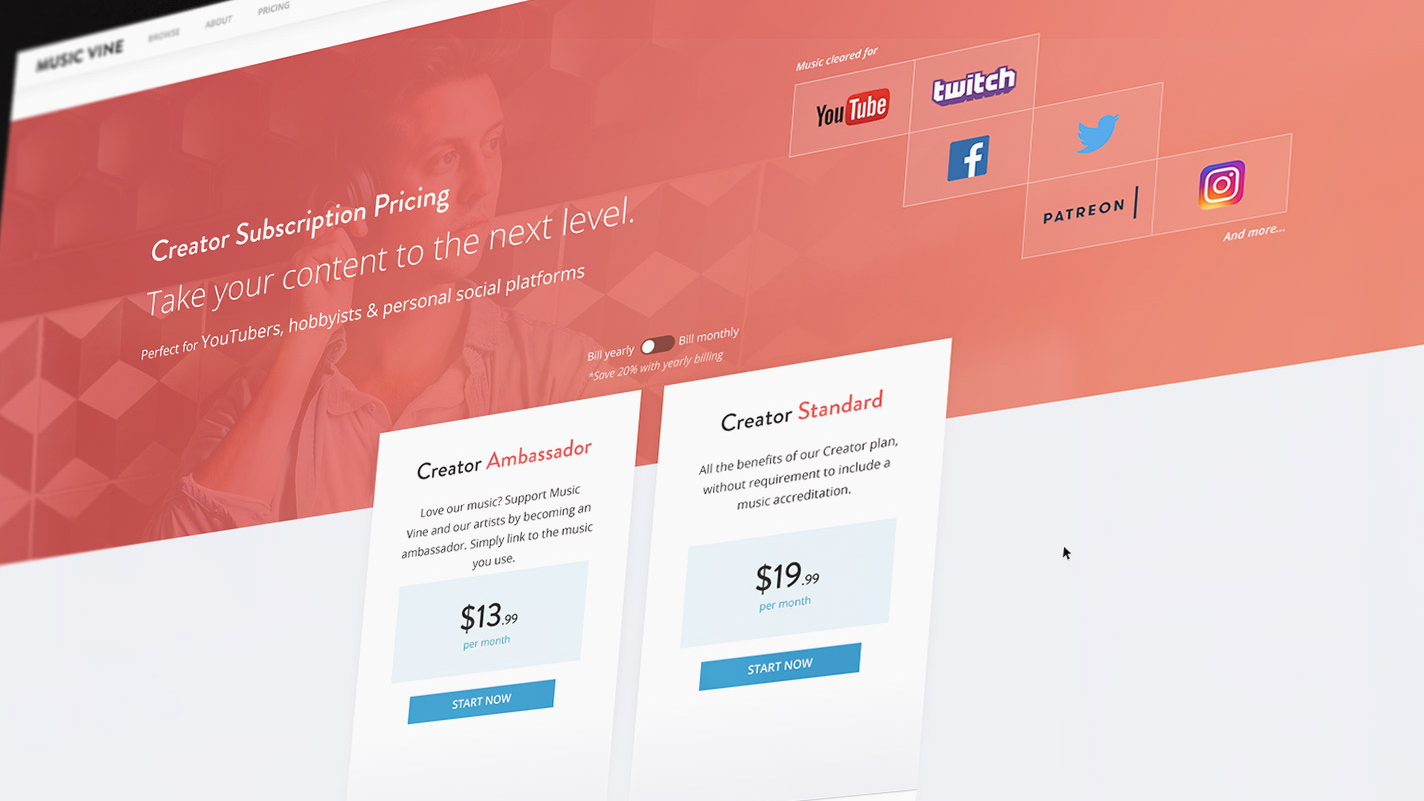 Music Vine has been around for quite a while and has seen a slew of competitors become quite successful on a subscription pricing model while evading that model themselves. Now Music Vine CEO Lewis Foster concedes that the demand for a subscription-based pricing model was indeed very large and that the production music business might be shifting in this direction as a whole. “The challenge for us has been to build a solution that is practical and attractive for filmmakers and video creators, while ensuring our artists get paid appropriately for usages of various scales, and enabling us to continue attracting the top musical talent”. Foster says.

Music Vine claims that this expansion of pricing models will coincide with a period of rapid expansion of its already large library over the coming twelve months.

Music Vine’s subscription pricing is set to launch in October 2019, next month. If you want to get notified about the launch, head on over to Music Vine’s notification page, or just keep reading cinema5D.

Full disclaimer: cinema5D is proudly using Music Vine’s music in all of its review and hand-on videos.

What do you think about Music Vine’s subscription pricing models? Are you already using their service? Will this change make you try Music Vine for the very first time? Let us know in the comments!