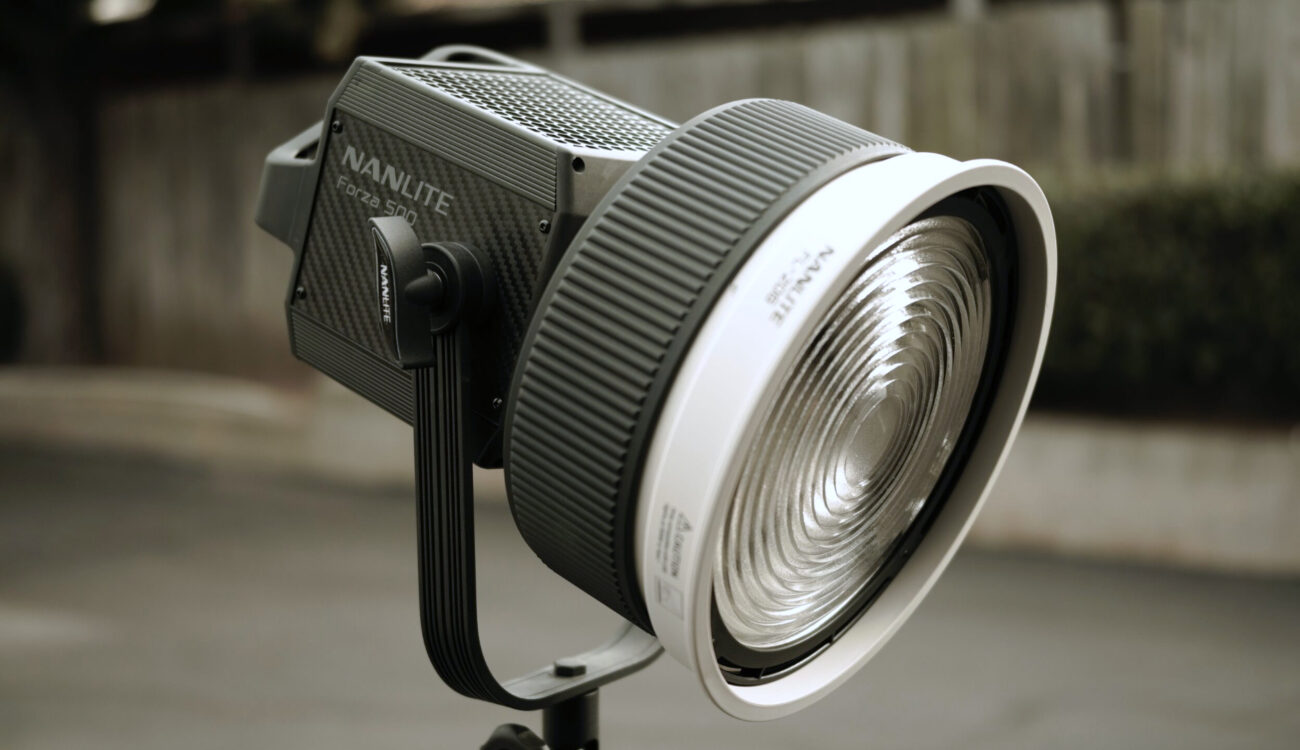 Some say we’re living in the golden age of television. It may also be true we’re living in the golden age of LED hard light fixtures. Several manufacturers continue to push the affordable LED technology output envelope with the Forza 500 from NANLITE promising to be a low-power draw key light with an excellent dollar-to-lumen output ratio. I spent several weeks shooting a network television pilot using the Forza 500 and these are my takeaways.

The Forza 500 is an $1,849 Bowens S-Type mounted daylight-balanced LED fixture that ships with a 55-degree reflector attachment and as of this writing, can be powered only by V-mount batteries or through an included AC adapter.

Despite the higher list price, I’ve seen the fixture on sale multiple times at various retailers for around $1,479. The Forza 500 weighs a little over 20 lbs. (Ballast + Lamp Head) and can be DMX-controlled with a wired connection. The real banner headline here is the output. There just aren’t a ton of fixtures with this price point that offer the same cost-to-lumen ratio.

It’s worth noting that NANLITE, NANLUX, and LEDGo are all different branches of the same company, so if you’ve used any lights from those entities, you might have some familiarity with the brand as a whole.

Anyone looking for a high-output LED daylight source that isn’t dependent on a generator may be interested in the NANLITE Forza 500. It works as a key light and has the output to compete with, but not overwhelm the sun when shooting exteriors. For V-loggers looking for a simple setup for their interior to-camera shoots, a Forza 300 is the ticket. But if you’re a current owner of the Forza 300 and you find you’re living at 100% output on your current fixture for most of your projects, you might be better served by higher overall output.

When I’m evaluating a light for the first time and I don’t have a lot of familiarity with the brand (as is the case here), I’m looking for a few things out of the gate: does the light play well with other fixtures I have on set and does the build quality suggest it can hold up under the normal bumps of production or even take a reliable place in rental inventory? And, no less importantly, does the fixture have an ecosystem of accessories that make it as flexible a tool as possible?

HMI, Fluorescent, and Tungsten fixtures were and may still be (depending on your region) a production standard, and the reason for that comes down to reliability. Drop a Tungsten lamp head and you might need to replace a bulb, but the unit will just keep on working. Of course, there are drawbacks with HMI (UV exposure) and with both HMI and Tungsten related to cost, heat, and a high-power draw, but each has proven it can take a licking and keep on ticking. Can we say the same about this current crop of LED fixtures? Only time will tell.

To me, the Forza 500 exterior has a plasticky feel, but that build also results in a lamp head weighing only about 5 lbs. Exposed heat vents that lead directly to a fan suggest this wouldn’t be the right light for high-moisture environments, but generally the overall build is very well thought out with the yoke not having that slipping issue I’ve seen with a few other fixtures. The fan didn’t get so loud the audio department complained, but I also wasn’t placing this fixture at any point during the production within a foot from my subject.

Everything ships in a semi-rigid case (pictured above) that keeps items compact and protected though not to the degree I would place a huge pelican case on it. Those of you dealing with a fast-paced grip and an electric truck in action may want to make use of a third-party hard case for extra protection or for checking on an aircraft.

A ballast/control box that NANLITE dubbed “the satellite” has a long shape to it and the ability to take dual V-mount batteries. The not-facing-outward placement of the batteries when mounted on a stand means they are protected from the odd jostle, but it also means battery swaps aren’t quite as fast. You’ll also need to remove an AC module before you can use batteries — which takes a moment. These are small concerns as the control interface itself is easy to navigate.

Depending on who you ask, V-mounts have the largest market share for batteries, but as I’m a Gold Mount user, the ability to mount only V-mounts to the Forza series is a bit of a drawback. You may not have that issue and there are a few V-mount to Gold Mount battery adapter plates out there, too. For example, here’s one from Wooden Camera.

Keep in mind you’ll need a 26V battery to power the Forza 500 and these tend to be on the pricier side, so you’ll want to factor that cost into your budget if you need this fixture to be ultra-portable. NANLITE makes a 230wh and 270wh 26V battery that is available HERE.

Back to the control interface — you’ll find you have access to some of the effects that seem to be a requirement at this point among lighting manufacturers. Flickering TV, lightning, and TV screen (to name a few) are all present here and work as you might expect for those rare light gags you might need as you move from project to project. You can also dim the Forza 500 from 0% all the way to 100% in single percent increments.

I grabbed a measurement on my Sekonic C-700U Spectrometer of how accurately the Forza 500 handled the daylight color temp (K/Kelvin) and output (lx and fc) at a distance of 3ft. Here are my readings with a target of 5600K with the fixture set to 100% output using the reflector accessory:

I hit a kelvin temp of 5436 with a target of 5600K — excellent and well within a normal margin of error. Accessories also tend to shift kelvin temperature one way or the other and I was using the included kit reflector for this reading.

The output reading of 40,800 lux at 3ft is also excellent. This is a very bright light. High marks here for both color handling and output.

NANLITE was nice enough to send me their Para 120 softbox ($169), Para 150 softbox ($199), and Fresnel attachment for testing alongside the Forza 500. These three gave me a taste of the flagship accessories you might want to consider for your hypothetical Forza 500 purchase.

The NANLITE Para 120 softbox with silver interior easily expands to make a 47″ soft source and the Para 150 expands to 59″ to make an even softer, but perhaps a bit more cumbersome-to-setup-and-move source. For multiple location fieldwork, I’d recommend the Para 120 and for those looking for a great studio solution where the softbox lives on the stand (I suggest a rolling combo stand like this) for long periods, the Para 150 in conjunction with the Forza 500 makes for a gorgeous and flattering key light.

The 10-to-45-degree ($209) Fresnel attachment has a plasticky feel, but this accessory does include metal 4-way barn doors that act to cut down on grip needs for lighting control on-set. It’s worth noting that the NANLITE Fresnel attachment is almost double the cost of the Aputure Fresnel 2X. Note that but Aputure doesn’t include the barn doors with their more affordable accessory and you don’t get quite as much freedom with your beam angle in the case of the Aputure Fresnel 2X: 12-to- 40-degree. More on Aputure comparisons below.

In general, I was impressed by the quality of the three accessories that NANLITE sent for review. Lighting companies might make a great light, but sometimes the ball is dropped in the accessory department. This is definitely not the case here. Keep in mind that all the accessories I’ve mentioned also work on the Forza 300, so that’s something to keep in mind if you’re interested in cross-compatibility.

Perhaps it’s the recent release of the Aputure 600d Pro (read my review here), but I’m seeing NANLITE most often compared to Aputure online and that comparison makes sense given the similar price points. The Forza 300 has a list price of $1000 as compared to the Aputure 300d MK II price of $1099. The lamp heads for each brand have a similar exterior look and both accept a Bowens mount.

However, I am hearing that despite Aputure and NANLITE both having a stellar ecosystem of Bowens accessories, it’s not a perfect crossover. So, do your research before making a purchasing decision on using an Aputure accessory for a NANLITE product or vice versa.

Aputure has the edge on general fixture control at this point with the 600d Pro having wireless DMX capability alongside a Sidus Link Bluetooth App that is improving daily via updates. For now, if you don’t have a wired DMX setup, you’ll need a $300 Wi-Fi adapter accessory to control the Forza 500 remotely with the NANLITE App (Android or iOS).

If you are locked into the NANLITE ecosystem because of a past Forza 300 purchase, then you’ll find everything from a variety of soft boxes and grids to a Fresnel attachment –with seemingly more accessories announced from NANLITE every day.

There are a plethora of LED offerings on the market right now with NANLITE’s Forza 500 fixture cutting a promising path. I look forward to the company continuing to build on the Forza platform as Bluetooth connectivity is improved and wireless DMX is potentially added.

Including Gold Mount capability into the mix atop what is already excellent output will be helpful in the future. The NANLITE Forza 500 is a great addition to the many choices we filmmakers have when it comes to lighting tools.

What do you think? Is LED here to stay and has it taken over your bag already? Share your experiences in the comments below!