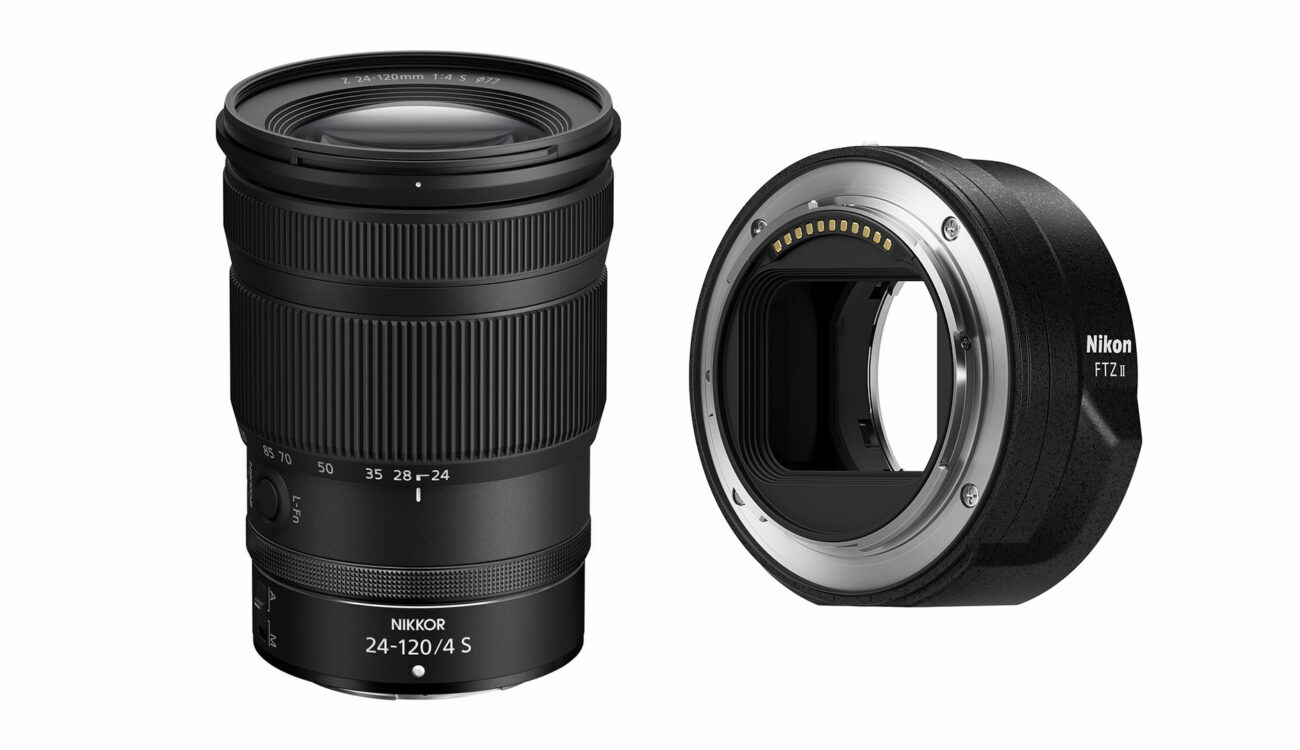 Along with the Nikon Z 9, the company also launched a couple of new lenses, including the NIKKOR Z 24-120mm F/4 S. Also, the company released the FTZ II, the second version of its Nikon F to FZ lens mount adapter, which is smaller than its predecessor and without a tripod socket. Let’s take a closer look at them!

The Nikon Z 9 made a lot of waves with incredible photo and video capabilities. Still, it was a tree hiding the forest, as the company also released the NIKKOR Z 24-120 F/4 S and FTZ II lens mount adapter.

The Nikon NIKKOR Z 24-120mm F/4 S is a standard zoom lens that has a 5-time zoom range and a constant F/4 maximum aperture. This lens is part of Nikon’s S-line of lenses, which is the brand’s premium lineup. It covers APS-C and Full-Frame sensors.

This lens is pretty lightweight at only 630g/1.38lbs for a length of 11.8cm/4.64in. On the lens itself, you’ll find a focus ring, a zoom ring, and a function ring that you can assign to ISO, aperture, exposure compensation, and so on.

Also, there is a customizable L-Fn button that can be used to quickly activate/deactivate subject tracking, AF Lock, image playback, and more.

On the inside, the NIKKOR Z 24-120mm F/4 S features two STM stepping motors that move in sync for fast and accurate autofocus performances. According to Nikon, this AF motor design allows “ultra-quiet focusing and suppresses focus breathing,” essential for filmmakers.

The lens design of the NIKKOR Z 24-120mm F/4 S is pretty complex and consists of 16 elements in 13 groups. There are three ED glass, three aspherical, and one aspherical extra-low dispersion glass element to reduce chromatic aberrations.

In terms of coating, the lens benefits from a Nano Crystal and ARNEO coats to minimize reflections, ghosting, and lens flares. Also, there is a fluorine coat on the front element to reduce fingerprints and make cleaning the lens a breeze.

The aperture diaphragm consists of nine round aperture blades for smooth and creamy bokeh. The minimum focusing distance is 35cm/1.15ft. The front filter diameter is 77cm.

Last but not least, all moving parts of the lens barrel are weather-sealed to keep out dust and water droplets, and the lens mount has a rubber gasket.

The Nikon FTZ II lens mount adapter is the second version of the company’s F-Mount to FZ-Mount adapter. This new iteration is smaller than its predecessor and does not have a tripod socket. If you’re getting yourself a Nikon Z 9, the FTZ II mount adapter will be a better fit.

Of course, if you use Nikon F lenses, this adapter will still give you autofocus capabilities and weather sealing.

What do you think about this all-in-one Nikon zoom lens? Do you think an F/4 standard zoom lens is enough for most of your needs? Do you already have Nikon F lenses that you wish to use on the upcoming Z 9? Don’t hesitate to let us know in the comments down below!